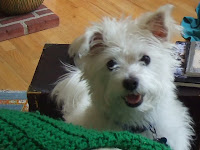 It was the end of June, a Sunday. Meu marido, Tom, and I took our dog, Benoni, to Central Park for the day. After walking for hours, we exited the park 20 blocks from where we had parked the car. De repente, the gray skies opened and the rain poured down. Benoni (or Benny, as we call him) refused to walk, lest his little precious feet get wet. So I picked him up and carried him (Tom had the umbrella and the tote bag) for those 20 blocks.

Let me digress and tell you a bit about Benny, in case you are not familiar with him. Benoni had been a stray and ended up in an overcrowded pound with a 1-week time limit. Felizmente, another shelter, Animal Lovers Liga, rescued him and he lived there for a month before we found him on Petfinder. We had recently lost our 14-year old Westie, Cachorrinho, to cancer, our hearts were broken and we swore we would never get another dog. Then we saw a picture of a little dog that looked like a Westie shrunken into a tiny package and decided to give him a home.

At first, Benoni was 5 lbs of skin and bones and very traumatized. He was afraid of other dogs, animals and people and would shake, whimper, scream and cry but now he is 9.6 lbs of friendly, loving muscle. We learned about reactivity, calming signals and dog language and Benoni learned safety, security, and social skills. He now loves attention and insists on saying hi to every dog and person he passes. Na verdade, he will bark if he is ignored! Benoni loves to play, cuddle and get belly rubs and gives us a gazillion kisses.

Back to main story – I was carrying Benny and my back was hurting, especially because I have a herniated disk. As I shifted Benny’s weight yet again, Perguntei, “Since when does 9.6 lbs feel so heavy?” and wished aloud that I could put those 9.6 lbs down and let him walk himself to ease my load. Bem, I guess Benny was insulted because he asked, “Why don’t you lose 9.6 of your own pounds?" (Sim, my dog talks to me. Doesn’t yours??? Don’t judge me!!) Then he issued me a formal challenge: to lose 9.6 lbs (or one Benoni unit) by the end of summer or September 1st, the day I returned to work.

The Benoni Challenge was on! I got out my Vigilantes do Peso tracker and started counting my points in earnest. I got serious about journaling what I ate. I walked more than ever. By the end of the first week of July, I had gained 0.2 lbs. Opa! Then I lost a couple of pounds and was back on the right track. After an evening at a jazz bar and too many tortilla chips and guacamole, I weighed more than I did when the challenge began. And so the summer went on, with ups and downs (too many ups, not enough downs). In July, I celebrated my one-year anniversary since going veg (my vegiversary). Verão!

Yesterday was September 1st. Summer vacation was over and it was time to return to work. It was also time to get on the scale and see the results. Benny was watching, anticipating, I swear I could hear him snickering. I stepped on, saw my weight, and did the math. I had lost…9.6 lbs. Ganhei! Eu fiz isso! I lost one Benoni unit. Sucesso! Victory!

“Not so fast,” Benny said. “Remember you rounded the challenge up to 10 lbs. You did not lose 10 lbs. You owe me 10 new squeaky toys. Desculpe, Mommy.” He trotted away, his tail wagging in glee.

He was right. In my bravado, I had rounded it up to 10 lbs. Had I left it at a true Benoni unit, I would have won but I got greedy. Agora, I have to go shopping for 10 new squeaky toys. But that’s ok. I’m 9.6 lbs. lighter bringing my total loss so far to 90.2 lbs. I may not have won the Benoni Challenge but I am proud of what I accomplished this summer. Além de, I would have bought Benny the toys even if I had won the challenge (but don’t tell him that; he’s already planning the next one).