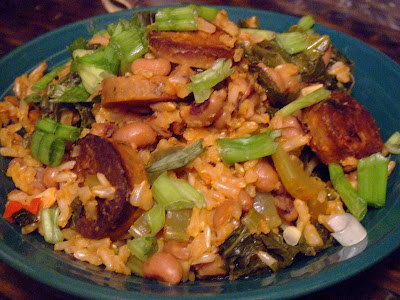 New Year’s is approaching along with many traditions: Eve de Dick Clark de Rockin Año Nuevo, counting down the end of the year while waiting for the big ball to drop in Times Square, partes, champagne, midnight kisses and resolutions most of us probably won’t keep.

One delicious tradition is eating Hoppin’ John, a Southern version of the rice and beans dish that has its origins in African, French and Caribbean cuisine. The dish is usually made with black-eyed peas (or field peas in the Low Country of South Carolina and Georgia), cebolla, pimientos, spices and some type of pork. Black-eyed peas, also called cow peas, are thought to have been introduced to America by African slaves who worked on rice plantations.

Eating Hoppin’ John on New Year’s Day is thought to bring a prosperous year filled with luck and who couldn’t use some more luck in the coming year? The peas are symbolic of coins and sometimes, a shiny coin is buried in the black-eyed peas before serving. Whoever finds the coin is his or her bowl is supposed to have good luck throughout the year (be sure to find the coin before eating or the Heimlich maneuver will become a new tradition). Alternativamente, the coin could also be hidden under the dinner bowls.

However the dish got its name and whatever its origin, one thing is for sure – it is delicious. So here is my vegan version of Hoppin’ John. If you make it with salchicha sin gluten, the dish is gluten-free. Enjoy a bowl or two of it, on New Year’s Day or any day.

I wish you all a New Year filled with the wealth of health, happiness, peace, amor, compassion and who knows, maybe even some of the green kind. 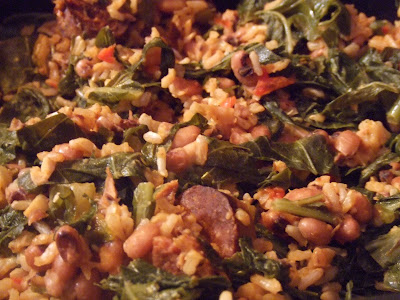 Nota: if you don’t have jerk seasoning, you can make your own blend. The following ingredients make 1/2 cup of seasoning so you can use what you need here and save the rest for later use or cut the recipe to make just what you need:

Combine the black-eyed peas, 3 cups water and a pinch of salt in a small pot. Cover and bring to a boil. Mientras tanto, heat the olive oil in a large, profunda sartén a fuego medio. Add the vegan sausage and cook until browned, acerca de 2 acta. Add the scallion whites, apio, ajo, jalapeño, jerk seasoning and a pinch of salt. Cook until the veggies brown, acerca de 5 acta.

Add the thyme and tomato paste and cook, revolviendo de vez en cuando, acerca de 2 acta. Añadir el arroz, bay leaves and the black-eyed peas with their liquid to the skillet and bring to a boil. Do NOT stir.

Add the greens; cover, reduce the heat to low and simmer until most of the liquid is absorbed, acerca de 30-45 acta (if you use long grain brown rice, it could take up to an hour). Set aside for 10 más minutos. Remove and discard the bay leaves. Add the scallion greens and fluff the rice with a fork. Disfrutar! 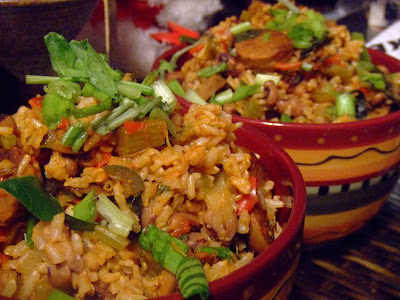