Venturing across Central Park to the Upper West Side, Tom and I set out to meet our friend. The streets were busy in that “bustling yet laid-back” UWS kind of way with tons of people dining outdoors along the streets. We found Peacefood Café, a Vegan kitchen and bakery, whose slogan is “Eat differently,” on the corner of Amsterdam and 82nd and were given a wonderful table in the back where we had the perfect view of everything.

In the front is the counter and bakery section filled with so many delicious looking temptations, you could forget to keep walking towards your table. 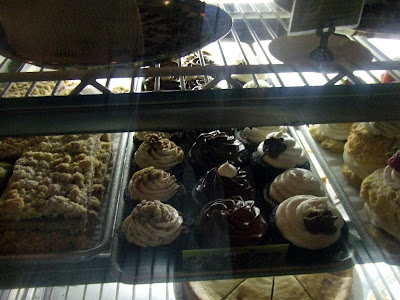 The Café is airy and spacious, the décor is calm and lovely – sage green walls, soft lighting, iron baker’s racks, wall hangings and large, comfortable seating. Relaxing music adds to the serene atmosphere. Even when the restaurant filled up with couples and groups of people having a good time, it never felt too loud or too crowded. It felt…well, peaceful.

Now I have to admit that before we decided on Peacefood Café, I had read some reviews. I often try to not do that because I don’t want to be swayed by other people’s opinions but I was curious to find out what the best offerings were. Peacefood Café has several reviews added on to their menu online. Most of them are good but the one that really sparked my interest (and anger) was the review by Gael Greene “Breaking Spelt Bread with Vegans at Peace Food on Amsterdam.” While Ms. Greene seemed to enjoy most of the food, she never stopped mentioning how the Vegan versions fell short of her favorite carnivorous dishes or her shock that a group of diners might not want to hear stories about people she knows who were Vegan but went back to eating flesh. Ms. Greene seemed perplexed that one’s coffee would come with a choice of non-dairy milks and in my opinion, she was disrespectful to the owner, Eric Yu, by referring to him as a “Disney elf.” She ends her review by saying, “And you might want to stop if only for the anthropological adventure.” I have to be honest, that review riled me up so much, I had no choice but to channel my inner Margaret Mead and try Peacefood Café for myself.

The best thing about going to dinner with more than just 2 people is that you get to order more dishes so we sampled 3 apéritifs. 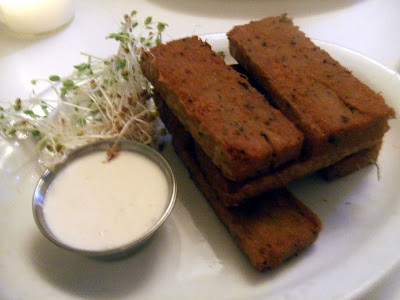 The famous chickpea fries ($7) got their reputation for a reason. They are large, croustillant, épicé et addictif. Ils viennent avec une sauce crémeuse de trempage de la maison. This is definitely one of those appetizers where you start negotiations over who gets the last one. 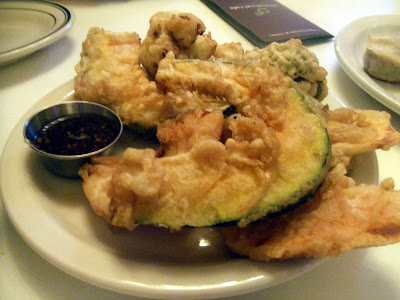 We also had the Vegetable Tempura ($8) – perfectly breaded broccoli, squash and other veggies accompanied by a minced daikon, ginger and mustard soy sauce. The tempura was crunchy on the outside, the vegetables firm but soft on the inside. 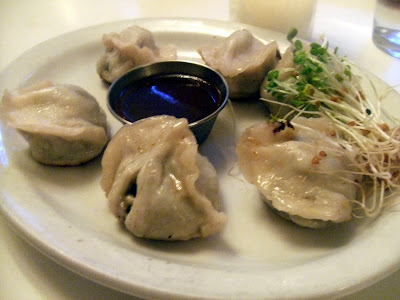 Our third appetizer was the Pan-Seared Shanghai-Style Dumplings ($7). They are “homemade dumplings filled with Chinese chives, shitake and wood-ear mushrooms, marinated tofu, and vegetarian protein served with a ginger balsamic dipping sauce.” The dumplings were delicious, generously filled with the delectable mushroom mixture. Our appetizer plates were empty in no time with only a lone sprout or two as evidence there was ever food on the plates.

On to the entrees, what to choose? There are salads, pizzas, sandwiches, soupes, paninis, mixed vegetable plates where you can pick and choose what you want, raw options and nightly dinner specials. I kept looking at other tables to see what people were ordering. There was one couple sitting near us whose food was tempting me since it arrived at their table. The woman had a delicious looking salad, a large pile of greens and what looked like baked tempeh (I’m guessing it was the Asian Greens salad) and her companion had a veggie-filled sandwich that was so big he only ate half of it. I would have asked them what they ordered but I didn’t want to interrupt their dates (him with his iPad and her with her phone; now that kind of behavior warrants an anthropological study to me).

De toute façon, after a long and repeated reading of the menu, we finally made our choices. Tom had one of the dinner specials – the combination PFC un-chicken basket with cold sesame noodles ($12.50). The un-chicken resembles fried chicken fingers and they were extremely yummy as were the noodles. Good comfort food minus the cruelty. 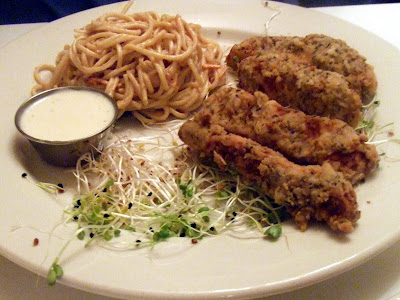 I chose the fried seitan medallion Panini ($11.95). It comes with cashew cream, arugula, tomatoes and pesto served on their homemade toasted focaccia bread. The Panini was so indulgent – soft seitan, creamy toppings and the best, crunchy, toasted focaccia I’ve had yet (and I am very picky about bread). 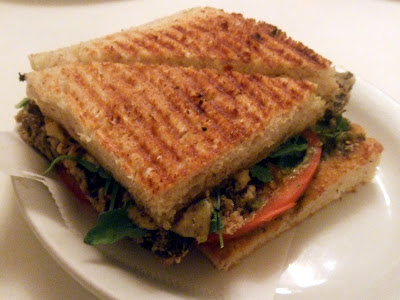 Our friend had another of the dinner specials – the Green Thai Curry ($12.50) which is “tofu and assorted vegetables with curry and coconut milk served with Indian basmati rice and jicama salad.” It was spicy and intensely flavorful. Encore une fois, our plates went from bountiful to empty. 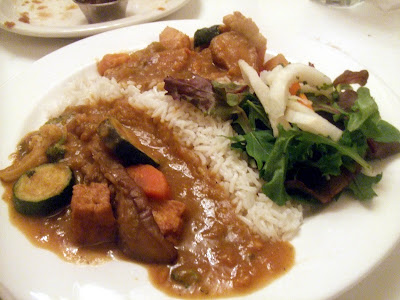 The menu also offers a wide selection of juices, smoothies, hot and cold drinks but no alcohol.

We may have already been full but we were celebrating a birthday so dessert is required (if only to embarrass the birthday girl by having her dessert arrive with a candle). Not being a dessert person, I usually just take a bite of whatever Tom orders but since writing these reviews, I’ve taken my responsibilities more seriously (the public has a right to know) and so I ordered my own dessert (though most of it did go home with me). 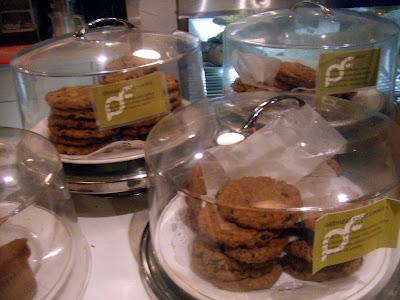 There is a huge dessert/bakery menu to choose from and seeing our struggle, our waitress, Talia (a very sweet young lady who looks like a young Alyssa Milano from Charmed), suggested we go look at the desserts in the counter up front. Tom ordered the chocolate ganache cake ($5.25) which I tasted (out of duty, bien sûr). It was rich and sinfully decadent.

Je, bien sûr, ordered the carrot cake ($5.95). It’s my favorite kind of cake and so I must sample every Vegan version that exists. This one did not disappoint. The cake was soft and moist and the frosting was refreshing and tangy. 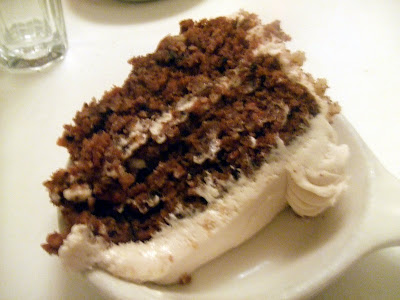 The birthday girl ordered the strawberry shortcake ($5.95) which she loved. The shortcake was flaky and light and the strawberries tasted fresh and succulent. This shouldn’t be a surprise since all the desserts at Peacefood Café are baked on premises. They contain no dairy, eggs or refined sugars. They also offer several gluten-free and raw desserts. 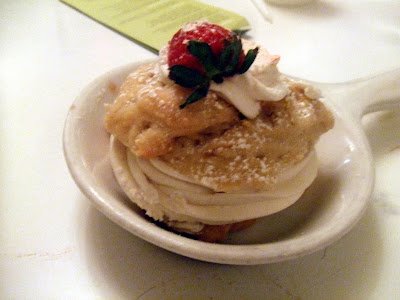 This time our plates weren’t empty but it wasn’t for lack of trying. We wrapped up the rest of our desserts to go and also threw in some gluten-free macaroons ($1.50) and a couple of veggie savory biscuits ($3.95) to enjoy another time. As an aside, that time came the next evening and all I can say about those savory biscuits is OMG! They are moist, flaky biscuits filled with a colorful variety of vegetables and cheddar Daiya cheese. Eating it, I felt a sort of religious conversion and this “salt-tooth” girl may never eat another potato chip again. Not when there are savory desserts like this in the world. 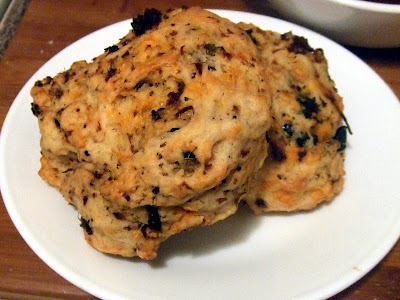 Besides all the incredible food, the service was friendly and attentive. Even though the restaurant filled up (it was a Saturday night), no one ever rushed us and we spent several hours enjoying our celebratory dinner. Every single person on staff smiled, made jokes, and made us feel welcome. That’s an unusual experience for us on the UWS or most places in the city, for that matter.

We even had the privilege to meet the owner, Eric Yu, who was very friendly and courteous. He asked Tom several times whether we were enjoying ourselves and wanted to be sure everything was to our satisfaction (and he didn’t even know a review was coming). M.. Yu obviously takes great pride in his restaurant and he should. The menu states that Peacefood “strives to be an innovative and exceptional Vegan café…prepared and served with mindfulness, gratitude and the intention to nurture…endeavoring to ensure that your eating experience…is joyful and memorable.”

Eh bien, M.. Yu, we certainly felt nurtured. Our experience was both memorable and joyful and the gratitude is all ours. We will definitely be back.