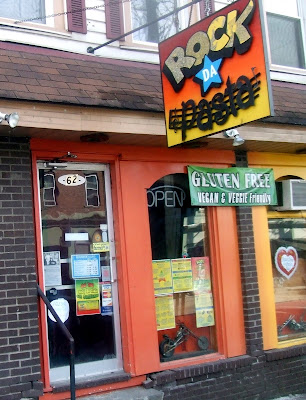 We all know how this story goes: you decide to dine out but not at a Vegan restaurant. You anxiously anticipate the meal, wondering what you are going to eat – a salad, a dry baked potato, maybe pasta with marinara sauce or a veggie wrap minus the cow pus…uh, I mean cheese. You dread the fact that you are probably going to have to play 20 Questions with the waitstaff – what’s in that? How is that prepared? Is it cooked on the same grill as the meat? And if you’re feeling brave, you might ask for some Vegan accommodations and hope they don’t look at you like an alien, or worse, ask you if you would like the fish (AAACK, FISH IS NOT A VEGETABLE!!). And what if you’re gluten-free??? Well, then you had better just order a glass of water…or you can go to a restaurant that truly rocks, Rock Da Pasta.

Located in the college town of New Paltz, New York, Rock Da Pasta is a unique place that is a mix between great dining and the Rock and Roll Hall of Fame. The owners fused their two loves of music and food into a Billboard hit of an eatery. And while Rock Da Pasta is not a Vegan restaurant, they bring the concept of accommodation to a whole new level. I don’t usually review non-Vegan restaurants but about 85% of their menu can be made vegetarian or Vegan with gluten-free pasta, garlic bread and pizza available upon request. And by request, they mean when you sit at the table and order; no need to call in advance to warn them. 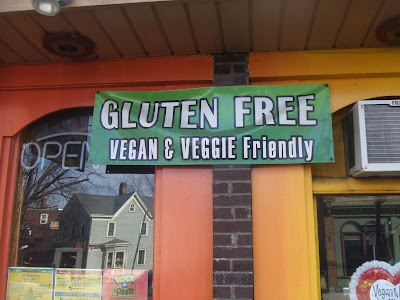 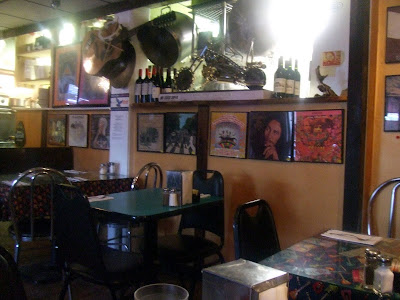 There is a counter at the window where you can sit and watch people stroll down Main Street or you can choose to sit at the bar which is like no other I’ve ever seen. The bar stools have multi-colored electric guitars for backs! I wish the pictures were better but the restaurant is dimly lit even in the daytime; the tables are candlelit at night. And of course, the music is an eclectic mix of the many generations of rock ‘n’ roll. 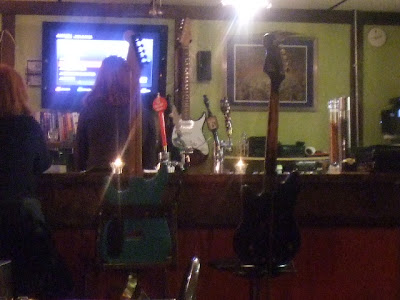 The menu, which the owners took over a year to develop, is so much fun to read. It starts with Opening Acts – appetizers, soups and salads. Tom and I had the “Magic Mushrooms” which is described as “a psychedelic cermony of cremini & shitake boomers dosed with garlic & fresh rosemary in a red wine reduction tripped out with truffle oil & garlic herb toasties.” The mushrooms were so savory and rich and who can resist garlic bread that is not only delicious but gluten-free AND Vegan? 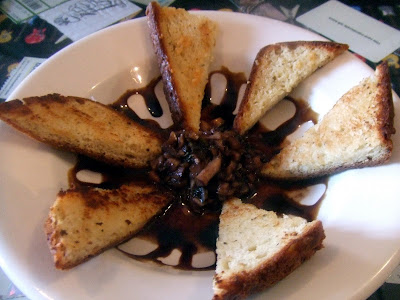 They offer a variety of salads with names like “Thai & The Family Stone” and “The Thriller” which can easily be Veganized. There are also gluten-free, personal pizzas. We had “The Ramble” which is a Vegan medley of onions, peppers, sun-dried tomatoes, fennel, artichoke and broccoli. This was heaven, especially since we’ve been missing pizza so much! There was so much flavor on that pizza, we never missed the gluten or the cheese. 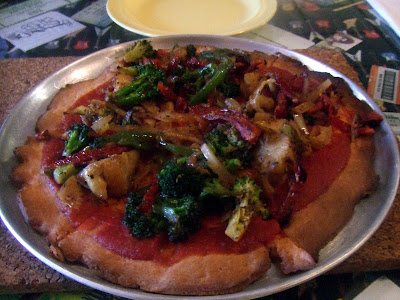 Next comes the heart of the show, the Headliners. While the menu lists the Vegan & Veggie Headliners separately, many of the main dishes can be made Vegan. Organic tofu can be added to any dish for $3. All dinners come with that delicious gluten-free, Vegan garlic herb bread and a house salad dressed with a sun dried tomato vinegarette. Gluten-free brown rice pasta is available with any pasta dish and as if that wasn’t enough, all of their cream sauces can be prepared with soy milk upon request. Now that’s a class act!

Headliners boast names like “Joplins Penne Rose,” “Stairway To Heaven,” and “Spaghetti with Grateful Red Sauce.” I mean, just listen to how the “Pasta Vibration Mon!” is described: “JAH be skank’n it easy with this Marley inspiration. Jerk Tofu, pineapple chunks in a coconut curry cream, laced with green onions & penne.” Yum! I had the “Rambin Rottini Primavera” which was fresh and flavorful. Here’s the description: “Give it up to this ensemble of onions, peppers, sun-dried tomatoes, fennel, artichoke hearts and broccoli florets, jazzed up in a garlic and veggie broth with garden rottini.”

The creativity is amazing. How about Vegan tortellini made with pineapple, banana, mango, scallions and pine nuts in a coconut alfredo? Tom loves mushrooms so he ordered “Hey Jude.” The lyrics go “Don’t Carry the World Upon Your Shoulders, our magical mushrooms are deglazed with onions & roasted garlic, in an herb’d cream sauce, lightly finished with a balsamic reduction & truffle oil over penne.” This is definitely a Grammy award winning dish! 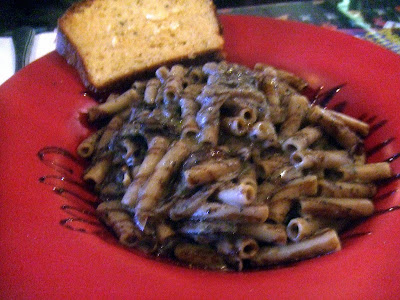 But wait, Elvis hasn’t left the building yet! There are still the Encores, delicious and indulgent desserts. Judy told me she is working hard on making the Vegan selection larger, especially their “Handcrafted Tie-Dye Cheesecake.” For now, however, there is a Vegan version of the “James Brownie” which had Tom singing “I Feel Good.” 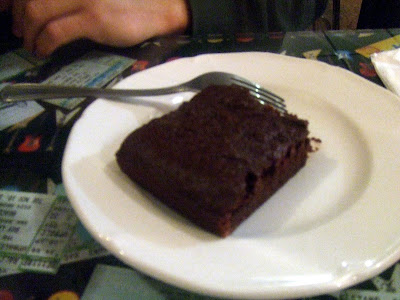 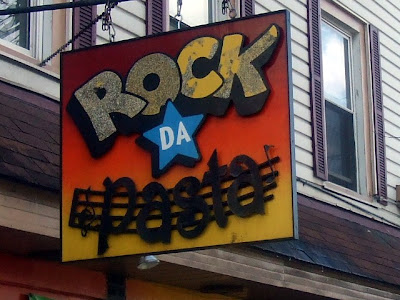