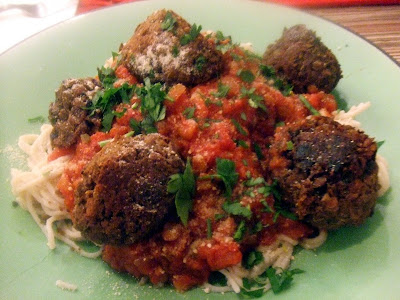 I cook something, it tastes great and I take pictures and then think, “Yeah, but what am I going to say about Indian Stew?" (that’s just to tease you because I have an INCREDIBLE Indian Stew recipe waiting to be shared).

אָבער, the lack of a story was not the only reason this recipe has been sitting in the “Green Room” waiting for its 15 minutes of fame for so long. This delay came from not being able to decide what to call it. Why the problem?

געזונט, one day a debate ensued on a Facebook group page for using the word “meat” when describing an Extreme Vegan Makeover for meatloaf or something. Or maybe I used the word “steak.” I don’t even remember. Some people don’t like to see or hear words that remind them of food made from animals. I respect that. So I came on the blog and put all the words like that in quotation marks in the titles of all my recipes.

So I did some reading on the etymology of certain words. According to The Online Etymology Dictionary, the term “פלייש” comes from the Old English word “mete” which meant food as opposed to drink. It wasn’t used to mean animal flesh until much later around the 14th century. Today we talk about the “meat” of a coconut and seitan being “wheat meat.” 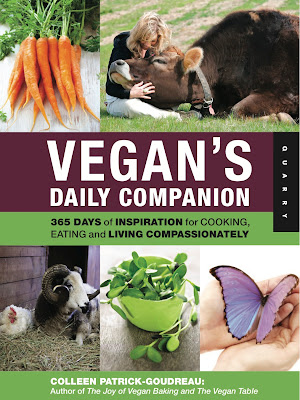 One of my favorite writers and Vegan chefs, Colleen Patrick-Goudreau writes how she steers away from words like “mock,” “faux,” “substitute,” “fake,” or “imitation” because Vegan food IS real food and not some inferior, unreal version of animal-based foods. She writes in her Vegan’s Daily Companion, “By definition, the words “אנדער ברירה” און “פאַרטרעטער” imply that the thing they are being measured against is the superior choice; וואָס איז, you choose the “פאַרטרעטער” when you can’t get the real thing, and so on” (פּ. 175). I completely agree. I don’t like when people say they eat “fake” cheese. The cheese I eat isn’t fake. It isn’t plastic or pretend cheese. It’s just non-dairy cheese.

פּלוס, if my recipes are makeovers of old pre-veg favorites, then, אַוואַדע, they have to have the original name in them somewhere or how will anyone know what it is I am trying to recreate in a compassionate, אַכזאָריעס-פֿרייַ וועג? If I call my recipe Chickpea Salad and not Chickpea “Tuna” Salad, then how will anyone know I am attempting to recreate the tuna fish salad and sandwiches that many people, including myself, loved before becoming vegetarian or Vegan? Some people may feel disgusted by the thought of eating anything that reminds them of animal foods but there are many, many people, again including myself, who miss the foods they used to eat and appreciate a way to satisfy those cravings with Vegan foods that are familiar to their senses and their memories.

אין פאַקט, someone told me that my Chickpea “Tuna” Salad was just the thing her sister needed to give up eating tuna! THAT is the purpose of my Extreme Vegan Makeovers.

Now for the recipe: I spent a lot of time batting around ideas about what to call these. Tom and I sat around free associating names like “veet” balls, “neat” balls, lentil balls, עטק. It actually got quite silly (and risqué) and I proposed holding a contest on the blog so someone else could come up with a name that everyone would be happy with. אבער אין די סוף, I have to be true to myself and so I present to you my delicious Lentil “פלייש” באַללס. 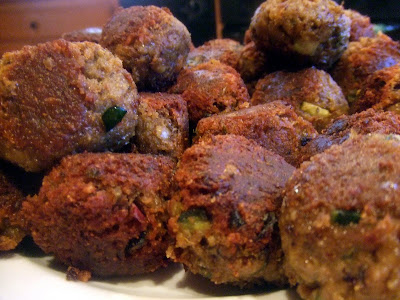 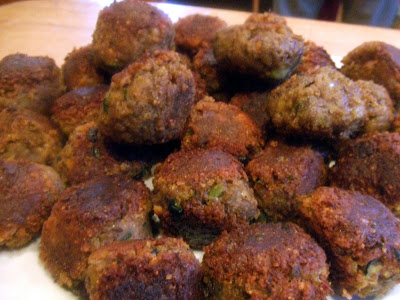 ברענגען 4 cups of water to a boil in a large saucepan. Add the lentils and a pinch of salt and return to a boil. נידעריקער די היץ, cover and cook for about 20 minutes until the water is absorbed. Let cool and move the lentils to a large mixing bowl. Mash them with a fork, potato masher or your hands until they are completely mashed.

Add the hot veggies to the lentils in the bowl. The heat will help soften the lentils. Add the parsley, bread crumbs, פלאַקסיד, וואָרסעסטערשירע סאָוס (or soy sauce and vinegar), און בשמים. In a separate little bowl or cup, put 2 Tbs. of chickpea flour. לייגן 2 Tbs. of water and mix into a loose paste. This will act as a binder. Add the flour and water mixture to the bowl.

Put the balls into the skillet and fry on medium heat for about 8 מינוט. Turn them carefully with tongs or a thin spatula so that they brown on all sides. Cook them long enough to be sure they get cooked all the way through (that’s a great excuse to steal one and taste it 🙂 Remove from the pan and serve however you choose. 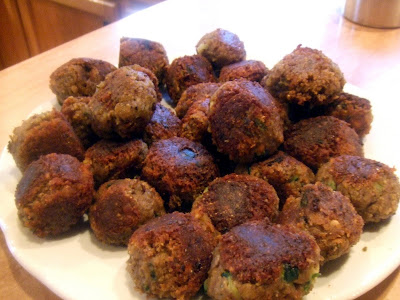 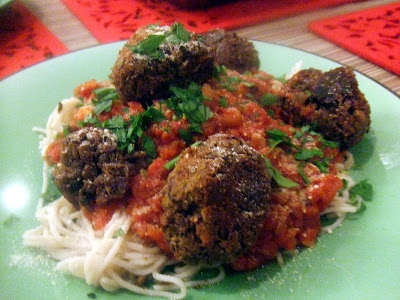 When I made the Lentil “פלייש” באַללס, I served them with brown rice pasta with a simple Marinara Sauce. But we had so many left over, that the next time we ate them, we changed it up completely and served them with mashed potatoes and gravy. Equally scrumptious! 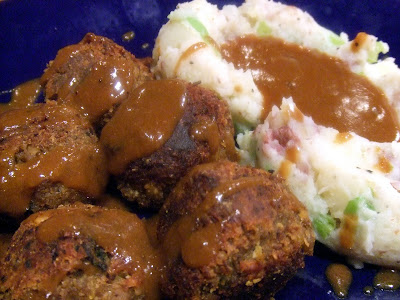