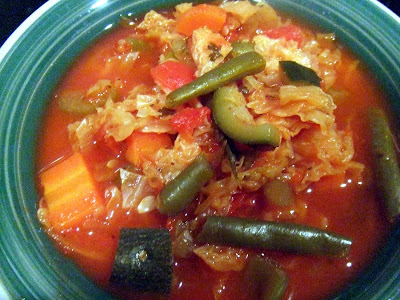 When I joined Weight Watchers (WW) in January 2001, when my weight was much closer to 300 lbs. than it was to 200 lbs. and my blood pressure was 220/110, I started making big pots of this soup. It was my saving grace. I would get home late from work and stick one of those frozen diet dinners in the microwave. Those frozen diet dinners may have only had 300 or so calories but they were packed with sodium, fat, sugar, bad carbs and preservatives. This was before I educated myself about food and nutrition so all I was concerned about was calories (or WW points). That and the fact that those dinners contained about the same amount of food I’d normally pick on while I made dinner.
﻿﻿

﻿﻿I know I was supposed to supplement those dinners with a salad or a side of veggies (sometimes I’d supplement them with another dinner) but I got home so late and I was so tired, I just didn’t want to bother. But if I had a big jar of this veggie-filled soup in the fridge, I had a quick, easy and healthy appetizer at the ready. I would fill up a mug with the soup, heat it up and eat it while my frozen dinner was “cooking” in the microwave. By the time my dinner was ready to eat, I was already full and no longer cared that it looked more like a sampler than an entree.

My first week at WW I lost 9 lbs. and I lost every single week. By my birthday in May, I had lost over 50 lbs. in just 3 and 1/2 months. My WW leader was amazed that I would earn a star (you get a star for every 5 lb. loss) almost every other week. She was upset that I wasn’t using up all my alloted points but I protested that I was so full from the soup. And it was healthy so it’s not like I was doing anything bad.

I kept that weight off for 2 years but by the time I met Tom, I was already gaining it back. And because Tom and I both loved the same bad foods, I ended up gaining it all back. Which leads to the story of My Vegan Journey and my weight loss that is now at 116 lbs. This time I know I’m not gaining it back. Not with my diet of Vegan whole foods, good fats, minimal sugar, no MSG or HFCS, no refined foods, gluten-free and NO MORE FROZEN, PROCESSED FOODS (except Van’s GF Waffles and Sunshine Burgers. I love Sunshine Burgers but still only once in a while).

I may not have known it then, but my soup is a very healthy Vegan dish. It’s filled with onions, carrots, celery, cabbage, tomatoes, green beans and zucchini. It’s easy to make, it tastes good hot or cold and it’s very filling. It’s still my go-to soup when I want to kick-start my diet or get off a plateau. This recipe is my standard combo of veggies but you can add whatever veggies make you happy. Eat this soup and you will be welcoming the warm weather and your cute summer clothes. 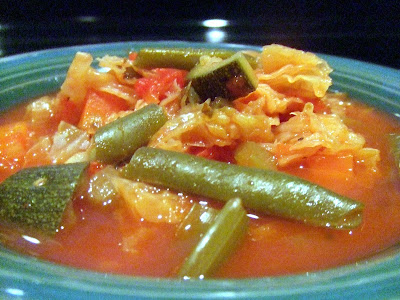 Heat the oil in a large stockpot. Add the onion and cook under medium heat until tender, about 5 minutes. Add the celery and carrots and cook about 5 minutes until the vegetables soften a bit. Add the garlic and the tomato paste to the pot. Mix everything together well and let cook for 2 minutes.

Add 6-8 cups of broth or water, depending how much soup you want to make. I usually use 8 cups and make a big stockpot of the soup. Add the tomatoes, green beans, the cabbage and the spices. (I keep this very simple with just salt, pepper and parsley but you can add whatever spices you love). Mix well. Bring the soup to a boil. Then cover the pot most of the way and let it cook on low heat for about 30-40 minutes.

When the vegetables are softened, add the zucchini and cook, uncovered, for an additional 10-15 minutes. Taste to make sure the seasoning is to your liking.

You can serve the soup right away. The flavors will intensify over time. It tastes great hot or cold. It can keep for several days to a week in the fridge and it can be frozen for later use. 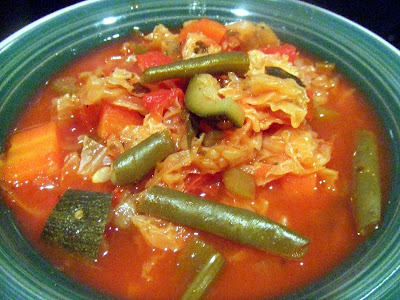