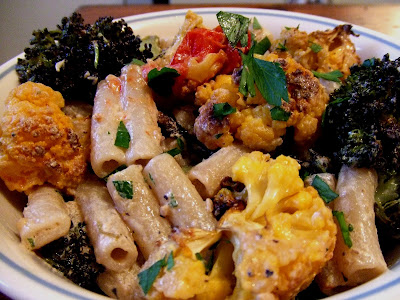 So in my last recipe, I mentioned that I bought both the purple and the orange cauliflower and how I was agonizing over what to do with them. With the purple head, I made that incredibly beautiful Purple Cauliflower Soup with Cheddar Crisps. That left me with the bright orange head of cauliflower. What to do?

All I knew was that I wanted to make a dish that was really colorful. Should I keep the cauliflower raw, should I steam it, blanch it? I went back and forth for so long I was afraid the cauliflower would go bad and I’d have no dish at all. 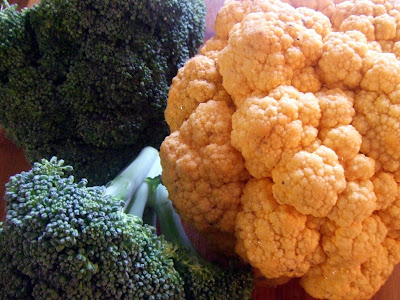 Then I had an urge for pasta so I decided I’d make a roasted cauliflower pasta dish and I’d also use some broccoli I had as well as yellow and red cherry tomatoes. But what kind of sauce? A red sauce would mask the colors of the veggies but I thought the hearty roasted vegetables and brown rice pasta needed a heavier sauce than just garlic and oil.

Throwing caution (and calories) to the wind, I decided to make a quick cream sauce using roasted garlic and what I had on hand in the refrigerator: So Delicious coconut milk creamer, Vegan butter spread and Parma raw grated parmesan. Parma Raw grated Parmesan is a mixture of walnuts and nutritional yeast and has a delightfully nutty, cheesy taste.

The result was a rich, cheezy and creamy sauce that beautifully complemented the deep, nutty flavors of the roasted vegetables and the sweetness of the roasted garlic. And yes, all the beautiful colors were there: the orange of the cauliflower, the green of the broccoli, the bright red and yellow of the cherry tomatoes. 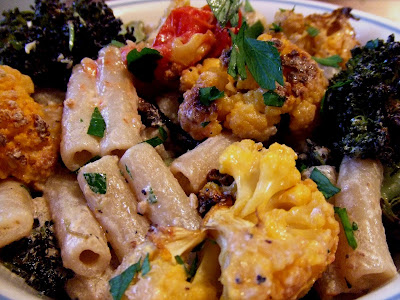 This dish felt indulgent and comforting and was another incredible way to showcase the beauty of cauliflower. 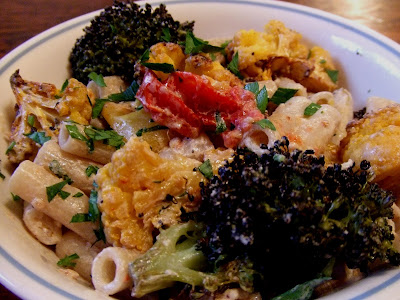 Preheat the oven to 400 degrees. Set a large pot with water to boil for the pasta.

Slice the tops off the heads of garlic. Place each head on a sheet of aluminum foil, drizzle with extra-virgin olive oil and salt and wrap them up.

Mix the cauliflower, broccoli and tomatoes in a bowl with 1 Tbs. of olive oil, salt and pepper. Place the veggies on a lined baking sheet along with the wrapped up garlic. Bake for about 40 minutes, turning the veggies half-way through. They should be browned and crispy at the edges. Unwrap the roasted garlic and let cool a bit. 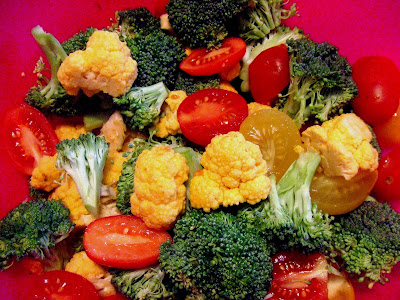 When the veggies are just about done and the water is boiling rapidly, add a handful of salt to the water, and then add the pasta. Cook until the pasta is just shy of al dente (it will cook more in the sauce), drain.

In a large skillet or saucepan, heat 4 Tbs. of extra-virgin olive oil. Squeeze out the roasted garlic from the skins and add it to the oil. Stir well. Add the Parma to the oil and stir well. The sauce should now look a bit thicker and darker.

Add the vegan butter to the sauce and let it melt. Then add the coconut milk creamer, salt and pepper. Keep stirring until the sauce thickens a bit.

Add the penne to the sauce and stir to coat the pasta. Add in the roasted veggies and half the parsley and mix well.

Serve with fresh parsley for garnish and extra grated Parma, if desired. 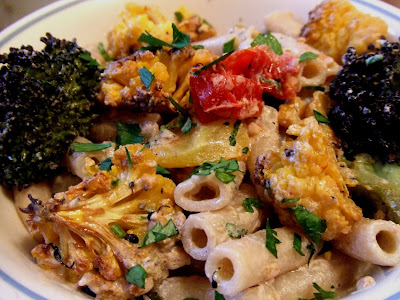