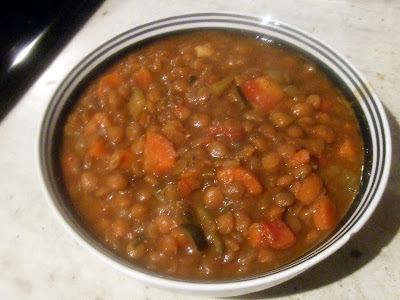 The “V” Word continues to celebrate VeganMoFo, the month of delicious Vegan food, with the other 25 letters of the alphabet. “L” is for Lentil Veggie Soup.

When I was a kid, my mother would make lentil soup and I would refuse to eat it. It was brown and I thought soup should not be brown. She also made a veggie loaf with lentils. I wouldn’t eat that either. Just what was a lentil anyway?

When I was a teenager and volunteering at the hospital, they made a lentil soup and it was red! I liked it. Mom wasn’t very happy that I liked the hospital’s lentil soup but still wouldn’t eat hers.

Today I adore lentils – I use them in meatballs, burgers…and soup. Lentil soup is one of my absolute favorites. If only I could go back in time…I would give anything for a bowl of my Mom’s lentil soup now. 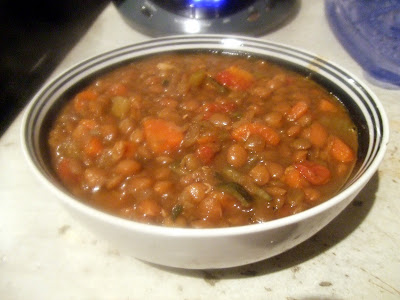 In a large pot, spray with cooking oil. Add the onion, carrot, celery, zucchini and garlic and sauté for 3-5 minutes until the veggies are tender. Add the lentils, broth, tomatoes and spices except for the salt.

Bring the soup to a boil, then reduce heat to a simmer. Cover and cook about 45 minutes until the lentils are softened. Adjust the seasoning and add salt to your taste.

“L” is for Lentil Soup. For other “L” words, check out my Latkes, my Lo Mein, my Lentil Meatballs, and my Lentil Burgers.

VeganMoFo: "K" is for Kale, Apple and Parsnip Stuffed Squash
VeganMoFo: "M" is for Moo Shu Vegetables with 5-Spice Pancakes

2 Responses to VeganMoFo: "L" is for Lentil Veggie Soup