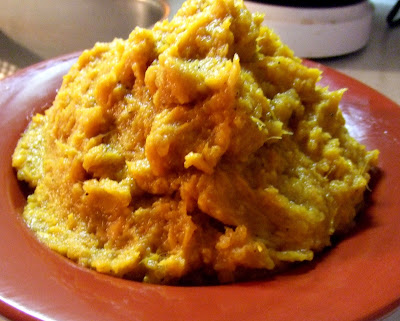 The “V” Word continues its celebration of VeganMoFo, a month of Vegan food, with the other 25 letters of the alphabet. “Y” is for Yam Banana Mash and Yam Cakes. 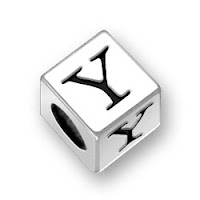 Ok, let’s get this straight. Is it yams or is it sweet potatoes? Many people seem to use these terms interchangeably but they are really two different vegetables. And neither of them are potatoes, they are tubers!

Sweet potatoes (Ipomoea batatas) are yellow or orange elongated tubers with tapered ends. The paler-skinned sweet potato has a thin skin with pale yellow flesh. Despite its name, it is not sweet and its texture is similar to a white baking potato. The darker-skinned sweet potato (the one that is often mistakenly called a yam) has a thicker skin and bright orange flesh that is moist and sweet. 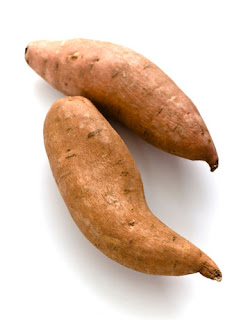 Yams are tubers of a tropical vine called Dioscorea batatas and are not even related to the sweet potato. Depending on the variety, yams have brown or black skin with off-white, purple or red flesh. They are more easily found in international than American markets. Yams are actually sweeter than sweet potatoes as they have more natural sugar. However, sweet potatoes are more nutritious and are loaded with calcium, potassium, and vitamins A and C. 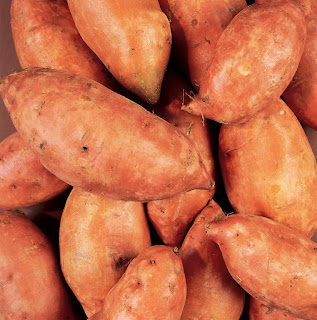 So if yams and sweet potatoes are totally different, why are they so often confused? My research revealed that in the U.S., firm varieties of sweet potatoes were produced before soft varieties. When the soft ones were grown, people needed a way to differentiate between the two types. African slaves in the South had already been calling the soft sweet potatoes ‘yams’ because they resembled the yams in Africa. The word ‘yam’ comes from the Senegalese word ‘nyami,’ which means “to eat,” and was first recorded in America in 1676. So the word ‘nyami’ was shortened to ‘yam’ and used for the soft sweet potatoes to distinguish them from the firm ones.

Today the U.S. Department of Agriculture requires labels with the term ‘yam’ to be accompanied by the term ‘sweet potato’ so you will know what you are really buying. Unless you specifically search for yams, which are usually found in an international market, you are probably eating sweet potatoes!

I’m not going to lie. The “yams” I used in this recipe are probably really sweet potatoes but the store did call them yams so I say it counts! My yummy Yam Banana Mash doesn’t have a lot of ingredients but it packs a ton of flavor. The sweetness of the tubers made even sweeter with banana and maple syrup and brightened up with orange zest and juice. They are creamy, delicious and a beautiful jewel tone. Another must for your holiday dinner!

And if you end up with leftovers, don’t despair. Simply add some flour and in just a few minutes, you will have Yam Cakes that are crispy on the outside and smooth and creamy on the inside. Whether you call them yams or sweet potatoes, I call them delicious! 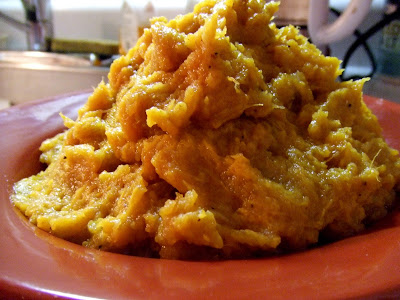 Put the yam cubes into a large pot, cover with cold water. Cover the pot and bring to a boil. Let cook until the yams are fork-tender, about 15-20 minutes. Drain the yams and set aside.

In the same pot add the banana, the butter and the orange juice. Cook for about 2 minutes. Add the yams back into the pot. Add the maple syrup, nutmeg, salt, pepper and orange zest. Mix it all together, mashing the yams.

For the Yam Cakes: 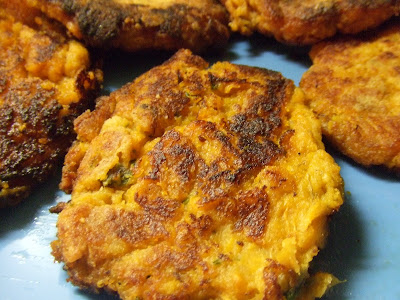 Take refrigerated leftover mashed yams. Add about ½ cup of flour to absorb the moisture (you may need more or less). Form into patties and fry until golden brown. Enjoy!

“Y” is for Yam Banana Mash and Yam Cakes.

3 Responses to VeganMoFo: "Y" is for Yam Banana Mash and Yam Cakes