By Rhea on December 27, 2011 in Appetizers, Snacks & Starters, Recipes 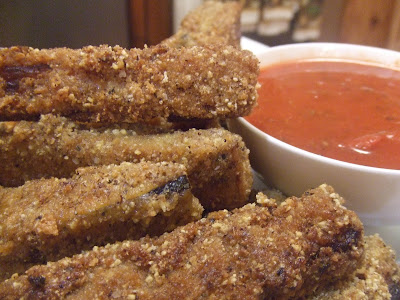 Christmas may be over but the holiday season is still in full swing. Today is Boxing Day, the first day of Kwanzaa and the 6th day (7th night) of Chanukah. Friends and family are still getting together for celebrations and that means more delicious party foods are still needed.

Here’s a great twist on finger foods: eggplant fries. Delicious, healthy eggplant made even more delicious and a bit less healthy by breading and frying it into yummy fries.

I used chickpea flour (my favorite flour) mixed with a little cornstarch to ensure a crunchy layer protecting the eggplant. Ground flaxseed mixed with water works as a binder for the breading. Any bread crumbs will do. I used gluten-free bread crumbs but if you’re not worried about gluten, go for panko. Spices are added in both layers for lots of flavor.

Eggplant really soaks up oil so I try to use as little as necessary. You could deep-fry these but on the other extreme, you could also bake them. I like the middle road of pan-frying. I make a very fast marinara sauce by cooking up some crushed tomatoes with garlic powder, salt, dried basil, dried oregano, black pepper and a pinch of red chile flakes. It’s done in 15 minutes!

My Eggplant Fries are addictive! Creamy, decadent eggplant surrounded by an Italian-flavored crunchy coating. When dipped into marinara sauce, you swear you’re eating eggplant parmigiana. If you’re having company, double the recipe because these will not last long!! 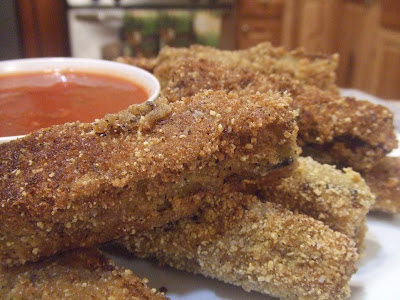 Directions
Cut the eggplant into large fries. The easiest way to do this is to cut the ends off the eggplant, peel it, then stand it up. Slice the eggplant length-wise into 1/2″ pieces. Then lay each piece down and cut it into 1/2″ strips. If you want your fries long, leave them like this. If you want them shorter, cut those strips in half.

Mix the flour, cornstarch, and spices in a shallow dish. Mix the flaxseed and water into a loose paste. Add it to the milk in a second shallow bowl. Add the bread crumbs, nutritional yeast (or grated parm), salt and pepper to the third shallow bowl.

Heat about 2 inches of oil in a pan or skillet. Toss eggplant in the flour mixture, then dip in the milk/flax mixture, then into the bread crumbs.

Fry the eggplant until golden brown, about 2-3 minutes on each side. Transfer to a towel-paper lined plate. Serve with marinara sauce. Enjoy! 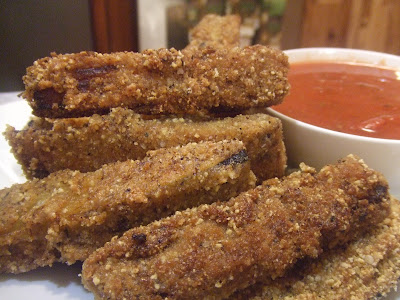