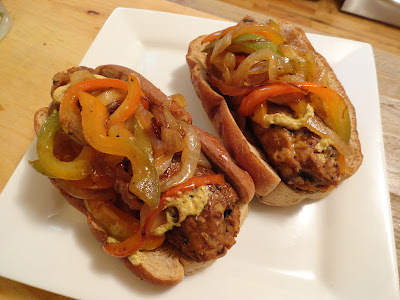 Last summer I conducted multiple trials to come up with a gluten-free sausage that would not only taste great but would hold up on the grill. After many attempts, I came up with a recipe that I thought passed the test.

But I knew I still wanted to play around and improve upon it. I needed a recipe that would let me say “Keep your gluten-filled Field Roast and Tofurky sausage. Mine is just as good and won’t lead to inflammation or tummy troubles.” Not to mention (though I guess I’m mentioning it) mine are not processed and way less expensive. So HA!

Improving the recipe didn’t take much. I just switched out the pinto beans for black-eyed peas and amped up the spice mix a bit. A few more mushrooms and a bit more Worcestershire sauce (vegan and gluten-free, of course). If you don’t have gluten-free Worcestershire sauce, you can substitute equal amounts of gluten-free tamari and balsamic vinegar. The result was my best work yet! 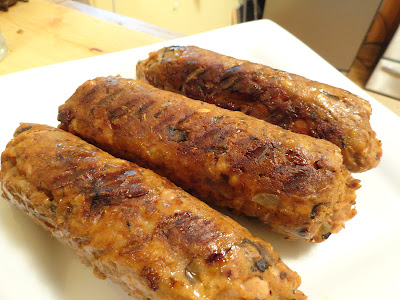 These sausages are firm enough to hold up on the grill. When you cook them, they are crispy on the outside, tender on the inside but not mushy, and filled with spicy, Italian flavor. Using black-eyed peas instead of pintos removed the “beany” taste and provided a neutral background for the spices to shine through.

The same recipe can be used with different spice mixes to make breakfast sausages, chorizo sausages or apple sage sausages. They can be sliced up to use in other recipes or eaten whole on a hero with sauteed peppers and onions. You can shape them into links or patties. 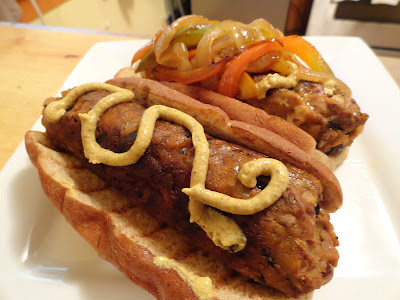 However you decide to make them, make several batches because you are going to love them and eat them all. Say goodbye to gluten and hello to greatness! Enjoy! 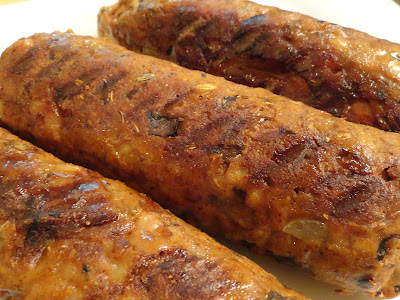 For the Sausage:
2 tsp. + 2 tsp. olive oil
1 cup mushrooms, chopped
¼ cup onion, finely chopped
1 garlic clove, minced
2 cups cooked or 1-15 oz. can of black-eyed peas, drained and rinsed
1 Tbs. sun-dried tomato paste
¼ cup nutritional yeast
½ cup brown rice flour
1 tsp. xanthan gum
3 Tbs. of gluten-free, vegan Worcestershire Sauce
A few drops of Liquid Smoke (optional)
Prepare spice mix in advance. Set aside.
Heat a skillet with 2 tsp. of olive oil. Sauté the onions, mushrooms and garlic until softened. Set aside and let cool.
In a large bowl, add the black-eyed peas and mash them up. You can use a fork, a potato masher or just get your hands in there. If you want to use a food processor, do a rough chop. You don’t want a puree. Then add the tomato paste, nutritional yeast, spice mix and brown rice flour. Mix well.
Sprinkle the xanthan gum over the mixture and incorporate it well.
Add the cooled veggie mixture to the bowl and mix it into the dry ingredients. Add the Worcestershire sauce to the bowl and mix it all up well. If you are using the Liquid Smoke, add it in now too, along with the remaining 2 tsp. of oil.

Divide the mixture into 4 parts. Shape each part into a log. Wrap the logs individually in foil and steam them for 15-20 minutes. I use a metal steamer that sits atop a large stockpot of boiling water. Let them cool. Then refrigerate for a few hours or overnight, if possible. This will help them firm up even more.

When ready to use, unwrap and cook them however you desire. We cooked them on a grill pan and topped them with mustard and sautéed bell peppers and onions. Yum! 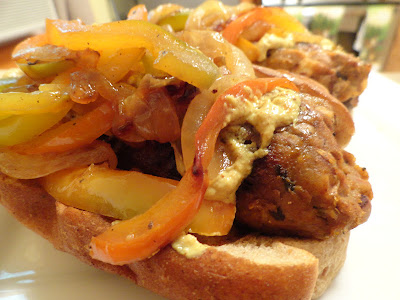