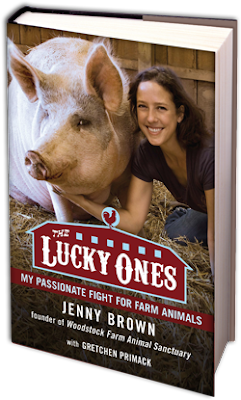 "Do sukcesu, jak szczęście nie może być prowadzona; musi nastąpić, and it only does so as the unintended side-effect of one’s dedication to a cause greater than oneself.” – Viktor Frankl, Man’s Search for Meaning
In bookstores, "The Lucky Ones: Moja pasją Walka o Farm Animals,"Jenny Brown z Gretchen Primack, will take its place on the shelves next to other books about animal abuse, animal rights, veganism and other social causes. But “The Lucky Ones” is more than that. Tak, all these important issues are covered in depth but to me, this book is a story about love, courage and finding one’s identity and meaning in life. It is about finding the gift in one’s loss and turning tragedy into triumph. “The Lucky Ones” is not just a story about rescued animals. It is a moving tale of how one young girl not only courageously faced her pain but used it as a catalyst to become a woman who would change the world for the better.
When Jenny Brown, an active athletic child, lost her leg to cancer at the early age of ten years old, her carefree days of childhood were replaced with pain, illness, chemotherapy treatments, and physical deformity. Rather than hide from the world, Jenny strove for normalcy with courage, the support of her family and especially, humor. One moment you are crying as you read about the tremendous fear and pain Jenny suffers. The next you find yourself laughing as she makes fun of herself and her once-humiliating experiences. From the beginning you know this is no ordinary woman.

While building her education in film-making, her passion for animal rights also continued to build. In Chicago, Jenny made her first film, met her first vegan and attended her first protest. She then went on her first undercover assignment filming the horses on a Premarin farm in North Dakota. Reading about that horrifying experience, I felt as if I were there with her, needing to steady the book in my hands as much as Jenny needed to steady the camera in hers.
Back in Louisville and then Boston, Jenny continued advancing in her film career but her passion for animal rights kept calling to her. She learned about Farm Sanctuary and eventually attended a conference there. When Jenny came face to face with the animals, her destiny became clear as she “felt in touch with something noble, something righteous.” Jenny did more undercover operations, including one at a Texas “livestock” auction. Her detailing of what she saw, of the suffering, is palpable and heartbreaking. I cried throughout that chapter, marveling at how much courage Jenny possessed, how she endured the pain of bearing witness in order to bring about change.
Following her heart, Jenny was determined to learn first-hand how to care for animals, become an effective advocate and open a sanctuary of her own. She lived at Farm Sanctuary for a year, next door to 300 rescued “layer” hens, while she was trained in the grueling work involved in caring for farm animals. Jenny learned about more horrors than most people can imagine but she also learned about the other side of suffering: about resilience, healing, trust, love and survival. Co najważniejsze, she learned she could make a difference.
W 2004, Jenny Brown realized her dream and with her husband, Doug Abel, opened Woodstock Farm Animal Sanctuary (WFAS). Through more hard work and determination, fundraisers and friends, Jenny and Doug transformed the almost barren, multi-acre property in Willow, NY into what is today, one of the most well-known sanctuaries for rescued animals in the country. It was there that Jenny and Doug got married. It is there that animals who once knew pain, cierpienie, fear and loss, now know healing, safety, love and trust. It is where thousands of people visit and not only learn the truth about animals but find something in their hearts they didn’t even realize was missing. Woodstock Farm Animal Sanctuary is love, it is hope, it is home. Viktor Frankl wrote, “The greatest task for any person is to find meaning in his or her life…in work (doing something significant), in love (caring for another) and in courage during difficult times. Suffering in and of itself is meaningless; we give our suffering meaning by the way in which we respond to it.” Jenny Brown has certainly found meaning in all 3 aspects: her amazing work, her boundless love and her infinite courage. She has given suffering meaning, her own and that of the animals, by responding with her whole heart and soul. In this passionate, heartfelt, humorous and inspiring story, “The Lucky Ones” lets us share that journey to find meaning in life, all life.
"The Lucky Ones: My Passionate Fight for Farm Animals” will be available for purchase at the Woodstock Farm Animal Sanctuary store and all booksellers on August 2nd.