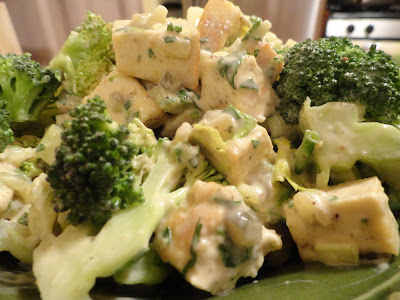 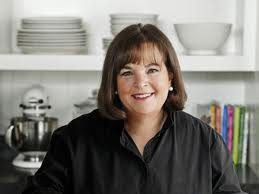 Particularly irritating is Ina’s constant reminders to viewers to use “good” מאַסלינע ייל, “good” wine, “good” herbs, “good” וואַניל, עטק. Don’t buy the cheap stuff. If you aren’t going to buy the most expensive ingredients, why bother cooking at all? Her recipes are even written up that way!!! 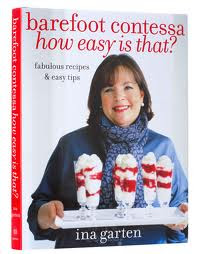 צו זייַן שיין, I sometimes watch The Barefoot Contessa because she has some good recipes and Ina Garten explains how to make them in a style that is easy to understand and follow. Tom and I particularly like the episodes that involve her husband Jeffrey who comes home for the weekends and his traditional Friday night chicken dinner. How special is that? 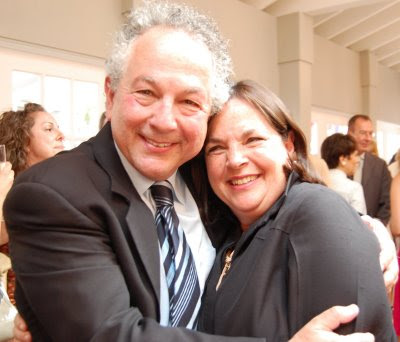 Then tired of that work, Ina went back to cooking and began flipping houses, earning her the money she needed to buy a specialy foods shop in the Hamptons, named The Barefoot Contessa. Ina kept the name of the store even though she had never seen the movie the store was named after. The store was a huge success, expanding for decades, until once again, Ina felt the need for a change and sold the business. She studied the stock market, created an online business and then began publishing cookbooks which were very popular because of their pictures and coffee-table book format. אין 2002, she was approached by Food Network to have her own show. How special is that? 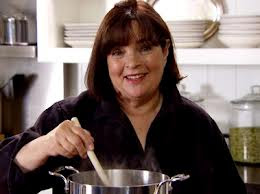 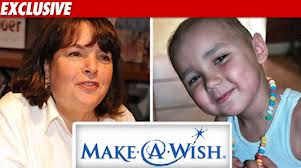 נאָך, if you want to watch a cooking show that will teach you how to make classic foods in a simple yet elegant way, The Barefoot Contessa might be the show for you. My oppositional nature led me to veganize one of Ina’s simplest, most down-to-earth recipes: chicken salad. And not fancy curried chicken salad or Chinese chicken salad. Just plain old chicken salad. פּלוס, whenever I go to the natural foods store that has a deli counter, I always want their “unchicken” salad so I figured I should have my own recipe. How smart is that? 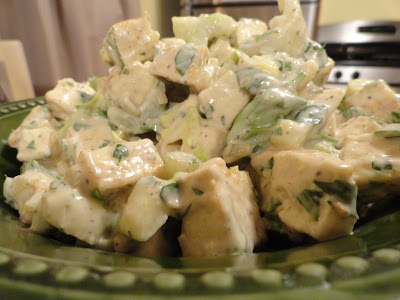 My Tofu “הינדל” and Broccoli Salad is delicious. You can make it with or without the broccoli; I just like adding extra veggies to everything. It would be delicious on a sandwich – my favorite way to have it is with lettuce, פּאָמידאָר, and tempeh bacon on toasted bread – or as I had it here, atop a simple salad. Ina’s recipe calls for “good” olive oil and “good mayonnaise” but mine calls for “better” ingredients because mine are cruelty-free, healthier and vegan. What could be more perfect than that? האַנאָע האָבן!
Tofu “Chicken” and Broccoli Salad 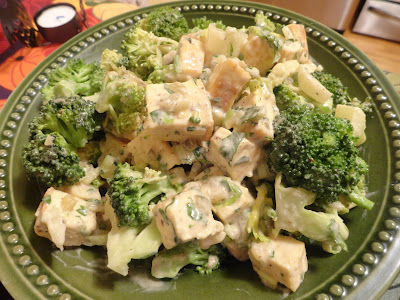 First we have some steaming to do. Bring a large pot of water to a boil with a steamer basket on top of it. When the water is at a rolling boil, steam the block of tofu for 3 מינוט. Remove the tofu from the steamer basket and let it cool down so you can handle it. אין די דערווייל, steam the broccoli florets, if you are using them. Let them steam for about 4 מינוט, drain them into a colander and let the cold water run over them to stop the cooking process. (Alternately, you can use an ice bath). Set the broccoli aside until ready to use. How easy was that?

Heat a large skillet over medium heat and add the oil. Cut the block of tofu into very small cubes. Add them to the skillet, flipping them often. You want them to cook just a bit so they get firmer but only slightly browned. We want to keep the white color. ווען זיי זענען געטאן, transfer the tofu cubes into a large bowl. How good does that tofu look?

Add the celery, פּעטרעשקע, מייַאָ, Dijon and relish to the bowl. Add the spices and mix well until all the tofu is covered and the spices are well-distributed. If you are using the broccoli, add the florets to the bowl and mix them in too. ריפרידזשערייט ביז גרייט צו דינען. Serve in sandwiches or atop salads. How perfect is that? 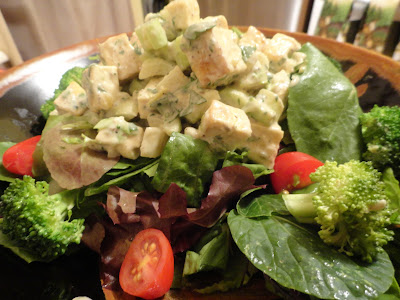