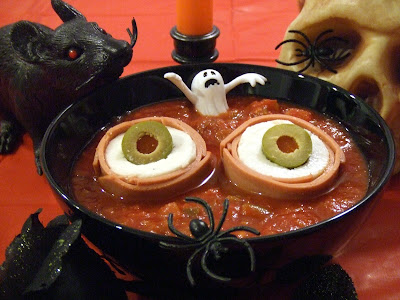 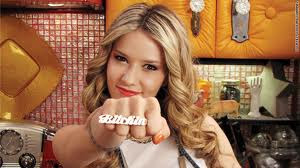 Como muchos de ustedes saben, Nadia T. y Bitchin’ Kitchen hold a special place in my heart. Not only do I love the show but Nadia and the rest of the BK Crew are great people – really nice and so much fun!

I was also honored last year to be one of 5 winners nation-wide and have my recipe for Tofu Piccata published in Nadia G.’s 2nd cookbook, Cookin’ Para Trouble. 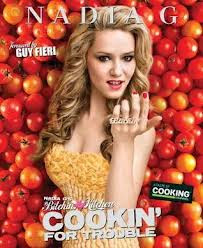 I keep the cookbook open to MY recipe on my kitchen island to inspire me to work on my own cookbook (Sé, SÉ!)

Last year I also veganized some of Nadia’s Halloween dishes and I posted the pictures on Facebook but never blogged the recipes. Given my VeganMoFo theme and the fact that Halloween is less than 2 semanas, it seemed a good time to do that now.

You should also check out Nadia G.’s Bitchin’ Halloween Bash that is airing on The Cooking Channel. There are lots of great recipes for your Halloween party and if they aren’t already vegan (because Nadia does make a lot of vegan dishes), they may be vegetarian and/or easy to veganize. 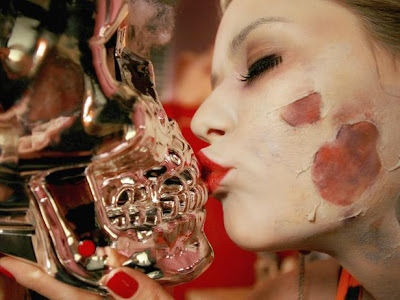 Aquí están 3 Halloween recipes that I made last year. They are all vegan but please note that 2 of them are NO sin gluten. These treats are really fun and easy to make. Trick or Treat! 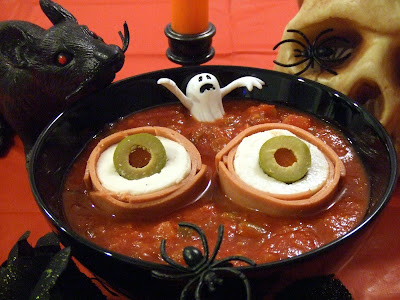 Nota: this recipe contains gluten because of the deli slices

Your favorite jarred salsa (or make your own)

Slice the olives into disks about ¼ inch each. With a cookie cutter, cut rounds out of the vegan cheese blocks. Place an olive dish in the center of each cheese round and with a paring knife, trace around it.

Cut out a chunk of the cheese from the outline so that the olive can fit inside.

Fill bowls with the salsa and carefully place your eyeballs…well, 2 of the eyeballs you made…into each bowl. Alternativamente, you can fill a large bowl with salsa and lots of eyeballs to stare at your guests. Lookin’ bueno, eh? 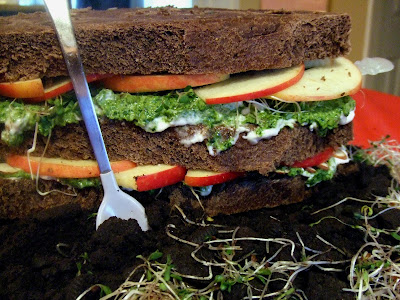 Cut the pumpernickel slices into coffin shapes. En una rebanada de pan, spread some mayo and some pesto. Sprinkle a few toasted almond slivers on top of the pesto. Add a few Alfalfa sprouts and a layer of sliced apples.

Place a second coffin-shaped bread slice on top and repeat the process for another layer. Top it off with a third slice of bread. Repeat to make a second sandwich. Each sandwich is big enough to feed to 2 people but if you want one per person, el doble de la receta. I also added a small plastic skeleton in my sandwich because an empty coffin isn’t any fun.

To make the grass and the “dirt” for the coffin, add a layer of Alfalfa sprouts onto a platter. Crumble the chocolate cookies and place them on a platter. Arrange the coffin sandwiches on top of the “dirt.” Stick a small spoon in the dirt to act as a shovel. Your guests will really dig this dish! 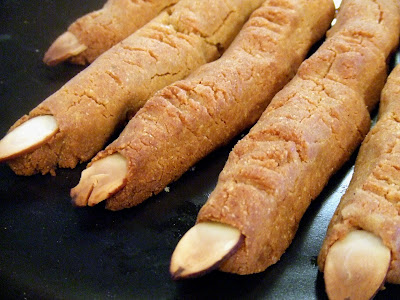 Nota: this recipe is gluten-free.

Sprinkle some extra flour on a smooth surface. Remove the mixture from the food processor and shape into a tube. Break the tube into pieces about 2 inches each. Roll each piece into a thin tube. Pinch the tube slightly in the middle to make it look like a finger. Look at your own fingers for a guide but pretend you are a hundred years old.

Using a toothpick or a fork tine, draw on knuckle lines. On the end of each tube, add the almond, pointy side up so that it looks like a finger nail. Arrange the fingers on a baking sheet, sprinkle with salt and pepper and bake for 20 minutes or until they start to turn golden brown. Retirar del horno y dejar enfriar. Be careful when you’re eating these – keep track of whose fingers you’re chewing on.

Serve these creepy noms at your Halloween party and have a scary good time. Beware….uh, Quiero decir, Disfrutar! 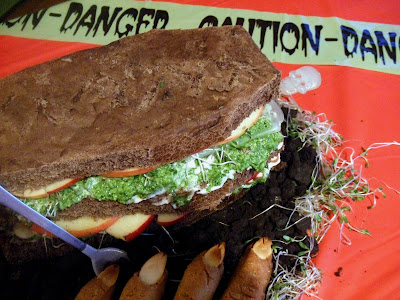