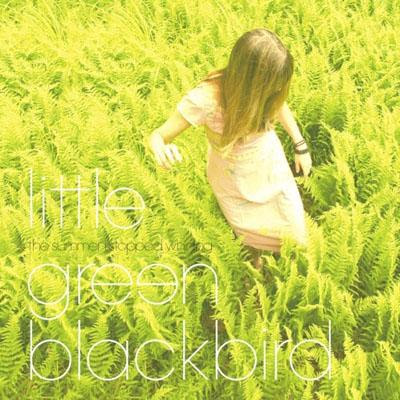 אם אי פעם בדקו את כל החומר בצד ימין של דף הבלוג, יש לך לראות תמונות של וקישורים למקומות, ארגונים ודברים אחרים שחשובים לי, שאני אוהב ושאני חושב שהקוראים שלי עשויים ליהנות. One of those is the album “The Summer I Stopped Whining” by Little Green Blackbird.
This is one of my favorite albums. I play it almost every day. The songs are soothing, כיף, thoughtful, and uplifting. Some of the songs are about animals and led me to learn a lot I didn’t know, especially about chimpanzees. Little Green Blackbird is the band name for writer and vocalist Kirsti Gholson. Kirsti’s voice is ethereal and has a calming effect similar to wind chimes or Buddhist mediatation bells. 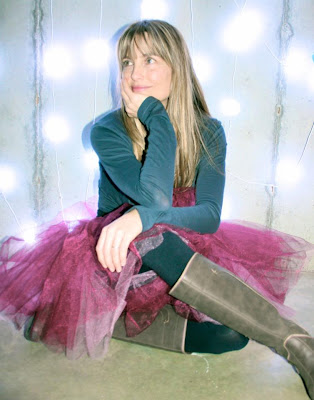 Luckily for me, Kirsti lives in Woodstock, NY and I am honored to be able to call her a friend. Kirsti and her husband, Chris Kerr, are not only a beautiful couple, מבפנים ומבחוץ, but they are strong vegan and humanitarian advocates. Proceeds from the album go to support various charities.

I wanted to show my support for the album and let everyone know about it. Who could be better than the singer/songwriter herself to talk about “The Summer I Stopped Whining?” Kirsti was nice enough to take the time to answer my questions:

TVW: Let’s start with the basics like how you began singing and why the change from your name to Little Green Blackbird?

KG: Before my brief stint as “Kirsti Gholson,” I had used band names. I prefer a band name to a personal name because it makes me feel more free to say what I want. It’s like when you wear a costume or mask, it’s still you under there but you don’t feel people’s (imaginary or real) expectations! The “little green blackbird” is a character from a book of poetry by Kenneth Patchenנקרא “Because It Is.” The poems are whimsical, quirky, happy and sad. ובכן, not really happy or sad but “happysad.” I think that’s what my music is.

אני started out as (and sometimes still am) a back-up singer and I’ve always loved being part of an ensemble. I’m in a small choir here in Woodstock (Baird Heresy and Prana) which feeds my ensemble cravings but I still miss the old days of having a band – except for the part where you split $30 among 4 אנשים.

There are solo geniuses out there for sure but a lot of the time, other musicians are contributing enormously to a particular artist’s music. Even if I write the songs and have very specific ideas about certain instrumental lines, I’m not a bass player or drummer, וכו '! – which makes me want to stop and give a shout-out to Manuel Quintana who played most of the drum and percussion tracks and Kyle Esposito who played most of the bass and guitar. All the musicians on the album are wonderful and have my eternal gratitude but those two were in it for the long haul and were so generous with their talent.
TVW:You wrote that the book “Next of Kin” inspired the songs “For Ally” ו - “ד"ר. Lemmon.” What does this book and its content mean to you?

KG: I think “Next of Kin” is a must-read. I wish every key member of Congress would read it since the Great Ape Protection Actis still being debated. “Next of Kin” was published 15 years ago and should have inspired faster, massive change in how we think about primates and all animals in research. We humans have a mind-boggling capacity to go numb or look away when a harsh reality is presented. But the fact that the Great Ape Protection Act even exists and has significant support shows that there is change. The United States and Gabon are the only countries left in the world that imprison chimpanzees for invasive research.

TVW:How did you become aware of and interested by this chimp (and others?) and their use? Is it just about the chimps used for language studies or for all chimps/animals used for research? What are your thoughts about that?

KG: As an ethical vegan, I’m against all animal testing. I read “Next of Kin” to learn more about language research and research in general. I became riveted by the stories and Roger Fouts’ personal transformation as he became friends with Washoe, the first chimpanzee to learn sign language. Learning about all these chimps who were raised as human children and taught sign language was fascinating and heartbreaking. Roger Fouts, the research assistant turned rescuer/author, was able to save only a few of the sign language chimps.

Ally, a particularly joyful and sweet child, was sold into research by the notorious Dr. William Lemmon. I spent a long time searching for any information about Ally. There were a lot of tears. I’ve still never found anything saying he was finally released to a sanctuary. If anyone knows, please tell me! Writing a song for Ally and so many others like him was the only way I could deal with how devastated I felt about him being lost to that evil world. It’s unbearable to think about these emotional beings locked up and terrified for decades. All animal cruelty is unbearable but there’s an extra nightmarish aspect for animals who are cramped in cages and tortured in one form or other year after year after year, like moon bears or gestation sows or those in research…The list goes on and on.

And speaking of evil, writing “Dr. Lemmon” was very cathartic! I knew there had to be a song titled “ד"ר. Lemmon” and then a couple of years later I wrote it. I didn’t make anything up in the song. He actually made the chimps kiss his ring and they would shake in fear when they saw him because of his cruelty. Now I hope I haven’t scared people into not reading the book. It really is inspiring.
TVW: You mention a bunch of books in your gratitudes: “Because It Is,” “White Bone,” וכו '. How did these books/poems inspire you in regards to your music?

KG: “White Bone” is a fascinating novel from the point of view of elephants and the article, “An Elephant Crack-up?” is extraordinary – another must-read! Both contributed to the inspiration for “שמח & free.” I ended the song with a continuous “lokah samastah sukhino bhavantu” (may all beings everywhere be happy and free) to send that prayer/chant out into the universe.

KG: They are love songs but only “Before You Go” is for a human – the amazing Chris Kerr (drum roll and cymbal crash!) has turned out to be quite the muse for me, inspiring “The Ice is Melting”, “Before You Go” ו - “Awaken! Take Heed.”

“Sing Hallelujah” could just as easily be for a human child. I hesitate to reveal that certain heartfelt songs are for a cat because I don’t want them to be dismissed or seen as silly. למרבה המזל, many of us know that the love for a non-human being can be just as (או יותר) pure and powerful as the love for a person. The whole point of unconditional love is that it’s – אה – unconditional so I hope that those songs resonate regardless of species.
TVW: “One in a Thousand” reads angry to me. Is that about animals/veganism? I realize every listener can interpret the lyrics in their own way. It might be just me hearing “how far did I fall for a drop of honey on my tongue” as being about using animals. Was that your intent or if not, what is that song about?

KG: זה כבר. ובכן, that one actually isn’t about animal rights but now I can see how it might sound like one. All those eating references! It’s a song I wrote many years ago after watching an old movie, “Anne of a Thousand Days” about Henry VIII and Anne Boleyn (starring Geneviève Bujold and Richard Burton). An often-upsetting relationship I was in had recently ended and strangely enough I found the character of Anne to be the perfect emotional outlet. I was taken by the scene where she talks about how there was really only one day out of a thousand when they loved each other equally…when one didn’t hate the other. It’s delicious when a novel or film inspires a different voice like that.

TVW: בתוך “The Ice is Melting” I hear some anger again. Your line, “In the town, the birds stare through cage wire at the open space where people pass by” – was it inspired by something specific?

KG: כן, the image came from a pet store that opened in Woodstock a couple of years after we moved here. The store owner would stick a cage out on the sidewalk during the busy weekends – at least that’s how I remember it. There were complaints about Woodstock having a store selling live beings but no law was being broken so there those poor birds were. Thankfully the store didn’t last long.

“The Ice is Melting” is basically about doing what you can even if it seems like a losing battle. Any gesture of kindness or justice always, always makes a difference. I wrote it as a birthday present for Chris when I was feeling particularly grateful for his big, courageous heart.

TVW: ברור, I don’t expect you to interpret every song for me but is there a specific message you are trying to get out with this album? If there is anything you hope listeners would get from your songs, what would it be? Are animal rights activists/animal lovers a specific targeted audience?

KG: I didn’t target activists or animal lovers, although there are a number of animal rights themed songs (“happy & חופשי,” “The Ice is Melting,” “Dr. Lemmon,” “for Ally”) as well as songs with an animal rights shout-out here and there. As for an overall theme, I’ll go back to “happysad.” Inspiration is everywhere and I try to write in such a way that is intimate but also universal. “What if I…” is the most personal song on the album but I think most anyone can relate to the kind of regret that stops your breath. And the love songs can be universal – although it’s fine if anyone wants to think about Chris while those tunes are playing 🙂

Multiple life-altering things happened during the making of the album and one day the title “The Summer I Stopped Whining” popped into my head. There are profound gifts that come out of monumental events like Death. Like how your life is knocked into perspective, how unlimited your compassion feels, how you don’t have any desire for what’s shallow or petty, how present your courage is. That raw intensity doesn’t last (or we’d all be saints) but hopefully we can remind ourselves every so often…To stop whining, to embrace the beauty that exists in both joy and sorrow, to be generous and kind, to be grateful if we have the luxury to think about more than where our next meal is coming from, to have the courage to fight against cruelty and bigotry in all forms, to really savor those sweet, simple and sparkly things in life…


TVW: Those are such beautiful sentiments. How wonderful it we could all live this way, even if just once in awhile. And I think “happysad” is my new favorite word! Thank you so much Kirsti.


Little Green Blackbird’s “בקיץ שהפסקתי קיטורים” is a magical album and would make a wonderful gift for anyone on your holiday shopping list including yourself. לזכור, proceeds from album sales go to various charities and it also feels good to support our vegan artists.

The album is available on the following sites:

Little Green Blackbird’s אתר אינטרנט is under construction but you can also check out the דף פייסבוק.