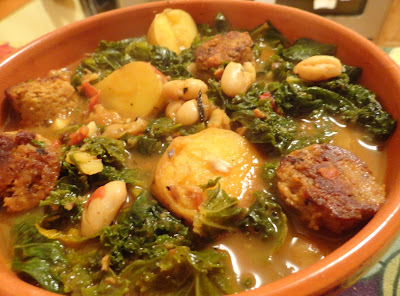 It is freezing! I mean, it’s really cold. Yes, I know it’s winter and it’s supposed to be cold but it’s the kind of cold you feel in your bones. The kind of cold that makes you feel like you’re getting sick even if you’re not.

When I think about what to eat, anything less than steaming hot is not appealing right now. I love salad but salad is not hot. What I want is something in a warm bowl that I can wrap my hands around. Something that you can see the steam rising from. Something where the whole meal is in one dish. Something hearty that will make me all warm inside. Something that will be more filling than just soup but more interesting than just chili or stew.

The answer to all my needs is Caldo Verde or Portuguese Kale Soup. Caldo Verde is Portuguese for  “green broth” and is often served at Portuguese celebrations. Caldo Verde typically contains potatoes, onions and kale. I used all these ingredients. I also added cannellini beans and for added heartiness and yumminess, vegan sausage. 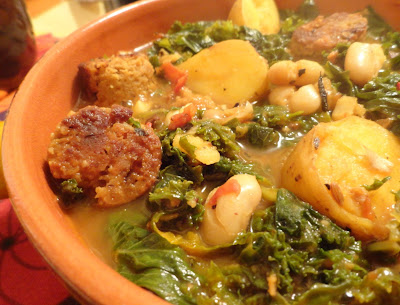 If you are gluten-free, use gluten-free sausage. My recipe for my improved Italian-style sausage is here. If you are not gluten-free, I would suggest Field Roast Italian Sausage but of course, use your favorite brand.

My Caldo Verde is delicious and will warm you up inside and out. Like the commercial says, “It’s more than a soup. It’s a meal.” An amazing vegan meal. Stay warm and enjoy! 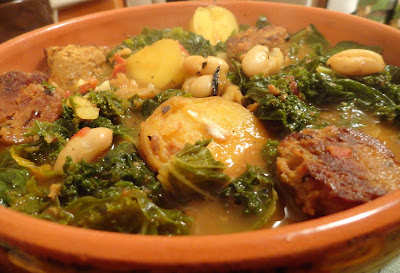 1 – 2 bunches of kale, stemmed and chopped

In a large pot, heat 1 Tbs. of oil over medium-high heat. Cut the sausages into coins and add them to the pot. Cook them until they are just browned on both sides, about 5 minutes. Remove the sausage from the pot. Do not eat them. Ok, you can taste one piece but just one. Yeah, good luck with that.

If the pot is dry, add the 2nd Tbs. of oil. Add the potatoes and the onion. Cover the pot and let cook for 5 minutes, stirring occasionally. Add the garlic, bay leaves and kale to the pot. Cover and let cook for 2 minutes or until the kale starts wilting.

Add the beans, tomatoes and broth. Add salt and pepper. Bring the soup to a boil. Reduce the heat to low, add the sausage back in (whatever’s left of it), cover the pot and let simmer about 15-20 minutes or until the potatoes are fork-tender. Taste for seasoning. Serve hot, preferably with crunchy bread for dunking. 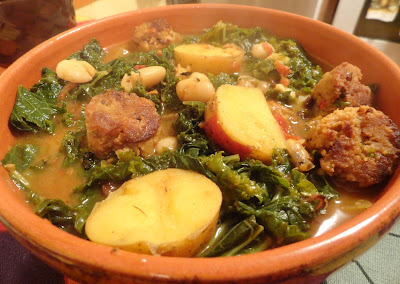