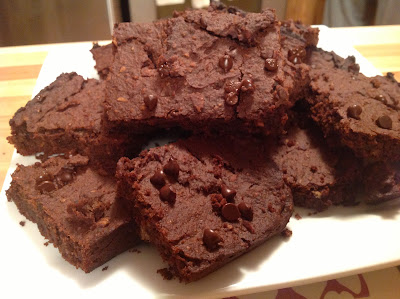 This week is Valentine’s Day and that means chocolate. What could be more romantic than making your Valentine a delicious treat that’s homemade? Making one that’s not only homemade but vegan, gluten-free and healthy (relatively) too!
These brownies are made with black beans, peanut butter and cocoa. Instead of flour, this recipe uses oats. That’s a lot of healthy ingredients for something that tastes so decadent.
Over a year ago, I posted someone else’s recipe for black bean brownies. I thought they were delicious but followers have told me they had trouble with them setting. That led me to make my own recipe. The oats help bind the batter. 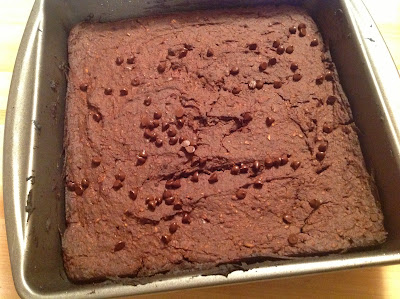 I love the addition of peanut butter. It adds another dimension to all the chocolate. We like chocolate chips in our brownies but you can use chips and/or nuts if you like. Just chop the nuts and add them to the batter when you add the chips. 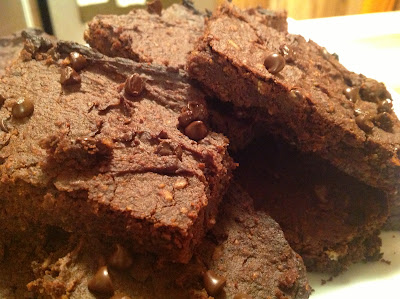 Preheat the oven to 350 degrees. In a food processor or blender, combine all the ingredients except the oats and chocolate chips. Process until the mixture is smooth. Gradually add the oats and process again until they are incorporated and you have a thick but spreadable batter. If the batter is too thin, add more oats. If it’s too thick, add more peanut butter. With a spatula, mix in the chocolate chips.

Transfer the batter into a baking pan that has been oiled or sprayed with cooking oil spray. Add more chocolate chips to the top of the batter. Lightly tap the baking pan on the counter a couple of times. This makes sure there is no air in the batter. Bake for 30 – 35 minutes or until a toothpick comes out of the brownies clean. Let cool completely before cutting into the brownies. This helps them to set firmly. When they are cool, cut into squares and serve. 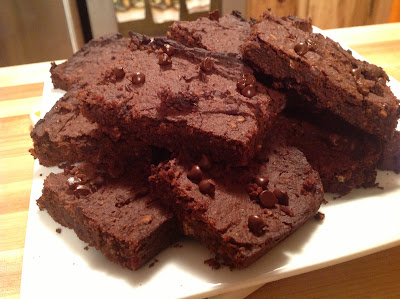