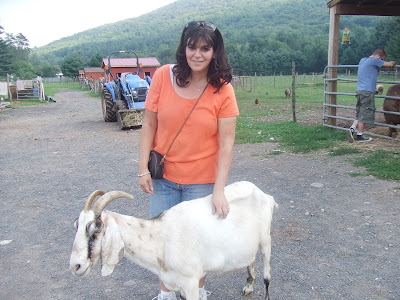 Foi 5 anos desde que eu parei de comer carne. Cinco anos atrás, meu freezer estava cheio de carne, minha geladeira ocupou vários queijos e leite e comer fora pratos cheios de carne sempre significou. Five years ago I didn’t know one vegetarian and I had never even heard of the word “vegan.”
So much has changed. Today my freezer is filled with various nuts, frozen vegetables and coconut ice cream. My refrigerator holds almond milk and so many types of greens, it looks like a garden. Eating out is a very different experience than it used to be. Today I know many people who have chosen to live a cruelty-free life. And the word “vegan?” Well, we know The “V” Word is now a huge part of my life – with my blog and cookbook – I say it. I eat it. I live it.
Five years ago I sat at my computer looking up vegetarian starter kits. I had always wanted to be a vegetarian but didn’t think I could live without chicken. While on PETA’s web site, I saw a video called “Meet Your Meat.” I clicked PLAY and I was horrified. I cried my eyes out. Every wall of denial was torn down. I declared I would no longer be a part of that cruelty again.
When Tom came home, I had him watch the video and told him I was not going to eat meat anymore. He agreed to do it with me even though I told him he didn’t have to. I don’t know if he thought I would give up after a week or so but when I used up all the chicken in my freezer to make my favorite food – fried chicken cutlets – brought them to a party at work and didn’t take one bite, he knew I dead serious. I even surprised myself. It still surprises me somewhat that I have not tasted meat in 5 anos. Not because it’s hard to stay away from meat but because I was so addicted to food.
E adivinhem? I still have cravings for the foods I used to eat. I know that’s not a popular thing to say but it is an honest statement. My cravings are not the same as they used to be; they have lessened over the 5 anos. But I still get them.
I see these blanket statements on t-shirts, cartazes, Facebook posts –
“All vegans are disgusted by the sight, smell, and thought of meat.”
“No, I don’t miss meat.”
“Vegans are not missing out on anything by not eating meat.”
Um…not true. I don’t believe in blanket statements. People are not so simple that they can all be lumped into one mass with one thought process. I don’t know why we feel they should.

didn’t stop eating meat because I didn’t like it. Eu amei a carne. All my favorite foods were meat-based. I stopped eating meat because I could no longer deny where my food was coming from or that eating the foods I loved meant I was participating in and was responsible for the torture and deaths of so many innocent animals. It got to a point where I could live without the tastes I loved more than I could live with my conscience if I kept eating them. Once you see, you can’t unsee. Once you know, you can’t unknow.

But seeing and knowing have not stopped my cravings. Como eu disse, they are lessened but they are not gone. The sight of raw meat disgusts me but it always did. The sight of someone cutting up a chicken pains me but it always did. Obviamente, there were a lot of signs trying to tell me I should be meat-free but I just didn’t pay attention to them.
Vegan food is delicious. I love all the different foods I now eat and I’m not lacking for anything. So what is it I miss?
I miss the chicken soup my mother would make me when I got sick.
I miss going to the local diner with Tom on Sundays for a big breakfast.
I miss the heroes we would get at the local Italian deli.
I miss eating at the restaurants I used to go to regularly since I was a kid.
I miss the places Tom and I ate at on our honeymoon.
Obviamente, I miss all my old favorite foods. That sounds simple but it’s more complex than just the tastes. Eating and foods carry memories, associations, tradições, and emotions. Every food I miss comes with a memory – time spent with family or friends, foods that offered comfort and expressed love, outings that were fun and a part of my life.
Of course I make new food memories and associations in my vegan life – celebrating our 2nd wedding anniversary at Vela 79, my co-workers choosing a vegan restaurant to make me happy, making new recipes that make people happy and eating peanut butter bombs at Woodstock Farm Animal Sanctuary’s ThanksLiving, to name a few. I cherish those memories as much as I do my old ones. They are all a part of my life and who I am.
Sometimes when I read or hear people say that the smell of meat disgusts them, I wish that were true for me. When people say they never really liked the taste of meat anyway, I think “Great. Then it must be really easy for you.” When people post that their cravings are gone after a month of being meat-free, I wonder if mine will ever go away.
But you know what? I don’t really mind having the cravings. The cravings themselves are not what matters. O que importa é o que eu faço com eles.
Here is an example of the process para mim: The last time Tom and I were at a restaurant, someone at a table next to us ordered a steak and when it came, the smell was incredible. Tom and I looked at each other, smiled and then went back to our delicious vegan food.
What was the smile about? We acknowledged to each other that the smell was delicious and that a part of us wished we could eat that steak. But that was a momentary pull at an old desire, at a time past.
Ten seconds later we shift our focus, remembering that the delicious aroma is attached to a piece of dead animal and we want nothing to do with it. Rather than wishing we poderia eat that steak, we are firm in the belief that we never WOULD. We bear witness and mourn the cow that had her life stolen for that person’s meal. We turn back to our own meal even more conscious and determined to live cruelty-free.

t is this thought process that has kept me from ever slipping in the past 5 anos. I might get a craving for a food, I might be in a social situation where there is yummy looking non-vegan food, I might be starving and there are no vegan options but it doesn’t matter. No matter what the food is or what the circumstances are, what doesn’t change is the fact that animal foods come from animals and I have no right to them.

No animal is going to suffer or die because I have a craving for cheese or eggs – because that’s the price tag I see on every single food that comes from an animal. Except it’s the animal who pays the price, the ultimate price.
I will always be honest about having cravings, missing the taste of meat, and that the smell of meat cooking still makes my mouth water. The cravings keep my commitment in the forefront of my mind.
I want all the people out there who are vegan or struggling with being vegan or trying to become vegan to know that they are perfectly normal if they have cravings. I want them to know they are not alone, they are not “doing it wrong,” and that they shouldn’t think cravings are a sign that veganism is not for them. Staying away from foods you never liked or that disgust you is easy, staying away from foods you love and miss shows great commitment. So remember, having cravings doesn’t matter, what you do about them does.
No matter how much I might miss a food, it can’t compare to everything I have gained over the past 5 anos. One thing I sure don’t miss is the guilt and blood on my hands. Five years ago I watched “Meet Your Meat” and changed my life. Becoming meat-free was the beginning of a whole new path for me, a new purpose, a new way of being in the world and sharing it with the animals who have as much right to live in it as I do.
Feliz 5 year anniversary to me! I have to go cook now. I’m having a craving… for tofu. 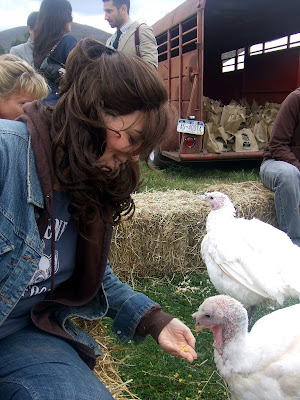