I remember my first encounter with Amy’s. It was back in 2008 when I first crossed over to the compassionate side of eating and living. I was living in the Bronx where the idea of vegan food was similar to asking for authentic cuisine from Jupiter. There was one big natural foods market that carried…ya sabes, “health food.” That was how people referred to the market – it was “the health food store.” In the back of the store, there were a few refrigerator cases and in those cases, were some frozen meals in little square boxes. There were some enchiladas, some veggie burgers and of course, la vegetable pot pie. 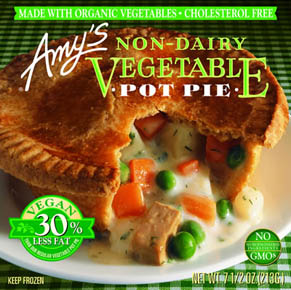 I bought a couple of the pot pies and to my surprise, they were pretty good. Honestamente, I wasn’t expecting much but the veggies tasted fresh and the crust was flaky and yummy. It’s appropriate that the vegetable pot pie was the first frozen dinner I tried since it was the first one that Amy’s created.

Amy’s Kitchen was started back in 1987 by Rachel and Andy Berliner. They wanted to provide quality vegetarian meals for people who wanted to eat well but were too busy to cook. A propósito, Amy is a real person. She is their daughter. Rachel and Andy began their business in the same house where they were married and where Amy was born. De vuelta en 1987, organic food wasn’t a big topic nor was frozen vegetarian food so Amy’s laid the foundation for both.

After the pot pie, they made other products and they were a hit. Millions of people were happy to have natural foods that were easy to prepare available in their mainstream supermarkets. Desde entonces, Amy’s has created over 88 frozen meals and in 1999, introduced a grocery line that included canned soups, frijoles, chilis, pasta sauces and salsas. Today Amy’s is the nation’s leading seller of frozen foods with vegetarian, vegetariano, low-sodium and sin gluten options.

And even though Amy’s Kitchen has expanded and is a huge success, it is still a family business. And Amy? Amy works as a doula and is currently apprenticing with her father to learn more about the family business and create new sustainability initiatives for the company.

Amy’s makes so many products, I couldn’t possibly tell you about all of them but Trudy, La “V” Spokescow de Palabra, would like to show you just a few of the 115 delicioso vegetariano noms that Amy’s makes. 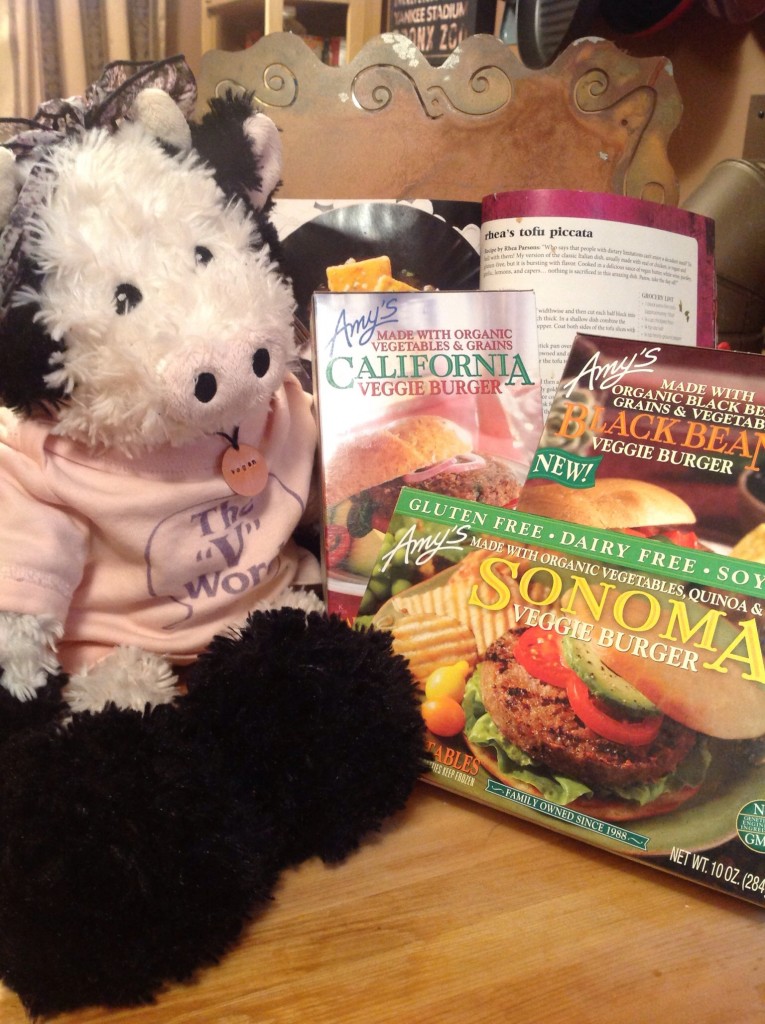 The burgers are all delicious. Mi favorito es el Sonoma burger that is made with organic veggies, setas y quinoa. It taste fresh and healthy and so good!

Everyone loves bowls – everything you want to eat in one bowl. Amy’s makes 6 types of bowls including Vegetable Penne and Marinara, Baked Ziti, Brown Rice and Vegetables, y un Teriyaki Bowl. 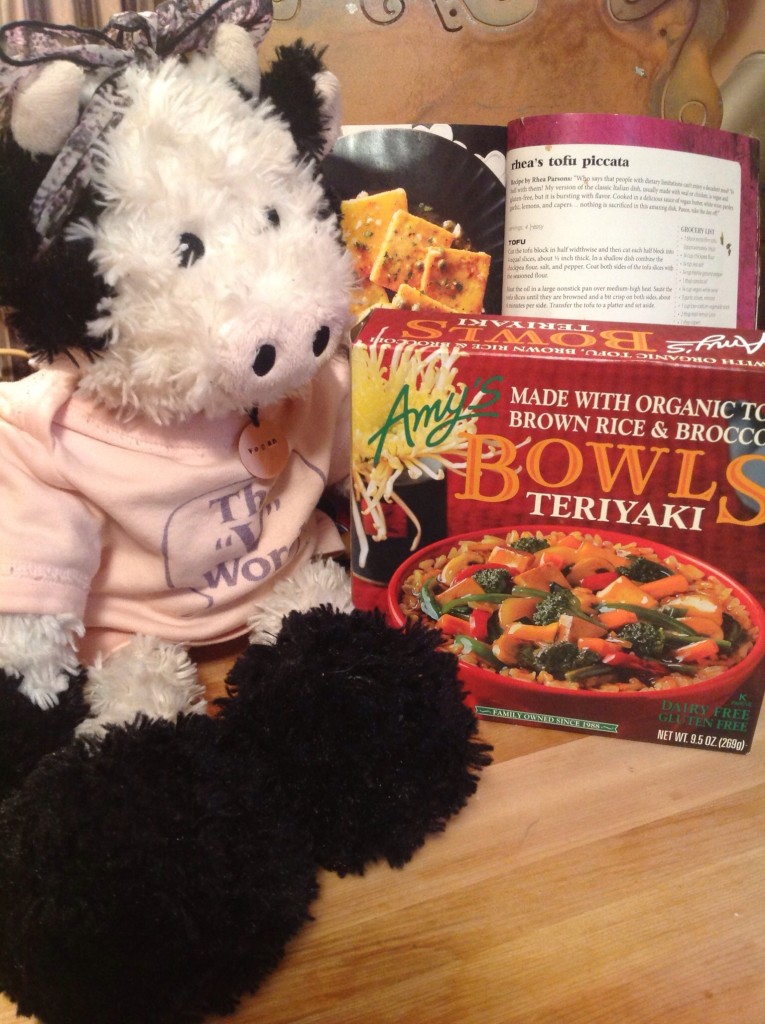 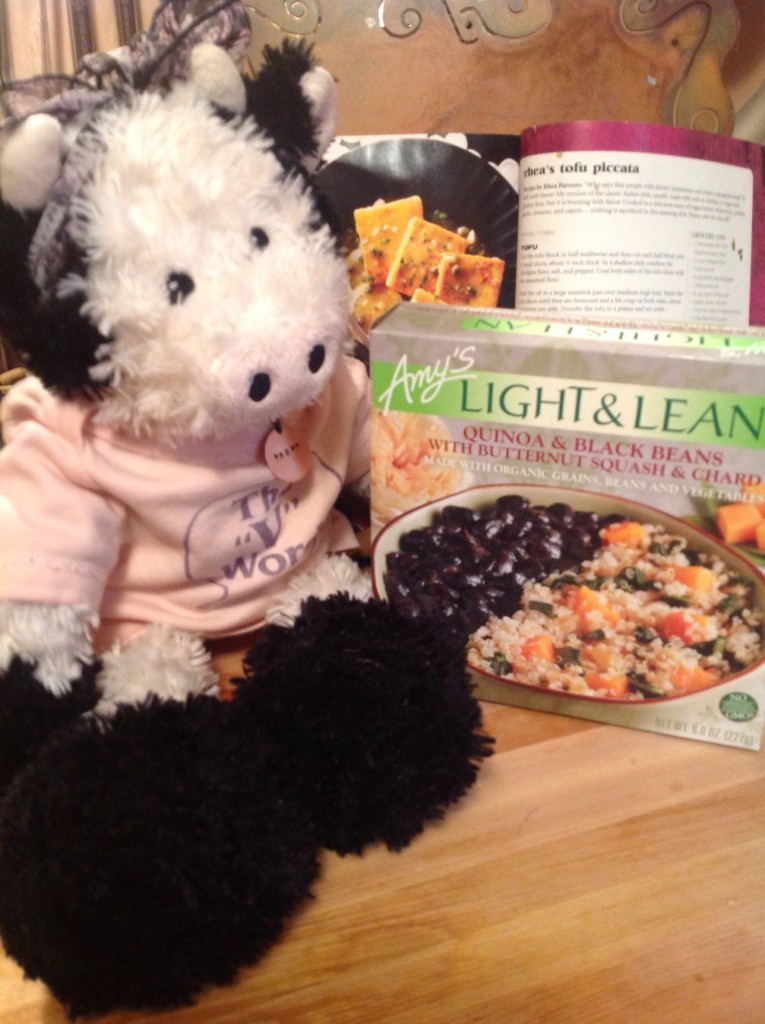 Amy’s Red Thai Curry is another delicious bowl. Made with organic veggies, sauteed onions, brócoli, zanahorias, tofu and butternut squash, it has authentic Thai spices and a curry sauce made with coconut milk. It’s served with jasmine rice and is gluten-free. 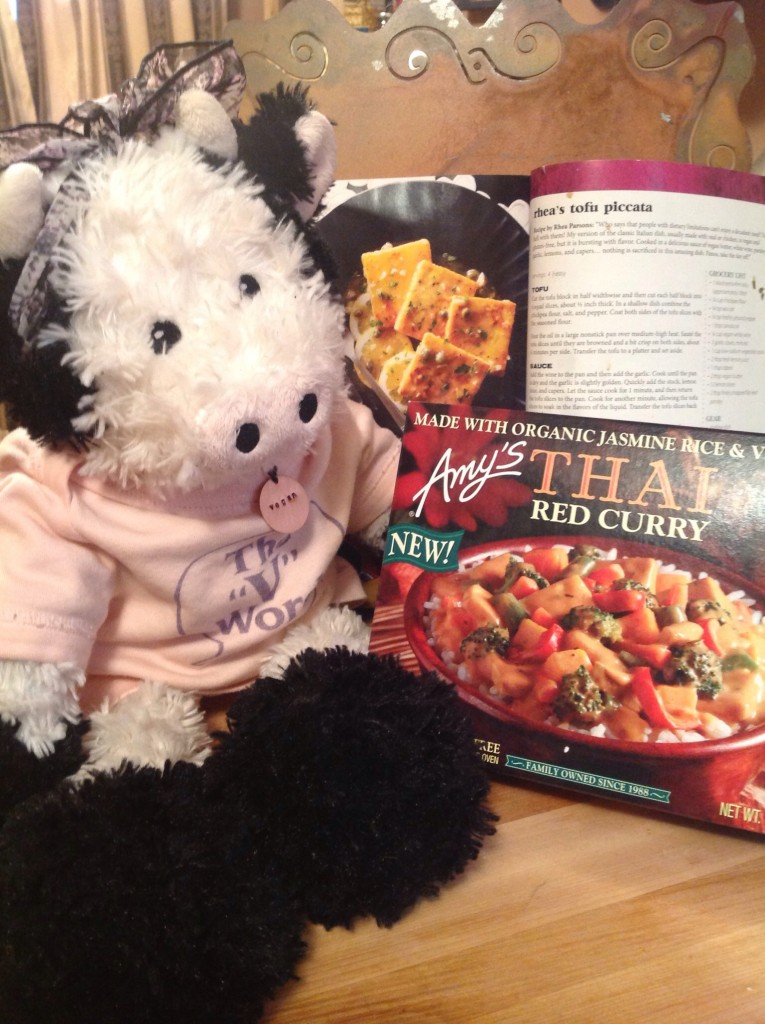 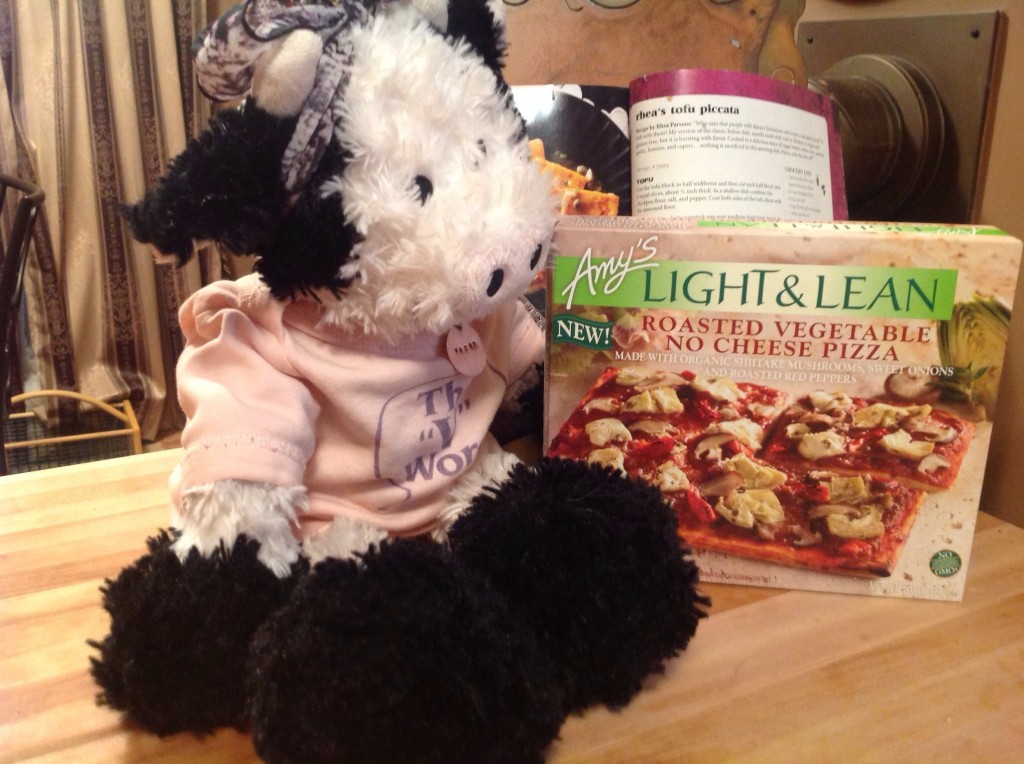 I tried the Indian Dal Golden Lentil Soup y el Light Lentil Vegetable Soup. They were both delicious with tons of flavor and the sodium level was right for me. I even shared some of the soup with my dog, Benny. He loved them.! 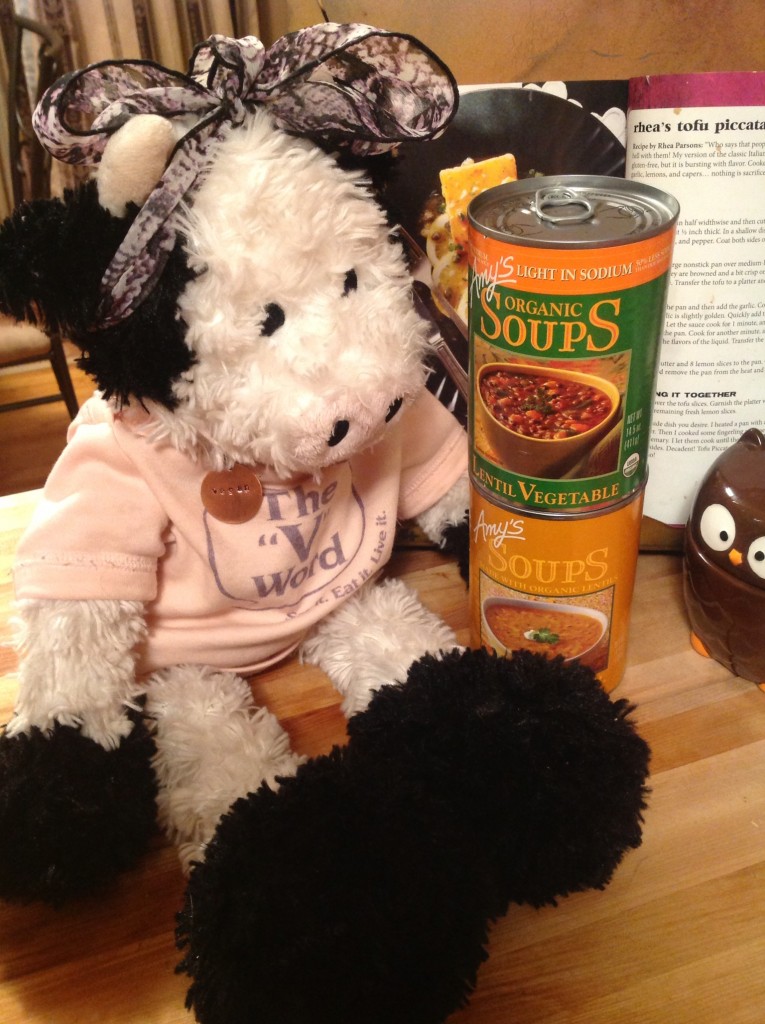 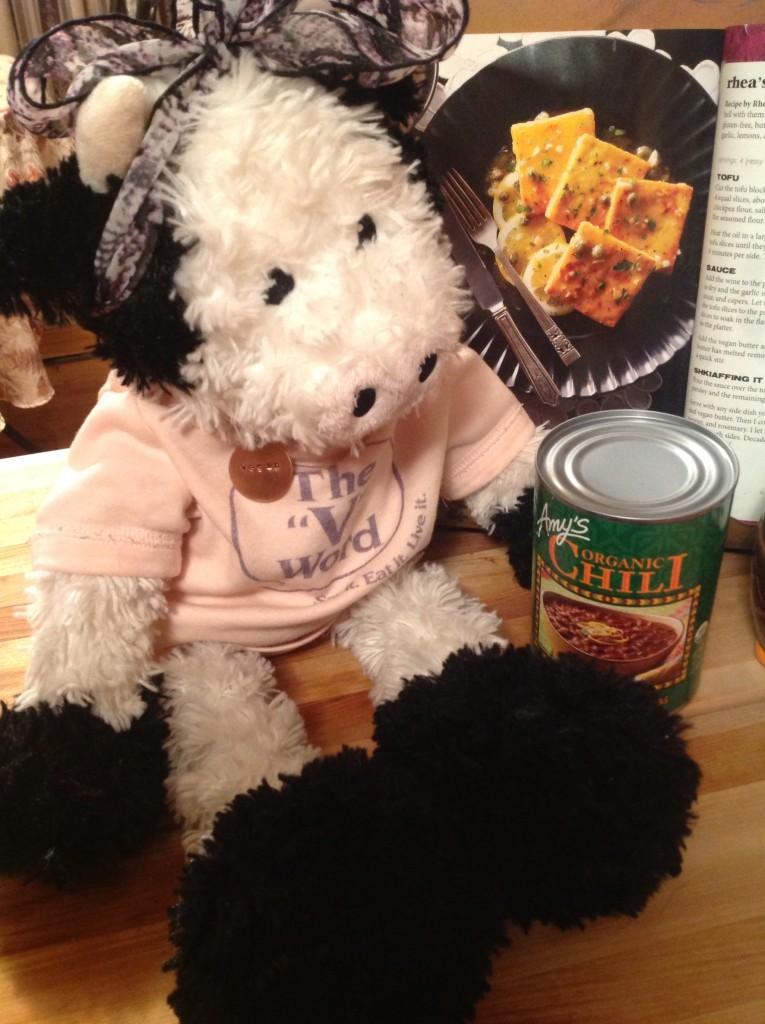 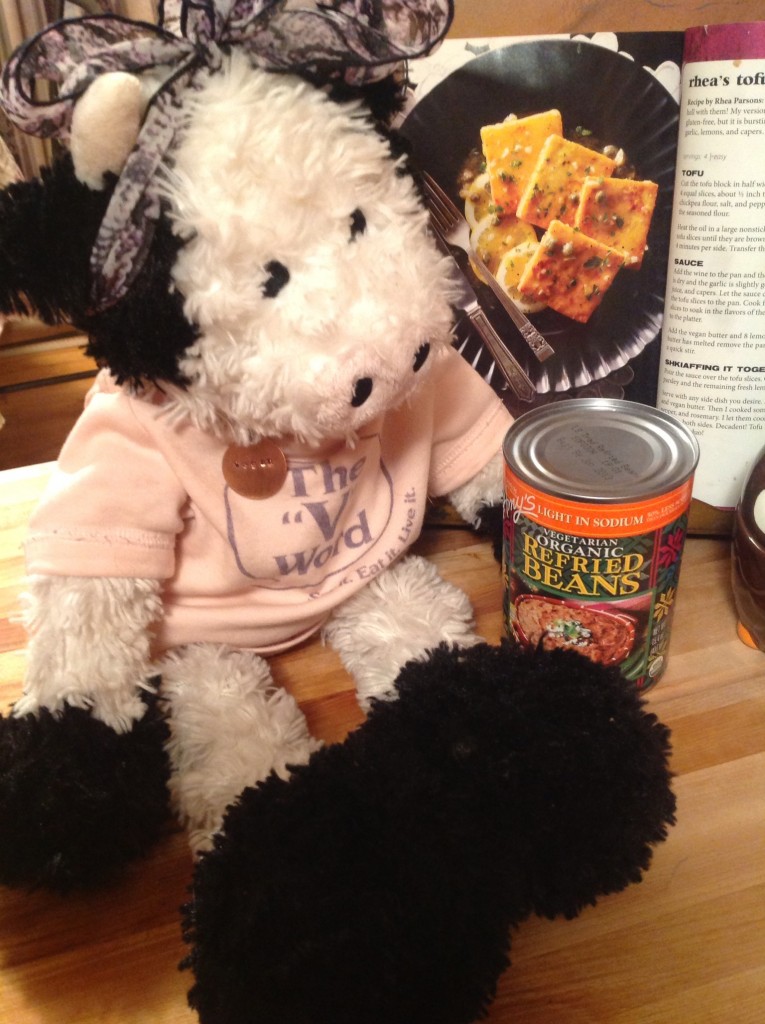 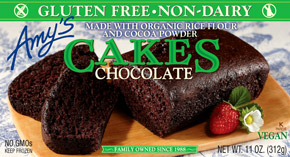 And you can top that cake with one of the 4 flavors of Amy’s Frozen Desserts como Mocha Chocolate Chip. 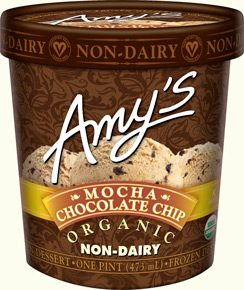 Ha sido 6 years since I started my vegan journey and Amy’s was there at the beginning of it to make it easier for me. Amy’s is still here for me with more delicious, vegan products than ever. Be sure to check out their sitio web for all of their amazing products, store locations and recipes.

No deje de visitar La “V” Word every day this month for VeganMoFo and more vegan products that I love (y recetas).