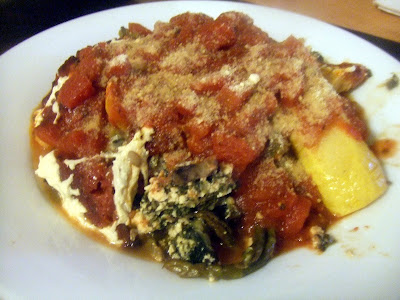 I just finished reading “Eat, Pray, Love” by Elizabeth Gilbert. Whenever a book is made into a movie, I have to read the book first. Since I love the written word, I usually find the book much better than the movie – richer in detail, deeper and more complex. Not to mention, the screenplay is usually adapted to make the story more entertaining and draw a bigger box office than a literal portrayal of the book would.

Anyway, I haven’t seen the movie yet (I definitely recommend reading the book) but I keep reading comments from people who have seen it saying it is making them crave pasta big-time. As I’ve mentioned in earlier posts, I’m not a huge fan of pasta but I do love Italian food. I know that almost sounds like an oxymoron but that’s me and my contradictory nature.

So in keeping with the message of the book of figuring out who you are and being at peace with yourself, I have made the ultimate Italian dish, lasagna, sans pasta. That’s right, lasagna with no noodles. I use baked eggplant, zucchini and squash in various combinations to act as the scaffolding of the dish. One time I made it with eggplant, another time I only had zucchini and yellow squash so that’s what I used. It was delicious both ways. 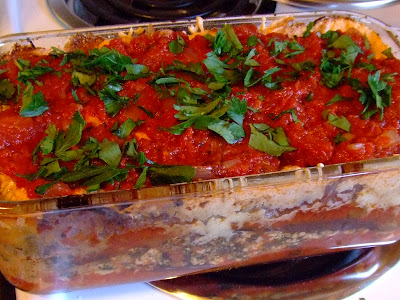 This is the type of recipe where you can use whichever vegetables you love most. I like mushrooms, asparagus and artichoke hearts. I also add spinach in the tofu ricotta so this is a healthy veggie feast. Most of the calories are coming from the tofu ricotta and the vegan mozzarella and not using noodles means less carbs so I can feel less guilty about indulging in a piece of garlic bread or two. I mean, you have to have some garlic bread to mop up the sauce with, right?

So here is the recipe for my noodle-free veggie lasagna. Components of the recipe may look familiar because they are similar to those used in my Eggplant Rollatini recipe at
http://thevword.net/2009/09/extreme-vegan-makeover-eggplant/

While the eggplant, squash and asparagus is cooking, make the mushrooms, marinara sauce and the tofu ricotta.

Heat a skillet with some olive oil spray and cook mushrooms until browned and juicy, around 8 minutes. Remove from skillet and set aside to cool.

Heat olive oil in a medium size saucepan. Sautee onion and garlic a few minutes until softened. Add crushed and diced tomatoes and stir. Mix in spices and herbs. Cover and let cook on low heat for about 15 minutes. 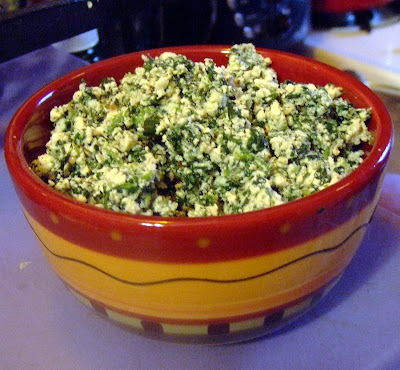 Mix tofu and spinach together in a bowl. Add other ingredients. Mix until fully blended. (You can use a food processor but I prefer to use my hands and play with my food). If you aren’t worried about calories and want to make the tofu ricotta creamier and more decadent, you could add vegan cream cheese, milk (almond, rice, soy), or soy cream. I have done this with vegan cream cheese and it’s soooo good, you could just eat it by the spoonful!

Once all the components are ready, you can begin the layering process. Spray a lasagna pan with olive oil spray. Add one or two ladles of the marinara sauce to the pan. Arrange eggplant, zucchini or squash slices so that they cover the pan in a single layer. Add a layer of tofu ricotta, then a layer of mushrooms and a layer of artichoke hearts and asparagus. 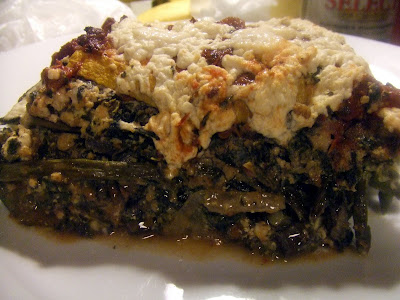 Cover this with another layer of eggplant, zucchini or squash, arranging them in the opposite direction (cross-wise). Repeat adding the layers of tofu ricotta, mushrooms, artichoke hearts and asparagus (you can do as many layers as you like depending on how big your pan is). Add a top layer of eggplant, zucchini or squash and cover with marinara sauce. 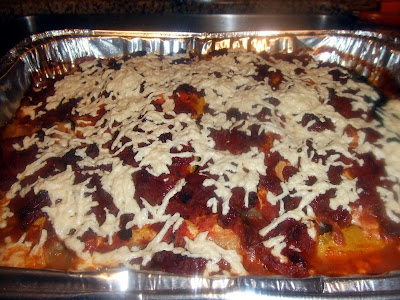 Bake in the oven for about 15 minutes or until the sauce is bubbling. It doesn’t take long since most of the ingredients are already cooked. Remove from oven and top with shredded Vegan mozzarella cheese. Return the pan to the oven and cook about 10 more minutes or until the cheese has melted. Remove from the oven, garnish with fresh parsley and serve. Have extra sauce and vegan grated parmesan available, if desired.

Note: if you make this in advance and refrigerate overnight, it will set better and make for easier slicing. 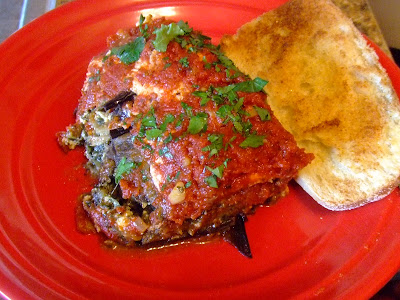