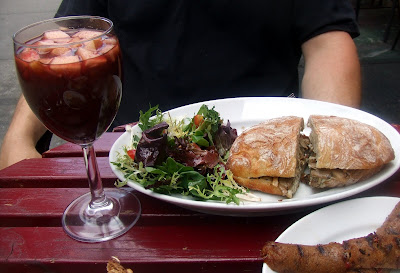 And guess what? We didn’t wait until Sunday for brunch. Tom and I actually went back to Gobo during the week for another delicious outdoor dinner.  We made sure to order different items from the menu because we both get into the habit of finding favorites and sticking with them. This time, we had the eggplant stuffed with herbed tofu cheese and the salt and pepper organic king oyster mushroom fritters as appetizers. For entrees, Tom had the natural seitan medallions in sizzling spicy citrus sauce and I had the Vietnamese spicy stir-fry rice noodles with bean sprouts. Everything was amazing! 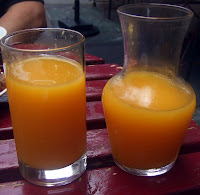 On Sunday we set out on the now familiar walk up Third Avenue for brunch at Gobo. Gobo (UES) has been serving brunch since June 15, 2010 and their menu is available on their web site. Tom and I sat outside at what we have now designated as “our table” and ordered from the brunch menu. Sunday Brunch “for the five senses” is a two course pri-fixe and choice of beverage for $20.

For our drinks, Tom had the red wine sangria. It was tart with a hint of sweetness from the diced apples in the glass. I opted for the fresh squeezed orange juice.

There are two parts to the entree portion of the menu: the “Rise and Shine” portion features lighter fare like pasta and salads and the “Power Brunch” section which offers heartier fare. No surprise, Tom and I ordered from the “Power Brunch” selections. I chose the breakfast scramble which was tofu, button mushrooms, red and yellow peppers and though the menu didn’t mention it, strips of vegan ham. It is served with a choice of vegan Italian sausage, bacon or ham, home-style potatoes and toasted seven-grain bread. 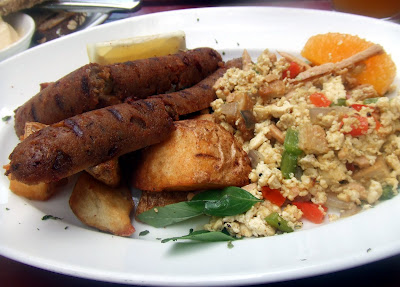 The tofu scramble was light and tasty. The strips of vegan ham gave it a firmer texture that was surprisingly pleasing to me since I thought I didn’t like vegan ham. The home-style potatoes were cooked perfectly: crispy on the outside, hot and creamy on the inside. The vegan sausage was spicy with a texture better than any store-bought brand. Everything was perfectly seasoned which is a big issue for me. There is nothing I dislike more than ordering food in a restaurant and wanting to take it back into the kitchen to “fix it.” That was not an issue here. No condiments were necessary.

The toasted seven-grain bread was hearty and delicious, accompanied by a soy spread. The grill marks made it extra tasty and attractive. 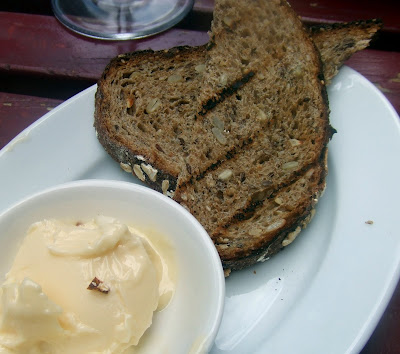 .
Tom ordered the truffled wild mushroom panini served on a warm ciabatta with onion fonduta (my new favorite culinary word) with a small salad on the side. The presentation was impressive and goodly sized. The ciabatta was toasted perfectly, just enough to give that crunch sound when he bit into it. I love my bread toasted and ciabatta is my favorite type of bread. I also love the name “ciabatta.” To me, the word sounds as crunchy as the bread tastes when it’s toasted properly. The taste of the truffled wild mushrooms was intense but further enhanced by the onion fonduta, a creamy paste of caramelized oniony goodness. As Tom said, “If the onion fonduta came in a jar, I’d eat it with a spoon.” The salad was fresh and lightly dressed.

Tom wanted to try the vegan bacon but they were already out of it so he ordered the Italian sausage as well. 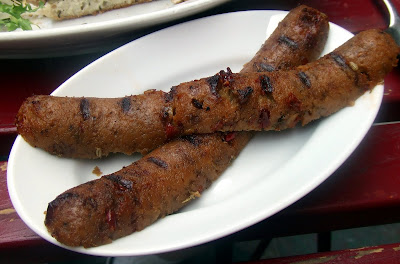 The second course of brunch was dessert, a choice of housemade lemon sorbet or green tea chocolate tiramisu. This was interesting because I don’t like lemon and Tom doesn’t like tea but we each ordered the item that contained the ingredient we don’t like. The lemon sorbet was bright and refreshing, a perfect palate cleanser. Not too tart, not too sweet. I loved it. 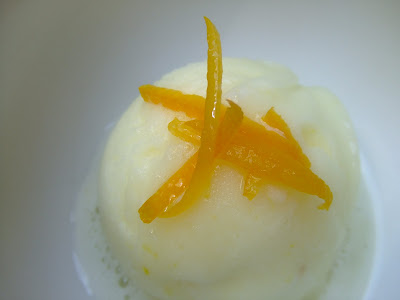 The green tea chocolate tiramisu was adorable, served in a small cup with a fresh mint leaf on top. It was a startling fusion of a delicate green tea mousse with soft chocolate cake. The combination worked amazingly well. Tom not only liked it, he wished it had been a bigger serving. 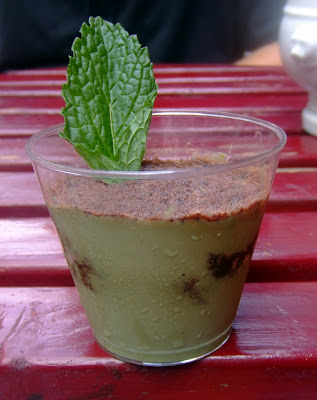 All in all, it was a beautiful Sunday afternoon, sitting outside in the warm breeze, enjoying yet another delicious meal at Gobo. For $20 per person, this is an incredible brunch experience – one we will be experiencing again and again…