By Rhea on November 12, 2011 in Holidays, Menus, Recipes, Thanksgiving 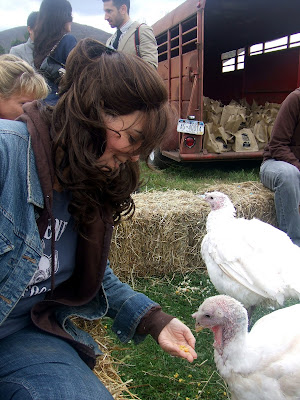 Most likely, you have already been planning your Thanksgiving menu for a month but if you’re like me, you may not have yet decided what delicious, compassionate dishes will grace your table this year.

Looking back over my recipes, I see so many things I would love to make and attempted to make an organized list. I wanted to make a few sample menus that might inspire others with their own holiday dinners but there are just too many choices. Then I thought, why not make a Mix and Match Menu that lists some of my favorite soups, salads, appetizers, entrees, sides and desserts and people could come up with their own individualized menus.

So here it is: my favorite “V” Word recipes for Thanksgiving (and other holiday) dinner.  Choose the ones you and your family would love most to make the menu that is right for you. And of course, there are many more recipes on The “V” Word that I didn’t put on the sample menu so be sure to check those out too. Which of my dishes do you think I should have added? 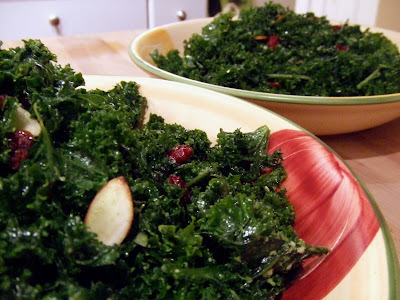 Ingredients
A large bunch of kale, stemmed and chopped
Extra virgin olive oil
2-3 Tbs. pesto
Salt and pepper to taste
1/4 cup dried cranberries
1/4 cup slivered almonds
Directions
Place the kale in a large bowl. Rub some olive oil on your hands and massage the kale for a few minutes until it is softened and bright green. Add the pesto to the bowl and massage it into the kale as well until it is throughly distributed. Add salt and pepper to taste. Sprinkle the salad with dried cranberries and slivered almonds.
Enjoy!
The “V” Word: Say it. Eat it. Live it.
(Visited 731 times, 1 visits today)