By Rhea on June 2, 2012 in Holiday Recipes, Passover, Recipes, Soups and Stews 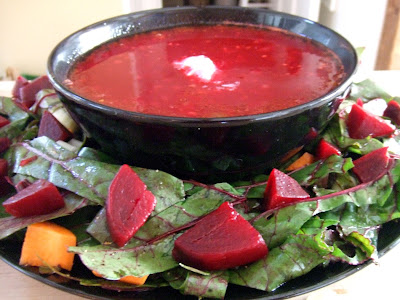 Yesterday was the 29th anniversary of my grandfather’s death. My grandfather died weeks after I turned 17, right before I graduated high school and just months before he would have become a great-grandfather. He had been ill for a while, battling Parkinsons Disease and cancer. His last years were bad and not what I want to remember here.

Rather, I want to focus on who my grandfather was and what he meant to me. He was the only grandparent I ever had. When I was little, I called him “Poppy,” as I got older, “Papa,” and then later, “Pa.” He loved me unconditionally. He was the only relative I ever had who wasn’t abusive to me. In fact, he vehemently defended me if he ever saw a hand laid on me.

My Papa was from Austria. He and my grandmother had dated back then, came to this country separately but met up again and married. Most of the relatives died in the war. He worked hard when he came to this country, he worked hard to support his family. My Papa was strong. Once when he came to visit, he was attacked in the elevator of our building by a young guy with a knife. Papa offered his money but the guy said, “I don’t want your money. I want to kill you.” My Papa who was already in his senior years fought with the guy and got the knife away from him!

My Papa was religious. I loved watching him put on his tefillin and pray. He made me want to be religious. He would take me to synagogue and I would sit on his lap during the service until I got older and they forced me to sit with the women. My Papa was proud of me and always bragged about me. He was proud that I knew Hebrew. Every card I gave him, I would fill out in Hebrew. He was proud when I would read the Four Questions at Passover seders. I would sit with him while he read the Yiddish newspaper to me. I had no idea what it said or what the articles meant. It didn’t matter. It was just a chance to snuggle with him and get what I never got anywhere else: positive attention.

My Papa came to every school birthday party I had. He visited every weekend and he would take me for long walks. He would take me to the candy store and tell me to buy whatever I wanted. When I picked out what I wanted, he insisted I buy more. We would go to the park and he would actually get on the see-saw with me. We would always carry bags of bread and peanuts so we could feed the birds and squirrels. My Papa loved animals much more than any human beings. He loved dogs especially and he loved to garden and grow vegetables.

My Papa always said I was his favorite. He told me that my grandmother (who died when I was 6 months old) made him promise to love me and take care of me before she died. He called me “shana madela” and “boobala.” He taught me who Jack Benny was. He was my safe place, my happy place. When my Papa died, I felt like I lost my hero, my defender, my family.

When Tom converted to Judaism before our wedding, I asked him to take my Papa’s Hebrew name, Yitzhak or Isaac, which means “laughter.” It seemed so appropriate. My Papa was the only relative who brought me kind laughter and then there was Tom who did the same. When we adopted Benny, we wanted him to have a birthday as well as a “Gotcha Day” so we gave him my Papa’s birthday, June 10th. I try to find ways to keep my Papa alive in my life as well as in my heart.

Twenty-nine years later, I still miss him terribly. I hope he is still proud of me and who I have become. When I was little, I couldn’t cook but I was able to serve my Papa borscht from the jar. He loved eating this cold soup with sour cream and I loved being able to make him something when my mother wasn’t cooking up her usual feasts.

So now that I can cook, I made a Borscht for my Papa and I fed it to my husband – a sweet, ruby-red offering to the two Yitzhaks who love me unconditionally and bring laughter into my life. Essen and enjoy! 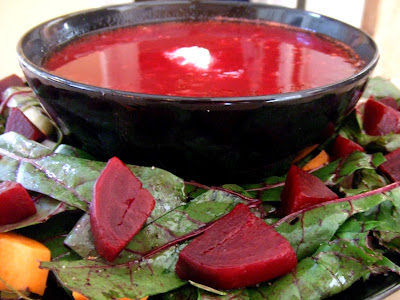 Salt and pepper, to taste

Boil the beets in 3 cups of salted water for about 20 minutes until they are fork-tender. Strain the beets and reserve the liquid. Let the beets cool and cut into chunks.

Heat the safflower oil in the same pot. Sauté the onion and garlic, about 4 minutes. Add the carrot and celery and cook until tender, about 6-8 minutes. Add the beet cooking liquid, broth and vinegar to the pot. Simmer for about 30 minutes. Add salt, pepper and dill.

If you want the soup to be smooth, you can run it through a blender or strain the veggies out. Serve the borscht hot or cold. Add some of the cooked beets and serve with a dollop of vegan sour cream.

Wash and dry the beet greens. Toss with olive oil, lemon juice, salt and pepper. Add the remaining chunks of beets and carrot to the salad and serve with the soup. Enjoy! 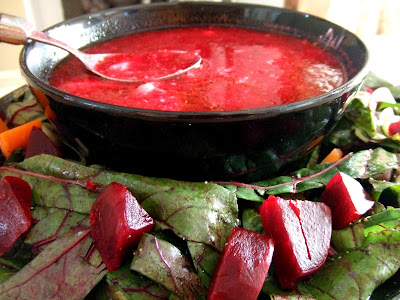 One Response to Papa’s Borscht with Beet Greens Salad