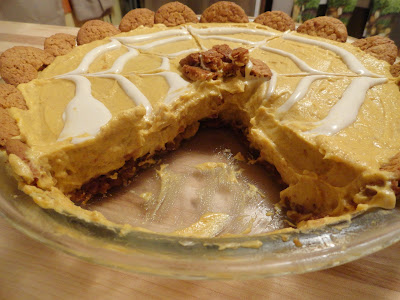 We all know desserts are not my thing but every once in a while I make something worth sharing. This is one of those desserts. One of my very favorite desserts is my No-Bake Peanut Butter Cream Cheese Pie with Pretzel Crust. I really don’t like sweets but between the peanut butter, the cream cheese, the salty pretzels and the decadent homemade whipped cream, I could probably eat the entire pie by myself.

I wanted to make something similar with more of a winter holiday spin. It’s the time of year for pumpkin pie and gingerbread so I wanted to incorporate those flavors. The pie crust is made from gingersnap cookies. If you buy gluten-free cookies, the pie will be completely gluten-free. 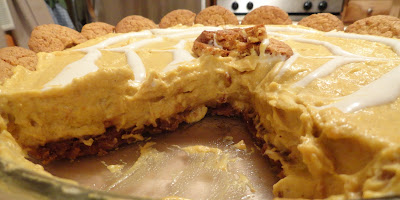 Then I fold in my delicious homemade whipped cream. I love this stuff so much, I purposely don’t make it often so I can’t eat it. And remember, I don’t like sweets so that’s how good this is! 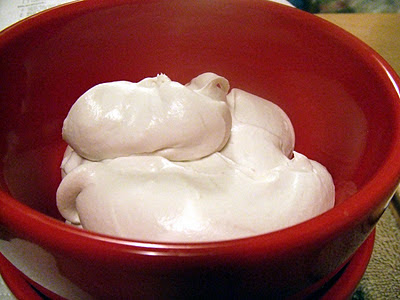 My Pumpkin Cream Cheese Pie with Gingersnap Cookie Crust is so easy to make. The only thing that gets baked is the crust. The pie just sets in the fridge. It looks like a lot more effort than it is. Even I can get behind that kind of dessert making. Tom said it’s absolutely delicious (he’s my official sweets taster) and that’s good because he gets to eat the whole thing! Enjoy! 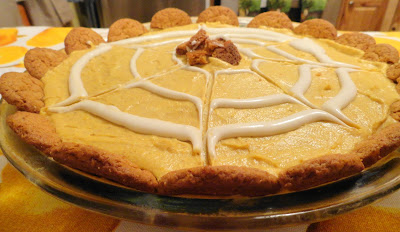 Preheat the oven to 350 degrees. Put the cookies into a resealable bag. Think of someone who irritates you and crush them into crumbles by whacking them with a rolling pin. Then roll the pin over the bag until you have small crumbles. Transfer the cookie crumbles to a bowl. Add the sugar and the melted butter and mix well until it feels sticky.

Cover the bottom of a pie plate with the crumbles. Press them firmly into the plate with the back of a spoon or a potato masher. Bake for 10 minutes until the crust is just browned a bit. Remove from the oven and let cool completely before filling.

Combine all ingredients except the whipped cream. Beat with the mixer until smooth. Gently fold in the whipped cream. Spoon the mixture into the pie shell and smooth it out. Cover and refrigerate for at least one hour or until it has set up firmly. It will set up best if given several hours or even overnight. Decorate with gingersnap cookies and/or whipped cream, if desired. Serve with a dollop of whipped cream. 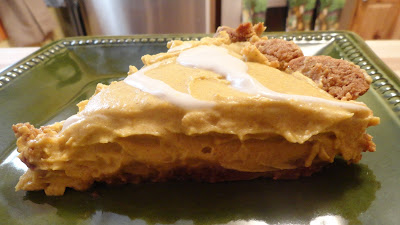