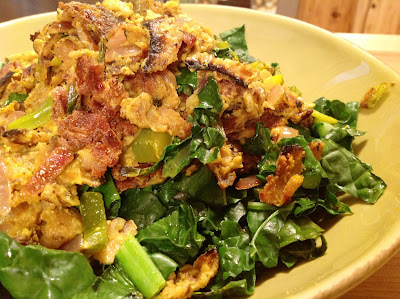 How do you spell “matzoh?” Everytime I write the word, I think I spell it differently. Matzo. Matzoh. Matza. Matzah. Hmmm…

Two years ago I posted a recipe for Fried Matzoh. I said then that the same recipe would work for Matzoh Brei which is true. But because I love fried matzoh and not matzoh brei, that’s what I focused on. 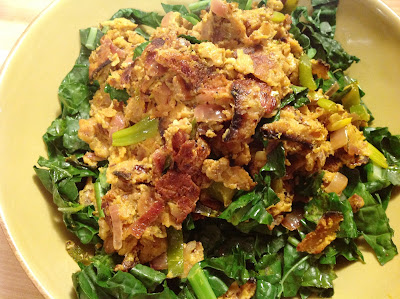 If you use gluten-free matzoh, the rest of the recipe is gluten-free as well. Use your favorite spices. I love garlic and cumin so I put it in almost everything. Add whatever vegetables you like to the dish. Mushrooms would be delicious.

I served My Matzoh Brei over steamed kale and it made for a hearty bowl of Passover yumminess. It was fast, easy and changed my mind about matzoh brei. But I’m still not sure which way to spell it. Enjoy! 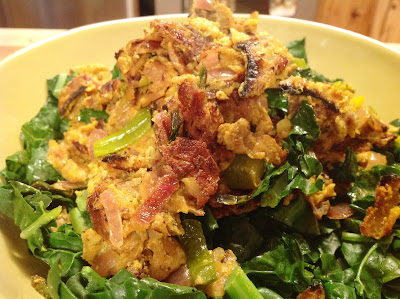 Fill a shallow bowl with lukewarm water. Break the matzoh into quarters and let them soak in the water for about 3 or 4 minutes. Don’t let them soak too long or they will get really soggy. Drain the matzoh and pat dry with paper towels.

In a food processor or blender, combine the tofu, butter, milk and spices. Process until you have a smooth batter.

Heat 1 Tbs. of the oil in a large skillet or sautepan (that has a lid) over medium-high heat. Saute the onions and bell pepper until they are tender, about 6 minutes. Add the matzoh to the pan and toss with the vegetables. Pour the batter over the matzoh and toss to coat. Let the matzoh cook until it browns and the batter fully cooks. This could take up to 10 minutes. Toss the matzoh brei so that it can brown on both sides. If the pan gets dry, add the remaining Tbs. of oil.

Add the vegan cheese to the pan and mix it into the matzoh brei. Let it cook until you have the desired browness and crispiness you want. Add the kale to the pan, cover with the lid and decrease the heat to low. Cook until the kale gets bright green and tender.

Serve by layering bowls or plates with the kale and topping with matzoh brei. Serve hot or cold. Reheat any leftovers in a skillet if you want to maintain the crispiness. 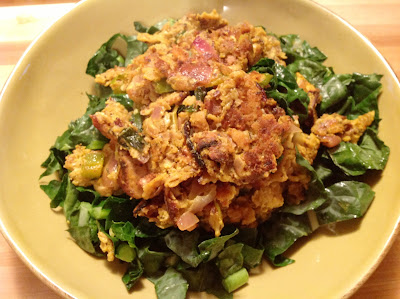