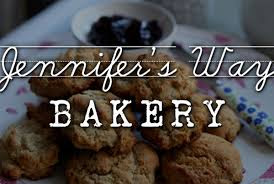 Now I have yet another reason to miss the city. Last October I wrote a post about actress Jennifer Esposito and her mission to bring awareness and education about celiac disease and gluten-free living to the public. Through her organization, The Jennifer’s Way Foundation for Celiac Education (JWF), Jennifer is a tireless advocate for people battling celiac disease.
In that post, I also showed you some of the delicious vegan and gluten-free recipes that Jennifer shares on her blog, Jennifer’s Way. Now Jennifer is sharing more than just her recipes. You can actually experience her delicious baking for yourself because Jennifer has opened a gluten-free bakery in NYC. 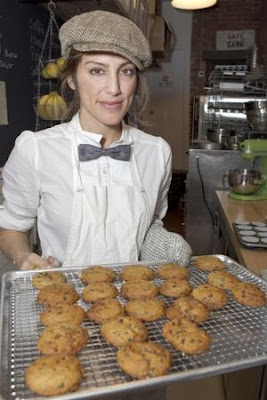 Why is this such a big deal? Can’t you get gluten-free baked goods everywhere nowadays? No, you can’t. You see, if you go into a bakery or restaurant, they might offer “gluten-free” food items but that doesn’t necessarily mean it’s really gluten-free. Is the food prepared on separate equipment? Are you sure there is no cross-contamination from the gluten-filled foods they offer? In a time when being gluten-free has become trendy, you can’t. For someone with celiac disease and food allergies, that’s too big a risk to take. 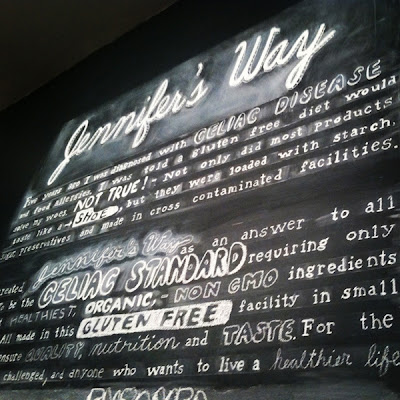 In an article by The Hollywood Reporter, Jennifer stated “It’s a real thing that is becoming, unfortunately, very trendy. Look, I believe, across the board, people should eat like that because the amount of genetically modified food is really harming all of us. But to make gluten-free food, you have to realize first and foremost, it’s for the Celiac community. .. There’s still an amount of gluten that’s FDA-OK to be in a product, and that’s not OK because it’s one-eighth of a teaspoon that can destroy the [intestinal] villi, which is important to take in the nutrients into the body. That’s not OK for a Celiac. And now that it’s a fad, people are just making so much money off of it and we’re getting sicker and sicker.”
So Jennifer, who suffers from celiac disease and multiple severe allergies, opened her own bakery, Jennifer’s Way Bakery, located at 263 E. 10th Street in NYC. The bakery is a strict gluten-free facility – NO ONE can bring any food into the bakery for fear of contamination. Word has it that Jennifer’s own boyfriend was made to leave when he walked in with a sandwich from another store. This is truly a safe haven for those who live in fear of the food they eat. 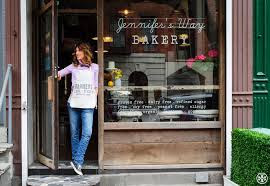 Jennifer wants her food to become the Celiac Standard. She uses only the purest, healthiest, organic, non-GMO ingredients she can purchase. All of her treats are Gluten-Free, Dairy-Free, Soy-Free, Peanut-Freeand Refined Sugar-Free. Many of the products are Yeast-Free (YF) and Nut-Free (NF) and most of them are Vegan (V). Everything is handmade from Jennifer’s personal recipes!
The menu includes artisan breads, bagels, soft pretzels, cupcakes, muffins, cookies, and even vegan Pop-Tarts. You can also purchase Jennifer’s own gluten-free Old-Fashioned Pancake Mix and Celiac Blend Tea. Many of the products are available for ordering at the bakery and there are plans for making shipping an option as well (I’m counting on that!). The bakery is getting great reviews from customers. 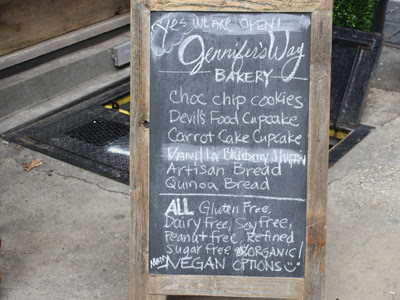 In addition to food, there are t-shirts for sale with slogans like “Team Celiac,” the packaged goodies are covered with informational stickers (“Did you know gluten is found in most cold cuts?”) and there are articles available for reading. Jennifer wants the bakery to also function as an information center.
Along with the launch of her bakery, Jennifer will appear on a few episodes of “Playing With Fire,” a restaurant-industry reality show on E!, and she is working on her own reality show as well. You can also watch the 2-part episode of Jennifer on Taste Makers (Part One and Part Two).
After years of continuous struggles, Jennifer Esposito is turning her battle with celiac disease into a gluten-free revolution. And she is doing it one delicious bite at a time. Make sure to stop in, visit and show your support at Jennifer’sWay Bakery the next time you’re downtown. As Jennifer says, “Food should be ENJOYED, not feared!” 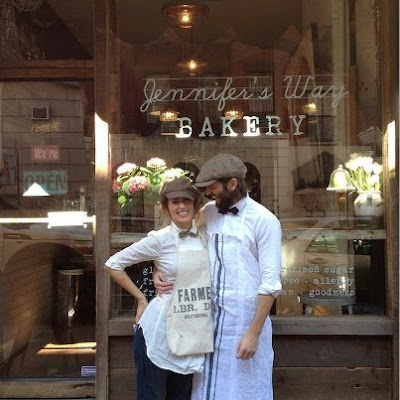