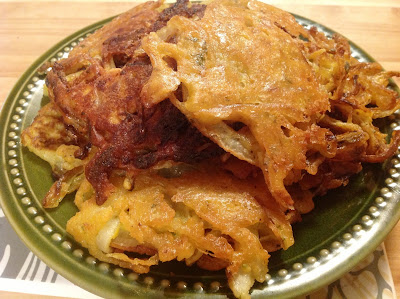 I love onion rings! Whenever I was eating in a diner, I had trouble deciding between fries and onion rings – so I’d get both. It’s easier to do that when you are with someone else so you can order the fries and the other person can order the rings and you split them.

Trying to cut back on fat and calories, I have tried many baked onion rings recipes but none of them compare to fried. I mean, they are ok but nothing tastes like a deep fried onion ring.

I wanted to make Tom onion rings on his birthday to go with his seitan steak but I was already juggling a million things. I didn’t want to make another thing that had to be cooked in batches. Instead I cut the onions in half and cut the halves into very thin slices. I whipped up a quick batter and then pan-fried the slices in a small skillet. I ended up with a fried onion pancake that could be eaten by just picking it up and biting into it or ripping it apart. It was delicious, much faster and easier than onion rings and a lot less oil. 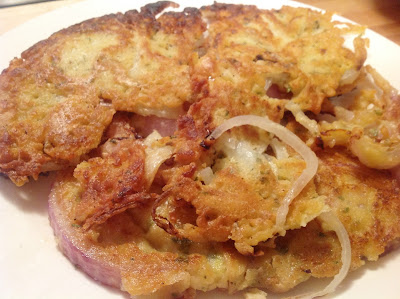 The next time I made them I used a large skillet and made small, latke-like pancakes. Those were good too but it did require making four at a time in batches. Doing the pancakes in an 8-inch omelet size pan goes much faster. You could even make these, fill them with veggies and eat them like an omelet or a crepe. YUM! Hey, that’s a great idea (if I do say so myself) – I’m going to do that next time!

Either way, these are a fun and yummy side dish or snack. I didn’t measure anything when I made them but I guesstimated the amounts so use your judgment. You just want a thin batter. Add whatever spices you like. Move over onion rings – my Fried Onion Pancakes might just become your new favorite side dish. Enjoy! 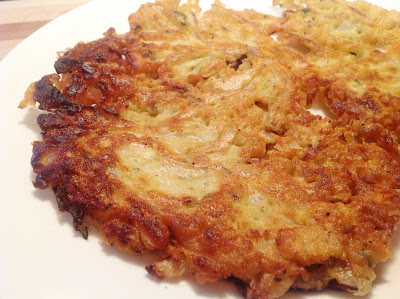 If you are making large pancakes, fill the smaller skillet with battered onions. If you are making smaller pancakes, add the onions in the large skillet in 3 or 4 small circles at a time. Let the onions cook until the bottoms are browned and crispy, about 4 minutes. Flip and cook until the other side is browned and crispy, about another 3 minutes. Transfer to a paper-towel lined plate to drain. Sprinkle with salt while they are hot.

Continue making pancakes until you have used all the battered onions. Serve while hot. If you can’t serve immediately, keep the pancakes in a single layer on a wire cooling rack atop a baking sheet in a 200 degree oven. 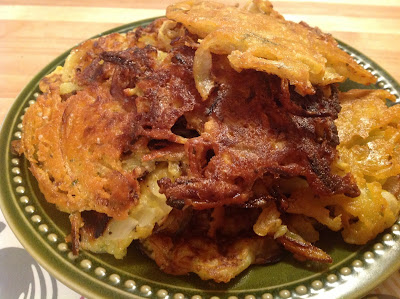