One thing, however, always seemed to be missing from Manhattan veg eateries: outdoor dining. Whenever Tom and I would walk through the city, we would look longingly at all the diners eating along the sidewalks. Many of them had their dogs sitting with them as well. We weren’t jealous of their non-vegan food but of how many choices of restaurants with outdoor seating they had. Sure, we could have gone to most of these places and found something vegan on the menu but Tom and I prefer to give our business to restaurants with a compassionate mission and that meant no sidewalk cafe-style seating until now.

Gobo, located on the Upper East Side, now has outdoor seating. They even let Benny sit with us. And we’re not just talking one tiny table in front of the restaurant. The entire side of the building has two rows of round tables separated by tall plants and shaded by umbrellas. There is plenty of room to sit comfortably and enjoy your meal. Even with a dog on your lap. 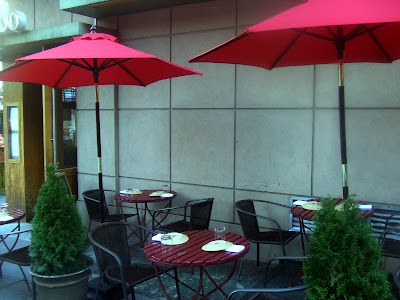 Gobo is a beautiful restaurant. The large windows in front open to make some threshold seating. Inside is a spacious and calm atmosphere. The walls are a soft, muted hue of green with hangings of large pieces of decorative wood. Music adds ambience at a perfect volume for conversation. It looked so pretty, I almost wanted to eat inside…almost.

According to their web site, Gobo is “where spirited vegetarian dining awakens the five senses for each guest. Rooted in Zen compassion, gobo is founded on the belief that delicious food & beverages using wholesome, non-meat ingredients will nourish both your body & mind.” They have an extensive menu and wine list that spans the globe. They offer prix-fixe meals, Sunday brunch and an organic juice bar. Their “world vegetarian cuisine” is offered in both small and large plates. Only a couple of items are not vegan and this is clearly marked on the menu. 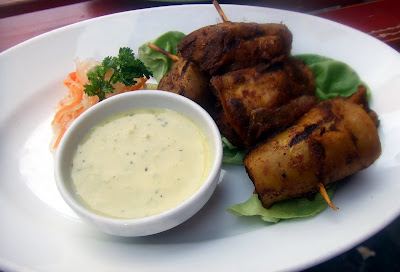 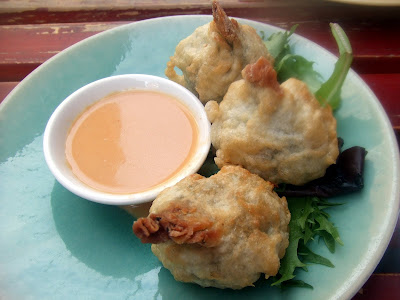 For the entrees, Tom quickly decided on the sesame protein braised in sweet and sour sauce. It was served with fresh, steamed broccoli. Sweet and sour sauce is often cloyingly sweet and gummy but Tom said this was “the lightest sweet and sour sauce” he ever tasted. The soy protein was tender, the pineapple chunks were bright and refreshing and the broccoli was cooked just right. On the side, we got a bowl of delicious brown rice that was laced with tiny black-eyed peas. The plate was so alive with color. 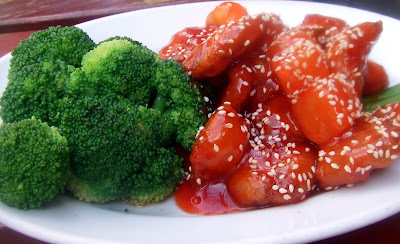 Unlike Tom, I was having trouble choosing an entree because so many things sounded so good. Our server, Jonathan, who was friendly, courteous and helpful, came to my rescue. I asked him to help me decide between two dishes and he suggested I try the smoked Beijing-style seitan with Chinese broccoli. Jonathan described it as a healthy dish without too much sauce. That sounded perfect for me. When my entree came, it looked so impressive but it was even more than what met the eye. Underneath the smokey-flavored, crispy seitan were layers of fresh, steamed Chinese vegetables, each one covering the next layer like gifts to be unwrapped – greens, broccoli, oyster mushrooms and yams. I was in heaven. After that dish, I would take Jonathan’s advice about anything. I also ordered the dancing leaves green tea which came to the table in a small tea pot. It was one of the most flavorful green teas I’ve ever had. 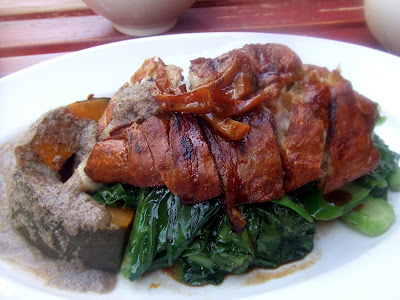 Last but not least came dessert but Tom was on his own for that round. He had the multi-layered chocolate cake dusted with green tea. It was a huge slab of cake and could easily feed 2 people. The cake was a perfect balance of moist richness and a gentle cocoa flavor. Not too sweet but definitely indulgent. The green tea dusting made the cake especially pretty. 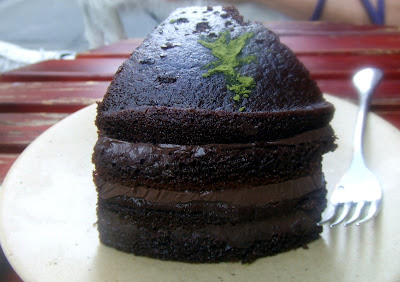 All in all, everything we had at Gobo was exactly as they described, “food for the five senses.” Beautiful presentations, simple yet creative dishes, luxurious textures, and perfect balances of flavors. As we walked back from dinner, we passed all the people sitting along the sidewalk at all the restaurants up Third Avenue and for the first time, Tom and I were not jealous. Our only problem is waiting for the weekend to have an outdoor brunch at Gobo. 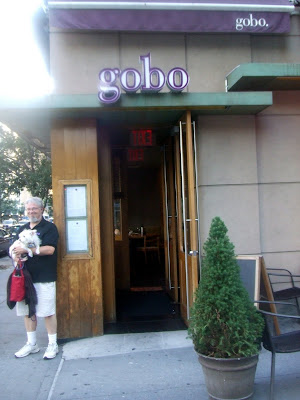