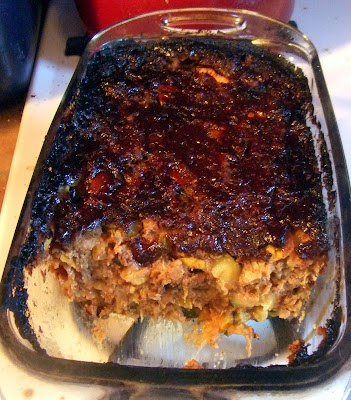 A self-confessed food television addict, most of the shows I watch have nothing to do with vegan cooking. They don’t have much to do with healthy eating either. Still, I tune in to Dinner: Impossible, Top Chef, Hell’s Kitchen, Iron Chef and one of my favorite shows, Throwdown with Bobby Flay. I love to watch Bobby Flay challenge people who excel at one particular dish to a cooking throwdown. It’s hard to know who to root for. On the one hand, I like Bobby and want him to win but on the other hand, it’s nice to see ordinary people get their moment of victory over a Master. Even Bobby acts like he wants his opponents to win! He is gracious and humble and that makes him even more likeable. It doesn’t hurt that he’s married to Stephanie March who plays my favorite Assistant D.A. on Law & Order: SVU. They even filmed an episode of Boy Meets Grill together where Stephanie taught Bobby her version of meatloaf.

My favorite Iron Chef episodes are the ones where Bobby competes. His signature southwestern dishes always make my mouth water. No matter what he prepares, you know it’s going to be colorful and full of flavor. Bobby combines multitudes of herbs and spices to create sauces and glazes in the most spectacular colors. The flavor just jumps off the screen.

I never got the chance to visit any of Bobby Flay’s restaurants before I became vegan and now I know I never will. Sadly, his new burger joints, Bobby’s Burger Palace, do not even offer a veggie burger! Still, when I saw a recipe in the February/March 2009 issue of Food Network Magazine for Bobby’s lighter version of meatloaf (it uses ground turkey), I knew it had vegan potential and set about making my own version of it. I guess you could say I challenged Bobby to a vegan meatloaf throwdown without his knowing about it 🙂

I thought about making it with the usual suspects: beans, nuts, tofu, but I wanted it to really taste like the meatloaf I used to make before I went veg. It’s rare that I ever use processed mock meats but one product I like is Lightlife’s Gimme Lean. It is vegan and comes in both ground beef and sausage style. One tube is equivalent to 1 lb. of meat. Each serving contains 7 grams of protein and absolutely no fat. The package also says, “We do not use soybeans that were produced using biotechnology.” Gimme Lean is low in calories and that makes my diet happy. Using the Gimme Lean Ground Beef Style in the recipe made for a delicious “meat” loaf reminiscent of the classic style but my husband, Tom, said this version was even better. Friends who have tried my recipe said they loved it. It tastes even better the next day when leftovers find their way into sandwiches. Filled with veggies, low in calories and cruelty-free, this version is a Vegan Throwdown winner!

3. Gently press the mixture into a loaf pan. Whisk the remaining ¼-cup ketchup, ¼-cup balsamic vinegar and ¼ tsp. red pepper flakes in a small bowl; brush the mixture over the entire loaf. Bake for about 45 min. Take out of oven and let sit for about 10 minutes to set before slicing. Enjoy! 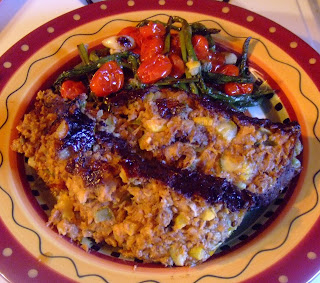