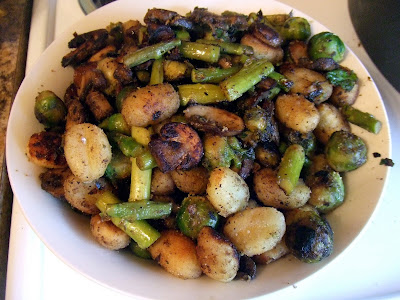 I knew this would happen sooner or later. When I named the group of recipes “Extreme Vegan Makeover,” I knew that eventually I would want to post a recipe that wasn’t a veganized version of some other recipe. Then what would I do? I know! Just post the recipe and some pictures that make your mouth water. Maybe throw in a little history or a story to distract the reader from the fact that it isn’t really a makeover. Or most likely, no one would really care.

So this isn’t really a Vegan makeover but it is a really delicious recipe that is easy to make and very satisfying. It is great for warm weather because it is a one-pot meal and cooks really fast. You can use fresh or frozen ingredients with no extra work involved.

Be sure when you buy the gnocchi that it is vegan. Some varieties (like Trader Joe’s) have egg or dairy in them but I found a brand at Morton Williams that is vegan and doesn’t need to be refrigerated.

In case you still need a story or some trivia, I will tell you what I learned on Wikipedia. If you don’t, feel free to skip to the recipe. “The word gnocchi means “lumps”, and may derive from nocchio, a knot in the wood, or from nocca (knuckle). It has been a traditional Italian pasta type of probably Middle Eastern origin since Roman times.” Originally, gnocchi was made from a semolina dough with eggs. Potatoes were not used until their introduction to Europe in the 16th century. Interesting, huh?

Ok, now on to the recipe:

Preheat large sauté pan with medium heat. Add 1 Tbs. oil to pan. When the oil is hot, add the gnocchi to the pan, being sure to keep them all separated. Let cook about 3-4 minutes on each side until browned and crispy. Remove from pan and set aside.

Add 1 Tbs. oil to pan and add Brussel sprouts. If they are large Brussel sprouts, halve or quarter them into bite-sized pieces. Cook about 4 minutes on each side until browned and softened. If using frozen Brussel sprouts, they may need to cook longer on a lower temperature to be sure they are cooked through to the middle but you can add them directly to the pan with no need to defrost them. Remove from pan and set aside.

Add last Tbs. of oil to pan and add mushrooms, garlic, thyme, paprika, cumin, salt and pepper. Cook about 5-6 minutes until mushrooms are soft and creamy. Meanwhile, if you are using fresh asparagus, steam them for a few minutes to soften them. I do it by putting them in a covered dish with a bit of water and popping them in the microwave for 3 minutes but you can do it the old fashioned way too. If you are using a frozen veggie, you can add it directly to the pan or defrost it first, depending on the water content (for example, I would add frozen asparagus directly but I would defrost spinach). When the asparagus is steamed, let cool to the touch and cut them into pieces, keeping the tips on the side. Add the pieces to the pan with the mushrooms and stir.

Add the gnocchi and the Brussel sprouts back to the pan and let everything heat through. Garnish with the asparagus tips and parsley, if you want.

That’s it. I like gnocchi so much better this way than boiled. It satisfies both my desire for crispy potatoes and my husband’s love of pasta. And Tom is still surprised that he loves Brussel sprouts!

By the way, in cooler weather, roasting the Brussel sprouts and the asparagus in the oven is even more delicious. 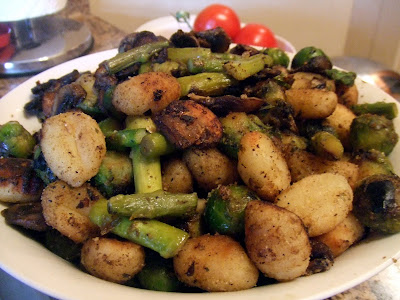