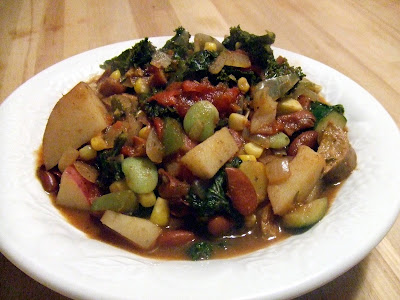 In this season of giving thanks, Tom and I received a gift yesterday – a nicer place to stay that’s 50 miles closer to the city. We also got to buy some groceries and I was craving fresh vegetables something bad!! Usually we eat a very healthy Vegan diet filled with dark greens and tons of fresh vegetables but that hasn’t been possible lately. So when we got the opportunity to buy some food, we headed straight for the produce section of the supermarket and filled our cart with the all the beautiful colors of the season’s bounty.

It’s also been freezing where we are and we have both been sick with horrible colds so we needed to eat something hot that would make us feel all warm inside. The answer was a vegetable stew that was hot, hearty and healthy.

Onions, bell peppers, zucchini, yellow squash, red potatoes, celery, red beans, diced tomatoes and a bunch of kale. Instead of corn, I used frozen succotash which added peas and lima beans for an extra healthy boost. Two vegan sausage links added an indulgent touch. A dollop of Vegan sour cream on top and we had a dinner that was instantly healing. 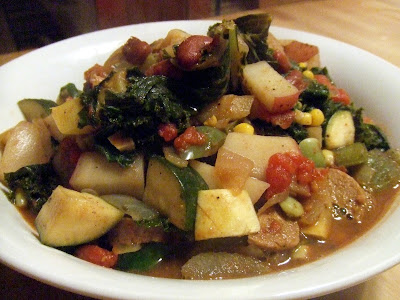 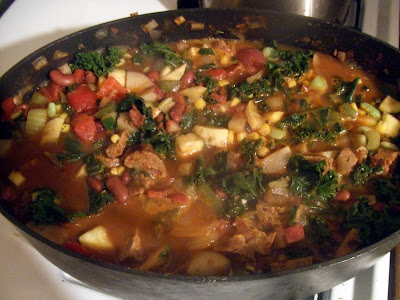 Directions:
Heat a deep pot and spray with canola oil. Add the Vegan sausage links and cook until they are browned on all sides. Remove from pot and set aside.  I wait until the end to slice them because if I don’t, we’ll munch on them until none is left 🙂

Add onions to the pot and cook for about 5 minutes until softened. Add bell pepper, potatoes, zucchini, squash, celery and garlic and allow to cook for about 8 minutes until vegetables are softened. Add the red kidney beans, the diced tomatoes and the broth (add more or less broth depending how thick you like your stew. Add the spices (including the hot sauce depending how hot you like it) and allow to cook until the liquid comes to a boil.

Lower the heat, add the kale and let the stew simmer for about 30 minutes until the potatoes are cooked. Add the cup of succotash and the sausage slices to the pot, mix and let it warm through.

Serve in a bowl and add a dollop of Vegan sour cream, if desired. 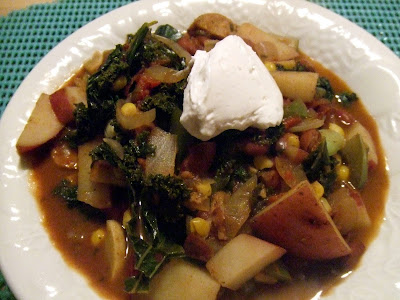