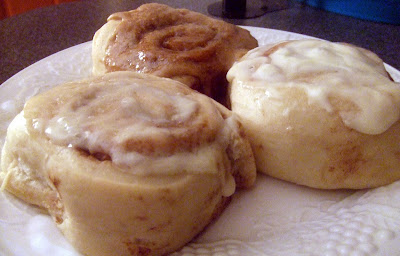 Recently, I purchased and redeemed a gift certificate from Cinnaholic Gourmet Cinnamon Rolls and OMG! We are talking major deliciousness here.

Cinnaholic, one of the first all-vegan bakeries in the San Francisco Bay area, is owned by Shannon Michelle and Florian Radke. The vegan couple planned to open a bakery that offered many different goodies but when everyone raved about their cinnamon rolls, they decided to focus on one thing and make it spectacular. And that they did. Cinnaholic opened its doors in Berkeley on July 17, 2010 and by 4pm that afternoon, they were sold out!

There is also a toppings bar with 28 varieties including fruits, chocolate chips, jams, marshmellows, cookies, nuts and seasonal goodies such as candy canes and gingersnap cookies.

Cinnaholic also makes specialty pie rolls in 6 fruit flavors with brown sugar and oatmeal crumble toppings, cookies, muffins, brownies, and Baby Buns – a mini version of the cinnamon rolls. During November, a portion of the proceeds from the Baby Buns went to Farm Sanctuary’s Adopt-a-Turkey program. They also make Cinnacakes – an original invention of cinnamon rolls put together with frostings and toppings to create a very unique cake experience.

If you live in or near Berkeley, you can experience this Cinnaholic magic in person. You can walk in, revel in the punk rock meets pin-up style environment, exercise your brain with all the choices of rolls, frostings and toppings, grab a cup of coffee to go with your personal cinnamon roll creation and enjoy the sunny weather. But what if, like me, you live on the East Coast? Or what if you want to share the Cinnaholic experience with a friend who lives in Nebraska?

Don’t despair because you can order some of Cinnaholic’s items online. At this point (remember, they are still a very new company and continuing to evolve), you can order a package of 12 cinnamon rolls  with containers of “Old Skool” frosting ($50) and 10 of their frosting flavors for 50 cents a shot. Cinnaholic bakes and ships the rolls on Monday. They say you will receive them within 2-3 days (shipping is $15 per dozen rolls) but my order came the very next day! You just reheat them, put the frosting on top and eat ’em up or you can freeze the rest (if you can’t eat all 12 in one sitting).

At first I thought it sounded a bit pricey for cinnamon rolls (especially since I’m not a pastry eater; I bought these for Tom) but once we heated them up in the oven and tasted the different frostings, I was a believer. The rolls are fresh, light and delicious. They taste like they just came out of the oven (well, they did because we heated them up in the oven but you know what I mean) and the frostings we tasted were all delicious – not too sweet and very flavorful. We ordered pumpkin spice, hazelnut, Irish creme, maple, coffee and “Old Skool” was included. Hazelnut is my favorite and maple is Tom’s.

All of Cinnaholic’s products are 100% vegan, made with non-hydrogenated oils and sweetened with evaporated cane juice. Cinnaholic has been featured in many publications including twice in VegNews (there is an interview with Shannon Michelle in the September/October 2010 issue).

Cinnaholic is located at 2132 Oxford Street, Berkeley, California directly across from the UC Berkeley campus and close to Downtown Berkeley BART. Open 8am to 7pm Tuesday – Friday and 9am – 7 pm on weekends. Closed Mondays. Phone: 1-510-647-8684  Website: http://www.cinnaholic.com/