By Rhea on December 22, 2010 in Appetizers, Snacks & Starters, Recipes 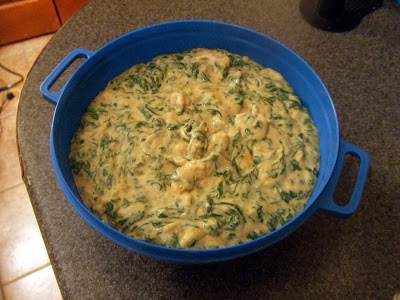 It happened right before I became Vegan. Literally, just a few months before I committed to a cruelty-free lifestyle. I discovered that I loved spinach artichoke dip.

Tom and I traveled back to Wilmington, North Carolina – the place we eloped to – for our one-year wedding anniversary in 2008. We had become vegetarians the previous summer and in October we were returning to the South but with no BBQ on our itinerary. I did a lot of research before the trip, looking for places where we could shop and eat.

For shopping, we found two wonderful stores: Lovey’s Natural Foods & Cafe and Tidal Creek Cooperative Market. These two places had everything a vegetarian or Vegan could want. Restaurants were a bit more of a challenge but we managed to find a handful of places: Flaming Amy’s Burrito Barn not only offered Mexican vegetarian dishes but they made it clear on the menu that the vegetables were cooked on a separate grill. Double Happiness Restaurant served Chinese food with mock meat and veg dishes. Their menu clearly marked which dishes were vegetarian. The Trolly Stop had tofu hot dogs.

And then there was Fat Tony’s Italian Pub…here we found a dish that I had never had before: Pizza Chip Nachos which are “crisp nachos prepared the Italian way- low fat, baked and then topped with spinach, artichoke hearts and garlic in a rich cheese sauce.” It was incredible and I think we ate it almost every day. I had never had spinach artichoke dip before but I was in love with it from that first day on.

The problem was that I knew I would be transitioning to Vegan very soon. In fact, as we drove from New York to North Carolina, I read aloud from Dr. Neal Barnard’s book “Breaking the Food Seduction.” I continued to read that book and other resources on that anniversary trip. As I learned that the dairy industry was the most cruel of all, I knew that cheese and I had to get divorced.

So we came back home to New York and became Vegan. Woo hoo! It’s the greatest thing I’ve ever done in my life. But I’m not going to lie – sometimes I have cravings for things I used to eat, especially when I see or smell them. For instance, Tom and I like to go to Curly’s Vegetarian Lunch in Manhattan where we get delicious Vegan food. Next door is a pizza place that specializes in spinach artichoke pizza. The line is always out the door and down the block and it looks really good – just not good enough to engage in the cruelty that is cheese. NOTHING TASTES THAT GOOD! That just meant that I needed to come up with a Vegan version of spinach artichoke dip so I did.

The version I like best is similar to the one at Fat Tony’s – all mozzarella flavored. The one shown here in the pictures uses cheddar flavored Daiya. Eating food that requires the rape, torture and murder of animals is NOT a personal choice. Whether you want mozzarella or cheddar flavored Vegan cheese – that is completely up to you. 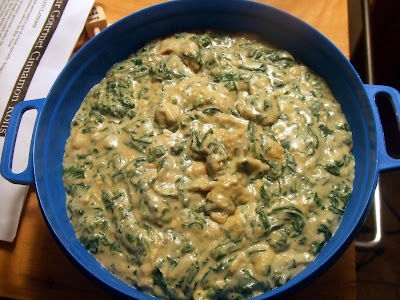 In a large saucepan over medium heat, melt the spread. Add the onion, garlic, and 1/2 tsp. salt and cook about 3 minutes until the onion is softened. Add the flour and cook about 1 minute, stirring. Add the milk and whisk until thickened, about 1-2 minutes. Remove from the heat.

Stir in the Worcestershire sauce, nutritional yeast and sour cream. Return the pot to medium heat. Add the spinach, artichokes and the Vegan cheese and stir until the cheese melts and the dip is thoroughly heated. 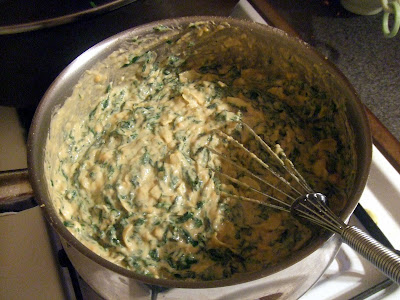 If the sauce seems to thin, add more cheese. If it seems too thick, add more milk and/or sour cream. 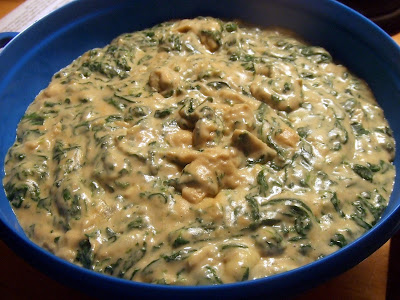 Serve with crackers or tortilla chips. Spread it on a pizza crust. Thin it out a little and use it for mac n’cheeze. 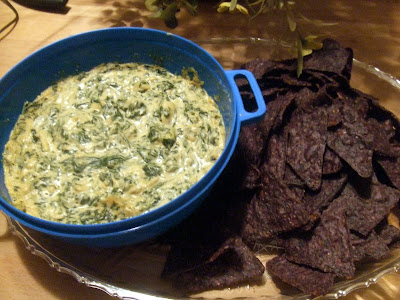