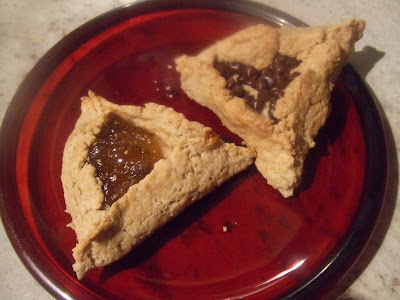 It’s Purim and even though I am baking-challenged, I decided to try and make Hamentashen. And not just any Hamentashen: Vegan and gluten-free Hamentashen.

Purim has always been my favorite Jewish holiday. It’s one of the few happy holidays and as I recall, the only one where you get to sit in the synagogue and make noise – stamp your feet and play with graggers (noisemakers). 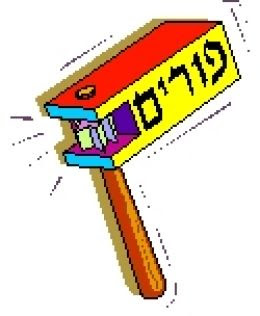 When I was a little girl, I used to love when Purim came along. Not just because I got to be loud in shul but because Purim is like the Jewish version of Halloween. In school, we would dress up in costumes and act out the Book of Esther (Megillah) and how she saved the Jews from persecution. 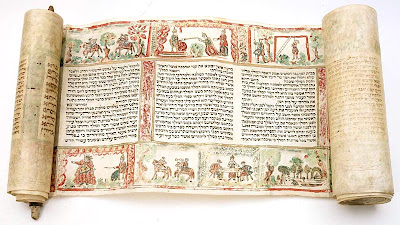 I always wanted to be Queen Esther but for some reason, the teachers always chose a blond girl for that. Maybe because the graggers we had showed Esther as a blond and Vashti as a brunette, I don’t know. The brunettes ended up being Queen Vashti, their dark tresses flowing as they were beheaded. Hmph!

Telling us that Purim was the Jewish version of Halloween turned out to be a big mistake on the teacher’s part, however. Imagine my embarassment and confusion as I rang people’s doorbells in our South Bronx apartment building, dressed in costume, asking for treats….IN MARCH!!!! I recall neighbors asking me why I was “trick-or-treating” in March instead of October and their befuddled looks as I tried to explain Purim to them. They probably suggested to my parents that I get some help. 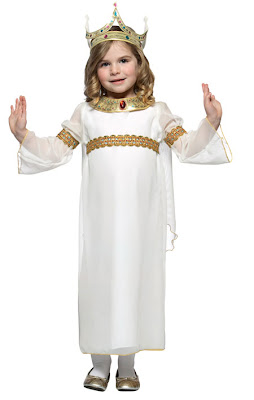 As I got older, I not only stopped “trick-or-treating” in March but I understood the Story of Esther from a more feminist perspective. We were always taught that Queen Vashti was bad, that she was wrong, that she was defiant. In actuality, she was a feminist, a strong woman who refused to be told what to do, who refused to let her husband pass her around to his friends as entertainment and she died for it. Vashti became my brunette hero.

And while Esther did save the Jews, she did it using her feminine wiles. Isn’t that what we criticize PETA for – using women as sexualized objects to help save animals? She’s still a hero but it’s a little more complicated now; a little more confusing than “trick-or-treating” in March.

Anyway, I read a great article on Shalom Veg, a web-based group for Jewish vegetarians, vegans and animal rights advocates, called “Purim – What are We Blotting Out?” The article states, “We are commanded on Purim to try to wipe away evil in our world. But we are also told that we must first hear, recognize and remember the evil. It is up to us to make the conscious choice to pay attention and do what we know is right, to be kind to each other, and do our best to bring healing instead of pain to the world.”

What a wonderful message. And it just so happens that this year Purim falls on the same day as Meatout Day and the first day of Spring. What a great way to celebrate Purim…a new beginning by going Vegan!

Back to the Hamentashen. Anyone who knows me knows that I don’t like sweets. I was making the Hamentashen for Tom and just to see if I could but what about me? Then I thought, why can’t I make savory Hamentashen? They would be like calzones but smaller. So I adapted the recipe by removing the sugar and adding some Italian spices. I made a sauteed mushroom and vegan feta cheese mixture that I love. Then I thought, why not pizza? After all, I am half-Italian so I whipped up a super-fast marinara sauce and got out my Daiya mozzarella cheese. This way Tom and I were both happy.

Since I’m so bad with dough, my Hamentanshen didn’t come out looking so great.

In fact, if Haman’s hat had looked like my Hamentashen, he would have been laughed at and run out of Persia before he even got a chance to start trouble. But they tasted delicious and that’s what really matters, right? Right.

Here are the recipes for both the sweet and the savory Hamentashen and the fillings. Make either one you like or both. Just don’t get dressed up in costume and go door-to-door unless you live in a very observant Jewish neighborhood 🙂

Sweet Hamentashen
Note: I have updated and improved this recipe. Please see the new recipe posted on 3/8/12. Don’t use this one.

Mix the dry ingredients into a large bowl. Add in the margarine and mix until flour is clumpy. Add water slowly, mixing, until the dough comes together.

Directions
Heat oil in a skillet over medium heat. Add onions and let cook about 3 minutes. Add garlic and mushrooms. Let cook until mushrooms are brown and moist, about 6 minutes. Add spices and worscestershire sauce. Stir and let cook a few minutes more. Remove from heat and put mushrooms in a bowl. Add vegan feta cheese and mix. 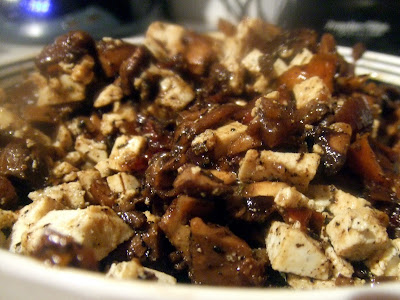 See my recipe at http://thevword.net/2010/08/extreme-vegan-makeover-noodle-free/ or to make it super simple: open an 8 oz. can of tomato sauce, add some pinches of oregano, basil, crushed red pepper, salt and pepper. Mix and heat for a few minutes.

Mix the dry ingredients into a large bowl. Add in the margarine and mix until flour is clumpy. In a separate bowl or mug, mix the chickpea flour with the water until it becomes a paste. Add the milk to this mixture. Add the flour/milk paste slowly, mixing, until the dough comes together.

Have extra marinara sauce and/or gravy for dipping.