By Rhea on June 6, 2012 in Burgers, Sandwiches and Tortillas, Recipes, Tofu/Tempeh Dishes 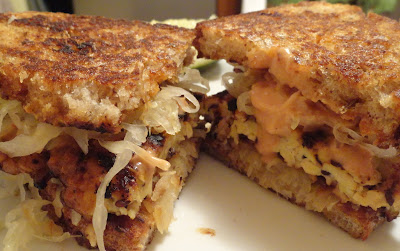 So this is one of those recipes that I’m veganizing without ever having had it in its original form. If you asked me what a non-vegan Reuben sandwich contains, I couldn’t tell you one specific ingredient other than sauerkraut. I never did like cold cuts (and WOW, how that term, “cold cuts,” makes so much sense now in a creepy and perverse way) so I never ate these types of sandwiches.

Maybe once a month, Tom and I go out for vegan sandwiches and he always orders a Tempeh Reuben. I’m not the biggest tempeh fan but when it’s marinated and grilled, it’s delicious. I am a huge fan of Russian Dressing, the spicier the better, and I love sauerkraut. Add all that to toasted rye bread and I’m a happy girl. 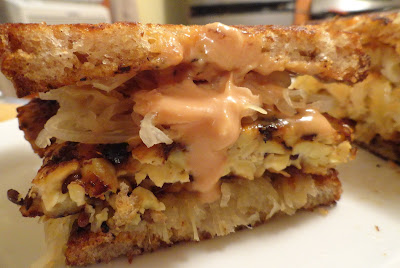 Usually Tom orders a Tempeh Reuben, I order a different sandwich and then we split them so we each have both kinds. I know I’m not supposed to eat rye bread because it has gluten but for me, this is worth cheating on once in a while. (Note: Do NOT cheat if you have a gluten allergy or Celiac disease!!)

I wanted to be able to make my own Tempeh Reubens so I bought a bottle of Bubbie’s Sauerkraut. It sat on the shelf for over a month and this week, Tom came back from the store with a loaf of rye bread. I think he was trying to tell me something 🙂 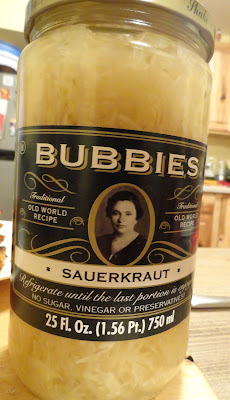 This recipe makes 2 very filling sandwiches but enough marinade and Russian dressing for more than that so if you are making 4 sandwiches, you only need to double the amount of tempeh and sauerkraut. I like my Russian Dressing spicy so I added some hot sauce. That is completely optional; you can make it more or less spicy depending on how you like it.

I also like my bread very toasty so I butter it and brown it on both sides. I don’t like when the outside of a sandwich is toasty but the inside is soggy. You can brown the bread according to the recipe or you can just pop it in the toaster. Again, that’s up to you. And if you use gluten-free bread, the rest of the recipe is entirely gluten-free. Some people like vegan cheese on their Tempeh Reubens but I think that the cheese just covers the flavors of the other ingredients so I don’t add it. Once again, up to you.

I really wanted to name this sandwich a Tempeh Rachel since Rachel is my Hebrew name. However, I found out that the difference between a Reuben and a Rachel is not which meat you use but whether you use sauerkraut or cole slaw. So here is my vegan version of a Tempeh Reuben sandwich. Swap out the sauerkraut for cole slaw and it’s a Tempeh Rachel. Either way, it’s crispy, flavorful, spicy and delicious. And not a “cold cut” in sight. Enjoy! 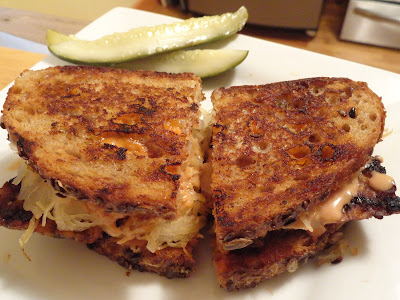 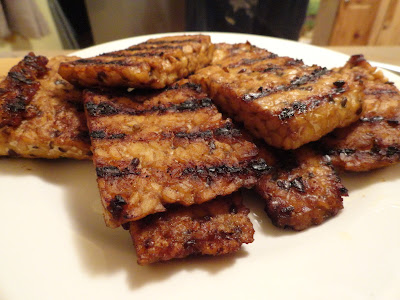 For the Russian Dressing:

Prepare the marinade by combining all the ingredients in a bowl or Tupperware container. Cut the tempeh into 8 pieces. I do this by cutting the rectangular block in half so I have 2 squares. Then I slice each square like a bagel so that it’s turned into 4 thin squares. Then cut each square in half so you have 8 thin rectangular pieces. Add the tempeh to the marinade, cover and let sit for at least one hour.

Meanwhile, prepare the Russian Dressing by combining all the ingredients in a bowl and mixing well. Refrigerate until ready to use.

Heat a grill pan over medium-high heat. Add the oil and grill the tempeh on both sides until browned and softened, about 4 minutes per side. Remove from the grill pan and set aside.

Heat a griddle or skillet over medium-high heat. Coat one side of each slice of bread with vegan butter. Cook the bread, buttered side down, on the griddle until golden brown. Remove from the griddle but leave the griddle on the heat. Butter the uncooked side of the bread. 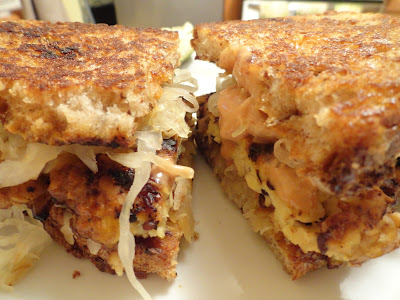