By Rhea on October 17, 2012 in Entrees, Recipes, Tofu/Tempeh Dishes 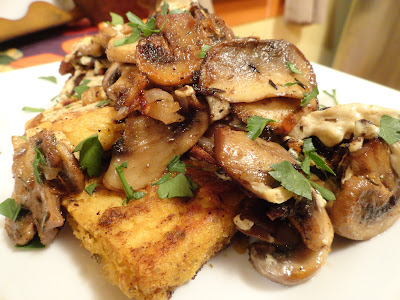 The “V” Word continues its celebration of VeganMoFo, the vegan month of food, with its theme “If TV Celebrity Chefs Went Vegan.” Today’s entry focuses on Paula Deen.
Paula Deen is one of those people who brings out strong emotions and opinions in people, myself included. When I first watched Paula’s shows on TV, I liked her. She’s funny, she’s outrageous, she cooks food that makes you say, “What? Are you kidding?” Her oldest shows are my favorites – back when Paula was showing people how to make old-fashioned, low-country dishes that didn’t cost a lot of money. They aren’t my favorites because of the food. Honestly, I don’t like most of what Paula cooks and would never dream of using a can of condensed cream-of-anything soup. I liked the episodes because of her personality which was warm, friendly and down-to-earth. 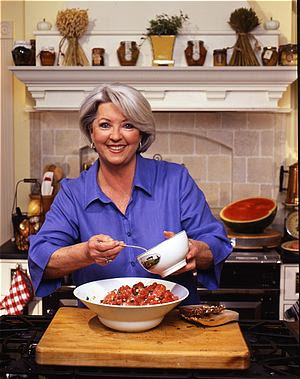 Over time, her personality has changed with her stardom and we all know about the recent controversies surrounding her diabetes and her business deals with drug companies. Not cool. But on the other hand, I struggle a bit with these issues myself. After all, I suffer from autoimmune disorders and I write about that here on the blog but I often wonder how much I have to disclose to my readers about what I’m going through. Of course, I’m not promoting unhealthy food or arranging deals with pharmaceutical companies. Still, it’s a challenge for me to talk about all the health benefits I got by becoming a whole-foods, gluten-free vegan while I’m still battling a disease that often debilitates me. So I guess I empathize a bit about sharing private issues with the public and I sincerely hope that Paula continues her journey towards a healthier life.
One of the things I often talk about is how much I admire people who rise up out of adversity and overcome obstacles. I like to learn people’s back stories and see where they came from because everyone has a story. When I read Paula Deen’s memoir, It Ain’t All About the Cookin’, I was instantly impressed by her. The woman had a rough life. 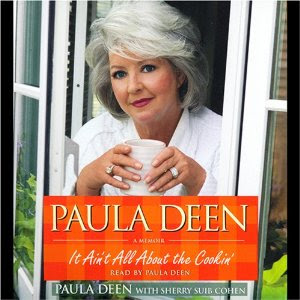 Her parents died before she was 23, her marriage ended in divorce, and she suffered from panic attacks and agoraphobia (something my own mother suffered from). Paula’s grandmother taught her how to cook because the kitchen was the only place she felt safe. Only a person who has ever had a panic attack can understand that kind of pain and terror but she battled it on her own and overcame it. Good for her!
Later, when she was divorced from her husband, Jimmy Deen (not the sausage-maker), she had 2 boys and $200 to her name. Paula worked many jobs before starting a catering service, The Bag Lady, where she made bag lunches at home and had her boys deliver them to businesses and offices. Her sons, Jamie and Bobby, who are now rich and famous from the family legacy, didn’t even want to be part of the business back then. When the catering service outgrew her home kitchen, Paula’s aunt and uncle helped her open her first restaurant and The Lady and Sons was born. The restaurant is now so popular, there is a waiting list that is years long. Paula’s rise from a single-mother in poverty struggling with anxiety to a business success who is outgoing and family-oriented is very inspiring to me. 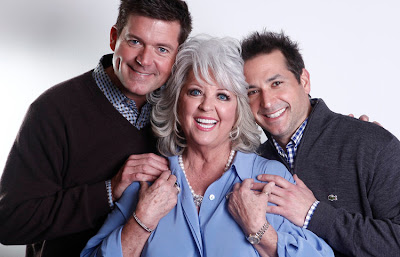 So yes, I have ambivalent feelings about Paula Deen but that’s ok. If you are a consistent follower of my blog or if you know me at all, you know that I am all about not being judgmental (or trying hard not to be). I don’t see the world in black and white, all good or all bad. Life and people are just not that simple. My ambivalent feelings come up with most of the celebrity chefs I watch on TV. How could they not? They all do things I don’t morally agree with – exploit and eat animals, endorse cruel products, etc.
Also, if you watch as much food TV as I do, you know that most TV chefs use just as much butter and deep-frying techniques as Paula Deen does. She just jokes about it more and has become famous for it so I don’t think it’s fair to judge her harsher than other chefs for that. It’s not healthy for anyone to cook that way.
So yes, I like to watch Paula Deen on TV. She makes me laugh and like every other TV personality, sometimes she rubs me the wrong way. Once in a while she even cooks something that makes me drool.  Before I became vegan, I had one of her cookbooks and there was only one recipe in it I liked. It’s the same recipe that whenever I watched her make it on TV (and I’ve seen that episode a gazillion times), I wanted it so badly – her Chicken Georgia. But I never made it. So now, I thought, why not make it vegan and healthy? 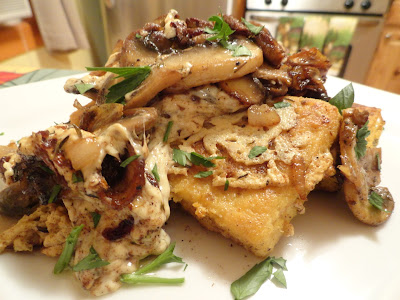 Listen to this: slices of tofu pan-fried until they are crispy on the outside but still juicy inside, mushrooms sauteed with shallots and thyme in a little vegan butter until they are browned and savory and then top it all with melted vegan cheese. OMG! It’s so incredibly delicious.
When Tom took his first taste, he said he would be happy if I made him “nothing else, everyday, for the rest of his life.” Nothing ambivalent about that. No matter how you feel about Ms. Deen, my Tofu Georgia will win your heart over, y’all. Enjoy!
Tofu Georgia 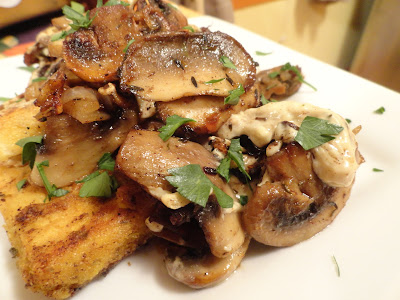 2 blocks extra-firm tofu, pressed and drained
1 cup chickpea flour
2 tsp. garlic powder
2 tsp. cumin
2 tsp. dried oregano
2 tsp. Kosher salt
1 tsp. black pepper
1 cup non-dairy milk
2 Tbs. extra-virgin olive oil
2 Tbs. vegan butter
16 oz. fresh mushrooms, sliced
2 shallots, minced
2 tsp. dried thyme
Kosher salt and black pepper to taste
1 cup vegan mozzarella shreds
¼ cup water
Fresh parsley, chopped, for garnish
Cut the tofu blocks in half width-wise and then cut each half into 3 slices. In a shallow bowl or dish, mix the flour with the spices. In another shallow bowl, pour the milk.
In a large skillet, preferably one with a lid, heat the oil over medium-high heat. Using one hand, pick up each slice of tofu and place it in the flour. Coat the tofu on both sides. Shake off the excess flour and place the tofu in the milk. Coat the tofu on both sides with the milk, then pass it back through the flour again. Place the coated tofu slice on a plate and repeat the process with the other slices.
Cook the tofu slices in the skillet until golden-brown, about 4-5 minutes per side. It will probably need to be done in 2 batches. Transfer the cooked tofu to a plate and cover with foil to keep warm.
In the same skillet, melt the butter. Add the mushrooms, shallots and thyme to the skillet and cook until the mushrooms are browned, about 8 minutes. When the mushrooms are browned, add the salt and pepper. Sprinkle the cheese shreds over the mushrooms. Add ¼ cup of water to the skillet and put the lid on. This will create steam which will melt the cheese. It should only take about 3 – 4 minutes. Don’t let the cheese burn. When the cheese had melted, turn off the heat.
Serve the tofu on a platter or 3 slices on individual plates. Top the tofu with the mushrooms and melted cheese. Garnish with parsley and serve immediately. 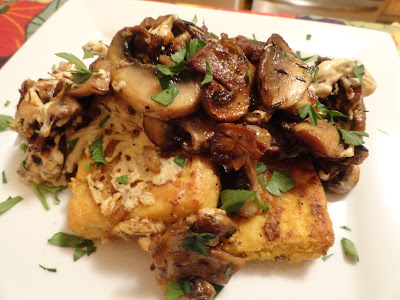