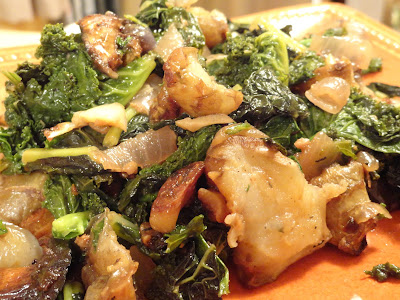 Since I became vegan, I have tasted so many new foods. It’s amazing how we can get into ruts and eat the same things over and over again. And I used to say that I loved vegetables!! I did – the same half a dozen veggies that I ate repeatedly. Let’s face it: new foods can be scary, both cooking them and eating them. That’s why I came up with a few rules that I imposed upon myself.
First rule: I cannot say I don’t like a food until I have tried it several times and prepared in several different ways. In the beginning, I didn’t like anything. I didn’t like nut milks, tofu, tempeh, etc. But I kept trying them and today I love them all. It takes time to get used to new foods especially when you have been eating/drinking the non-vegan variety of them for most of your life. So try those foods several times until you get used to the taste. Try them out at vegan restaurants where they are cooked by the experts. Try different recipes or cooking techniques. Give them a fair chance!
Second rule: I make sure I try new foods all the time. It’s easy to keep eating kale, broccoli, potatoes and the familiar foods. Even foods I had never eaten before, like kale, become familiar after awhile. When shopping, I try to buy something new or prepare a familiar ingredient in a new way. When you expand the variety of foods and cooking techniques, it’s harder to get bored.
Third rule: When you do buy a new vegetable and you’re not sure what to do with it – roast it! Everything tastes delicious roasted. Roasting brings out the sweetness and deep flavors of foods, especially root vegetables. Broccoli, asparagus, beets, even tomatoes, taste completely different when you roast them.
Fourth rule: Taste the actual food. Don’t bury the new veggie in different spices or sauces or (gasp!) vegan cheese. Don’t cover up the natural flavor of the vegetable. If you cover it with all these added ingredients, you aren’t really tasting the vegetable. So at least for the first time, keep it simple with salt, pepper, some garlic and oil. Appreciate the natural deliciousness of the food.
Fifth rule: When you do experience something new and delicious, share it with the world. So that’s what I’m doing here.
This was the first time I ever tasted Jerusalem artichokes. I wanted to try them ever since I heard that they tasted like a cross between potatoes and artichokes, two veggies I love. Following my own rule, I prepared them by simply roasting them. They are absolutely delicious. The Jerusalem artichokes, or sunchokes as they are also known, have the texture of potatoes and the taste of artichokes. They are a new favorite of mine. 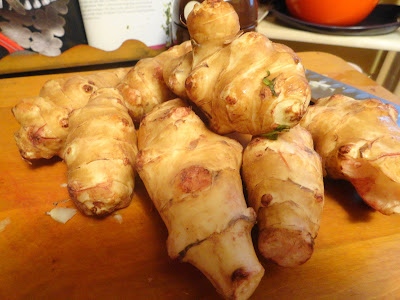 I also braised some kale – also simply with onion and garlic in some oil. Then I mixed the two dishes together to make a new dish that has a variety of tastes, textures and colors. Whether you serve them separately or together, these recipes are a great way to make new foods more inviting. Enjoy!
Roasted Jerusalem Artichokes 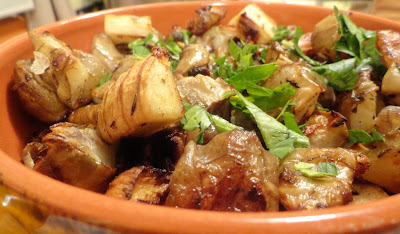 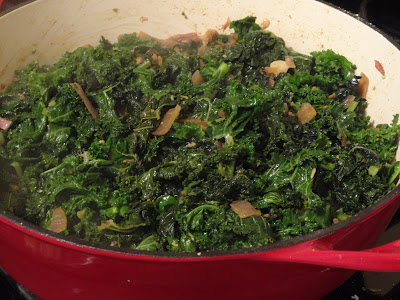 In a braiser or large pot, heat the oil over medium high heat. Add the onion and cook for 4-5 minutes until the onion is softened. Add the garlic and mix. Cook until fragrant. Add the kale, a bit at a time. Toss it with the salt, pepper and nutmeg. As it wilts down, add more of the kale until you have added it all.

Add the broth, lower the heat to low, cover the pot and let the kale cook until it is just wilted and bright green. It should only take a few minutes. Don’t overcook it. Check for seasoning. Serve while hot. The two dishes taste delicious served separately or mixed together. 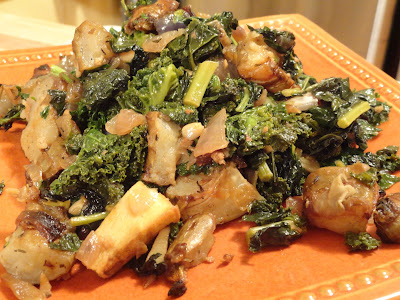