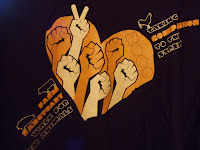 Sunday, October 4, 2009 was Farm Sanctuary’s Walk for Farm Animals in NYC. This was my first time attending and the first time I ever attempted fundraising. My husband and I registered and created a fundraising page on Firstgiving. We named our team “Farm Angels” and used the logo of angel’s wings. We set a goal of $500 and thought we would be lucky if we raised a small fraction of that money. Several times a day, I reposted my plea on Facebook asking people to sponsor us. I put a gadget on this blog and emailed requests to co-workers and friends. Lastly, I posted about the walk on the Weight Watchers discussion board (the last time I did that, WW pulled my post).

Hundreds of people with signs and Farm Sanctuary leaflets walked for over 90 minutes up Central Park West and back through the park. It was an interesting experience. People, New Yorkers and tourists alike, gawked at the crowd of walkers trying to read our shirts and see what our group was representing. Some people smiled and graciously accepted leaflets and flyers about compassionate eating. Others rolled their eyes or shook their heads as we walked by, showing us clear disdain. One group of people sitting on a park bench really stood out to me. As we walked by (just walked, mind you, no chanting, no protesting, just walking), one of the women in the group rolled her eyes and said with exasperation, “Oh, come on!” When offered a pamphlet, another woman actually snatched it from the walker’s hand and said in a vicious tone, “Give me it. Here’s what I think” and forcibly threw it in the garbage can. The walker took it back out of the trash and kept walking. What a forceful reaction to our just walking by! It’s amazing to think anyone could find something wrong with people striving for compassion. What that nasty woman didn’t realize was that the walker who handed her the pamphlet was CNN anchor and author, Jane Velez-Mitchell. I wonder if it would have made a difference had she known that.

After the walk, we received a bag lunch filled with vegan delights donated by many restaurants and companies. Empanadas from the V-Spot, cookies from Sacred Chow, fresh fruit from Candle Café and amazing vegan and gluten-free cupcakes from OMG Cupcakes and Sweet Cheeks Vegan Bakery. Plus granola bars, chocolate, bags of chips and more. The festivities, emceed by Farm Sanctuary’s Jasmin Singer, continued with music by Joy Askew and a list of impressive speakers. 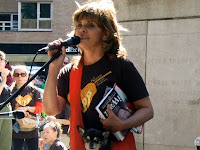 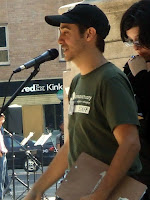 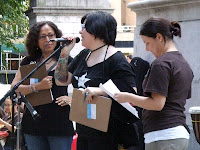 The coordinators of this year’s walk, Ruth Santana and Robyn Lazara stood up to thank the many, many people who made this event possible. Ruth and Robyn did an amazing job themselves and I’m proud to say they are my friends!!
Dozens of raffle prizes were given out – gift certificates to restaurants and vegan shops, handbags and coats, yoga classes and clothing, private photography lessons, books, a private tour of CNN and so much more. Unfortunately, the numbers they called never made it close to my raffle tickets. Oh well! I had fun kidding around with the giant cow and chicken (yes, I’m easily amused). 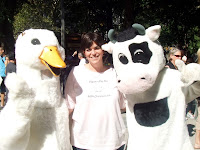 The walk was an amazing event. It is estimated that over 700 people attended. Vegans had a strong voice in NYC yesterday and it felt so good to be surrounded by so many compassionate people who feel the same way about animals as I do. Sometimes it can feel lonely being a vegan in a non-vegan world but yesterday, the people who walked through the park with ice cream cones were the outsiders who looked like they didn’t belong. Maybe one day the whole world will look like that. It’s something to aspire to.
Oh, and by the way, I did reach my fundraising goal and even surpassed it. Thank you to all the people who were generous and caring enough to support me and this important cause. I have always felt proud to be a Vegan but yesterday took the cake – the Vegan Cupcake, of course. Please continue to support Farm Sanctuary. You can get information about getting involved in their advocacy efforts by emailing nyc@farmsanctuary.org
Go Vegan!!
(Visited 397 times, 1 visits today)