Hi and welcome to The “V” Word. 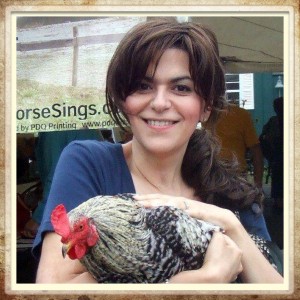 My name is Rhea. I’m a vegan and a strong animal advocate. I always wanted to be a vegetarian but I didn’t think I could live without chicken. After I watched the video “Meet Your Meat,” I could no longer be a part of the horror that animals go through. I soon after learned the word “vegan” and stopped eating and using all animal products. Now my life is filled with compassion instead of cruelty.

Becoming vegan also improved my health radically and so far, I have lost 116 lbs.and gotten off a dozen medications. What a great fringe benefit to get from living a kind life. That’s the icing on the vegan cake!

When my husband and I became vegan, there were no places to eat where we lived in The Bronx. We were hungry so I had to learn to cook. I started my blog, The “V” Word, to talk about my vegan journey and share a few recipes. It wasn’t long before it turned into a food blog and now The “V” Word Cookbook is coming very soon.

When I’m not cooking,  I am a college professor specializing in child and forensic psychology. I watch way too much TV and play Scrabble almost everyday. I share my life with a rescued Westie mix named Benoni and a rescued husband named Tom.

It is my hope that I can spread the “V” Word and compassion to improve the world for animals and for people.

Other Members of The “V” Word Family 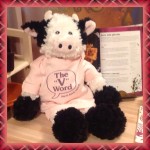 Trudy, the official spokescow of The “V” Word and Executive Vice President in Charge of Public Relations 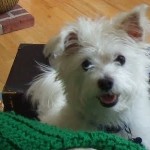 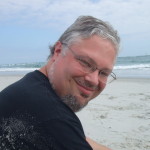