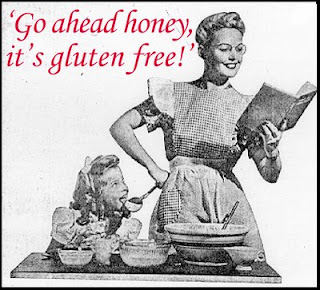 The “V” Word continues to celebrate VeganMoFo with the other 25 letters of the alphabet. Today the letter “G” is for Gluten-Free Products I Love. 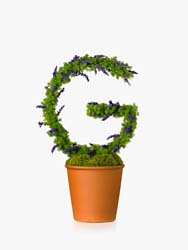 After reading Kris Carr’s Crazy Sexy Diet and Dr. Joel Fuhrman’s Eat to Live, I decided to switch to a gluten-free diet. I suffer from autoimmune diseases which are worsened by inflammation. Dr. Fuhrman states that the symptoms of many autoimmune disorders can be ameliorated by avoiding wheat and gluten.

At first it seemed daunting. I mean, I already gave up meat, dairy, eggs, refined foods and processed foods. Now I had to eliminate seitan, rye, barley and the gazillion foods that contain wheat. When I first attempted being gluten-free, I did it half-heartedly – meaning I cheated a lot. As expected, I didn’t feel any difference. But when I got serious and really ate a gluten-free diet, the changes were amazing. My symptoms did get significantly better. I’m talking better quality of life and ability to function better. Better enough to make me want to stick with being gluten-free forever. And on those rare occasions when I do cheat and have some seitan or rye bread, I pay for it for the next few days.

There is a lot of talk about people going gluten-free as part of a trend or fad. That’s probably true. There is more awareness about celiac disease, gluten intolerance and gluten-free food than ever before and that’s a good thing. But there are also people adopting the diet to lose weight or to get an energy burst. The two motives should not be confused. It’s likely that anyone would feel better and/or lose weight on a gluten-free diet. It means giving up most refined and processed foods which are not healthy choices to begin with. I mean, of course, one would feel better eating whole foods rather than frozen or prepared foods even if they are Vegan.

But for those people who do have a medical reason to avoid wheat or gluten, it isn’t as hard as they might think. There are tons of Vegan, gluten-free products out there that are just as delicious as their gluten-filled versions. Here I am going to share a few of my favorite products that have become staples in my pantry.

1. Frozen Burgers
The area that was most affected by going gluten-free was being able to buy frozen, prepared foods. Of course, I miss Gardein..A LOT! Even though it’s always better to make your own food than eat frozen meals, sometimes it’s just convenient to have something prepared on hand.

Sunshine Burgers are always in my freezer now. They are made with sunflower seeds, brown rice and other organic ingredients. They contain no soy or wheat. There are 4 flavors of burgers: Original, Barbeque, Garden Herb and Southwest. They also have Falafel Patties and Breakfast Patties. 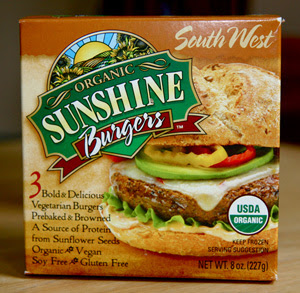 Sunshine Burgers are healthy and delicious. For some reason, they come 3 in a box rather than the usual 4. I don’t know why they come in 3’s but I do appreciate the portion control that gives me. Tom gets 2 and I can only have 1 – no matter how much I want another! 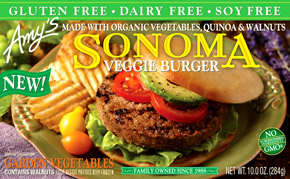 2. Bread and Pasta
This is probably the category most dreaded by gluten-free people. It took me a while to get used to gluten-free bread and longer to find one that didn’t taste like plywood. I know it’s possible to make delicious Vegan, gluten-free bread because I have a friend who bakes the most incredible focaccia and I’ve been to restaurants that made amazing garlic bread. But every loaf I bought in a store could have been registered with the FBI as a deadly weapon. 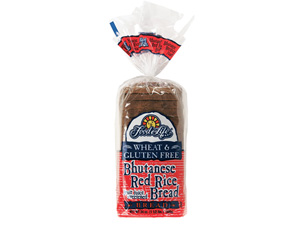 Several months ago I read an article in Vegetarian Times about gluten-free pastas made from different sources. One of them was made from corn. They wrote that corn pasta is a hearty type best used with hearty sauces. Honestly, the article scared me away from trying it but one day I bought a box of DeBoles Corn Spaghetti and was pleasantly surprised.

I made a dish of corn spaghetti with a light garlic and oil sauce and it was to die for. The corn pasta was thicker than wheat pasta but not chewy. It was nutty, tender and unlike other gluten-free pastas, it didn’t stick. It was a perfect match with the delicate sauce. It comes in 8 oz. boxes so you get that portion control for free!

Another brand of pasta I love is Tinkyada Rice Pastas. They are made from just rice and water and they are delicious. The texture is never mushy or too chewy. Best of all, they come in many varieties including spirals, penne, shells, lasagna, spaghetti, spinach spaghetti, and angel hair. They also seem to be the least expensive of all the gluten-free, specialty pastas and are widely available.

3. Flours
When I gave up refined foods, I switched to whole wheat pastry flour. I used it for everything but now my go-to flour is chickpea or garbanzo bean flour. I use it for baking, gravies and egg replacement. When you read any of my recipes that use flour, you will usually see chickpea flour. It’s light and has a nice taste that doesn’t overpower or significantly alter any recipe. The brand you’ll most likely see in stores is Bob’s Red Mill.

The other type of flour I use most is brown rice flour. I use this only for baking which for me means I don’t use it often 🙂 It is heartier and has a good, nutty flavor. I’m still in the experimental phase with flours. I’ve bought amaranth and fava bean flour but there are so many types to try: millet, oat, almond, tapioca, etc. Arrowhead Mills makes a wide variety of gluten-free flours.

4. Sauces/Condiments
While many wheat/gluten containing foods seem obvious, there are many others that are surprising. I never knew that wheat was in so many products. It’s in soy sauce, Vegan worcestershire sauce, and places that leave you wondering, “Why would they put wheat in that?”

Being gluten-free means having to make my own Chinese food since a restaurant that would use gluten-free soy sauce would be a rare find. San-J makes a large variety of gluten-free soy sauces, teriyaki and other Asian sauces. My pick: Organic Gluten-Free Reduced Sodium Tamari. They even come in travel packs! Woo Hoo! 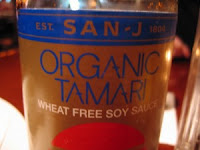 Most of Thai Kitchen’s Sauces are gluten-free. I love their Green Curry Paste and Peanut Satay Sauce. Just be careful as all their sauces are not Vegan! 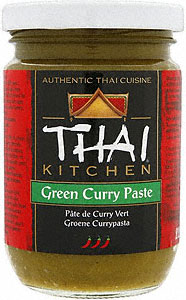 I remember how heartbroken I was when I learned that worcestershire sauce had anchovies in it. It’s surprising how many products have fish in them – did you know some orange juices contain fish? Yuck! Read those labels and watch out for anything that has added Omega-3s.

So I was happy when I found out about Vegan worcestershire sauce. There are a couple of brands including Annie’s Naturals and Wizard but they both contain wheat. San-J used to make a gluten-free version but to my knowledge it is no longer available. But don’t worry, Edward & Sons makes one. In fact, they may be the only company that makes it: Wizard Organic Vegan Gluten-Free Worcestershire Sauce.

There are some recipes where only worcestershire sauce will do. I’ve tried substituting a mix of balsamic vinegar and tamari and it’s good but it’s not the same. Worcestershire Sauce has that “classic savory marriage of organic tamarind and soy with the Wizard’s zesty edge.” I love using it in veggie patties, gravies, veggie meatloaf and other recipes where I want a deep, rich flavor. This product can be hard to find so unless a store is willing to order it, I tend to buy it online.

Hopefully, more and more companies will make gluten-free, Vegan versions of their products. Sure, I still miss seitan but I’m definitely not missing out on any flavor. Just try any of my recipes and see!

“G” is for Gluten-Free Products I Love. For other gluten-free “G” words, try my Gnudi Balls and my Gluten-Free Spicy Italian Sausages.

3 Responses to VeganMoFo: "G" is for Gluten-Free Products I Love