Since I wrote the first part of my Farmers Market Daughter post, some good things have happened. I heard from Dammi who is in Sri Lanka with her mother again. It was nice to reconnect with her. She was very touched by my story about her.

I also have been in contact with Save Animals Go Vegan Bistro and encouraged them to make a Facebook page. Hopefully, lots of you will go “like” the page even though they are in Ithaca. They are amazing activists. Visit their web site too and show them some sweet vegan love! I wish they were here in Woodstock. We don’t have vegan cupcakes here 🙁

Deb at Save Animals Go Vegan Bistro let me know about a documentary made by Ithaca fimmakers, Tribe of Heart. They have a newly released DVD called “Peaceable Kingdom: The Journey Home” which features animal rights advocates including those from the Maple Farm Sanctuary.

Here is a trailer of the film:

As promised, here are the recipes that go along with the Vegetable Pakoras and Cucumber Raita. The first is a Spiced Rice – brown rice cooked with the aromatic spices of cumin, coriander, fenugreek, mustard, and garam masala. It tastes even more delicious than it smells.

Then there is an Indian Cole Slaw. Green and red cabbage, scallions and carrots are tossed with vinegar, fresh ginger, lime juice and spices. It’s the perfect side dish, fresh and crunchy, to balance the fried pakoras and the tender rice. This meal really brings back special memories for me. Enjoy! 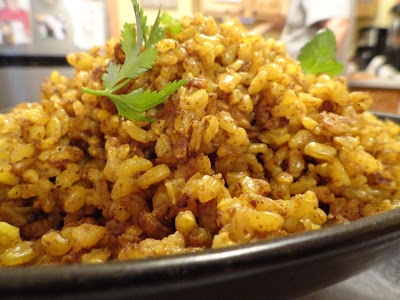 In a medium saucepan over medium heat, add the spices and let cook about a minute until fragrant. Add the rice to the pan and toss to coat with the spices. Let cook a minute or two, then add the water. Bring to a boil, then cover and reduce to simmer until the water is absorbed, about 30-40 minutes. Turn off the heat and let sit an additional 10 minutes. Fluff with a fork, add salt to taste and garnish with cilantro. 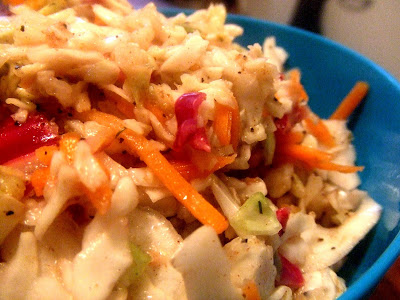 Combine the vinegar, lime juice, ginger, spices and agave in a small bowl and whisk until it’s fully mixed. Taste for any adjustments. Place the cabbage, carrots and scallions in a large bowl and toss with the dressing. Set sit until ready to serve.