Here is something that always confuses me when I’m watching a cooking competition on TV: the same chefs who can create wonders with whatever challenges they are faced with or strange combinations of ingredients they are given go stone-cold frozen when they are given a vegetarian, or worse, vegan challenge. They look at a block of tofu as if it’s a grenade with the pin pulled out. After a few minutes of the obligatory moaning, groaning and cursing of their fate, they set about on their struggle to create a flavorful dish without meat and (gasp!) without butter. Then these chefs, many of whom are James Beard nominees and winners, many of whom have 4- and 5-star restaurants, present their dishes. It’s almost guaranteed there will be pasta primavera and grilled portobello mushrooms. And if there is tofu, chances are it will be grilled with no marinade or seasoning other than salt and pepper and then, not surprisingly, the judges will remark about how tasteless it is.

A similar thing happens in many restaurants who serve, or will offer to make, vegan dishes. There might be a pasta dish (ask them to hold the cheese) or a salad (ask them to hold the cheese) or a tofu dish but usually the selection is very limited and often, so is the flavor. If you are vegan and don’t live near a city filled with vegan restaurants, you know what I mean. You take what you can get or you eat at home. 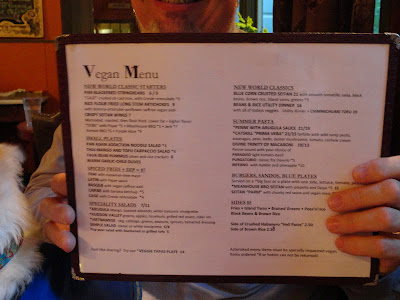 NWHC is owned by Chef Ric Orlando, a chef who knows all about flavor and food – ALL food. He also designed and manages New World Bistro Bar in Albany, NY (which also has its own vegan menu). His restaurants have won numerous awards including Metroland’s Top 3 Vegetarian Restaurants. Chef Ric has been on numerous television shows including his own 13-episode Public Television series “Ric Orlando’s TV Kitchen.”

Our first visit to NWHC wasn’t actually planned. Tom had made reservations to celebrate my birthday at a different restaurant who assured him they could create a spectacular vegan meal for us. However, by the afternoon of my birthday, they still had no clue what they were making for us. Rather than risk ruining my birthday, Tom changed our plans and we went to NWHC. We were already planning to go to NWHC for Tom’s birthday 2 weeks later. It was the best birthday gift I could have gotten! 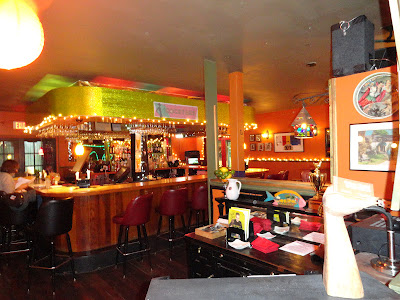 Let’s start with my favorite thing: appetizers! They are all amazing. We can never choose so we don’t. We get them all! Well, we get as many as we can eat at one time. The most popular appetizer is the Pan Blackened Stringbeans. You may think you’ve had green beans before but you’ve never had green beans like these: crusted with Chef Ric’s own “CAGE” seasoning, cooked on cast iron and served with a Creole remoulade he should bottle and sell! 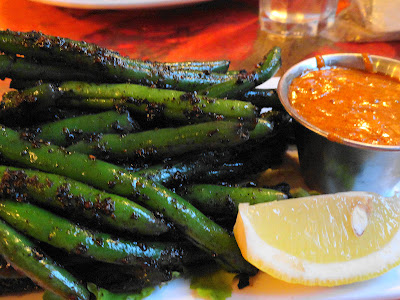 Rice Flour Fried Long Stem Artichokes – creamy artichokes inside, crispy rice flour coating outside. What could be better? How about dipping them in a lemony-artichoke-sunflower-saffron vegan aioli? Amazing! 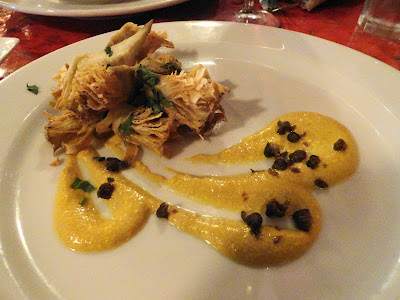 Crispy Seitan Wings – if I could only ever eat one gluten food again in my lifetime, this is it! Those who know me and my story know chicken was my favorite food before I went vegan. I took one bite of these and exclaimed, “Oh my goodness, he gave me back fried chicken.” These are amazing, crispy, tender, juicy and healthy. They are not deep-fried. These babies are marinated, roasted and then flash-fried. They are delicious plain but you have your choice of 5 dipping sauces of varying degrees of hotness according to the “Ric-ter Scale.” So far the Korean BBQ is my favorite but I’m still working my way through them. 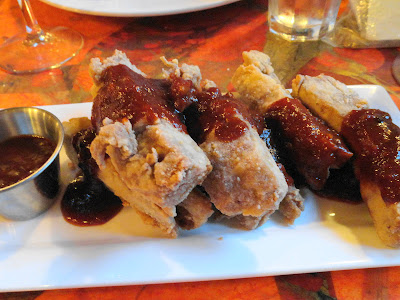 There are Spiced Fries which are crunchy and creamy, perfectly cooked. They come with your choice of 5 dips: Thai, Latin, Caribe, Cage and my favorite Basque. 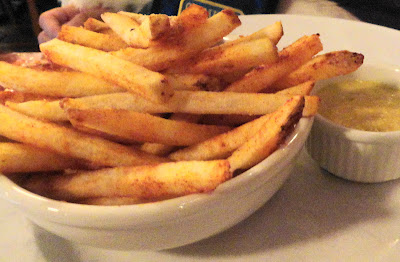 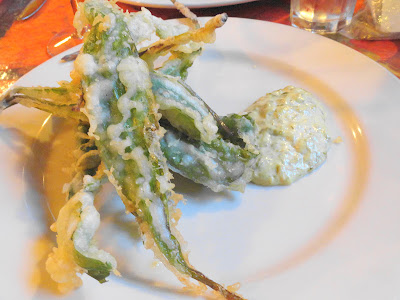 You would think we couldn’t eat another bite after all the appetizers but I have my journalistic obligations 🙂 The first time we went to NWHC, Tom had the Blue Corn Crusted Seitan. It comes with tomatillo salsa, black beans, brown rice, island yams and greens. Tom loved the seitan which was HUGE! I couldn’t keep my fork out of his plate because the rice, beans and greens reminded me of the Ital food I miss so badly. 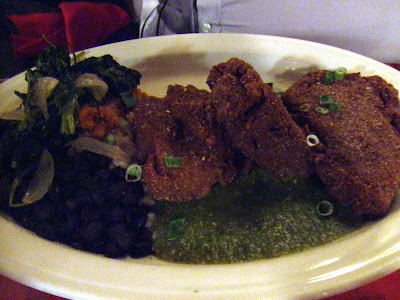 I had the Catskill “Prima Vera” which, believe me, is not your typical pasta primavera. This dish is made with a wild ramp pesto, asparagus, peas, leeks, oyster mushrooms, tomatoes and a cashew cream that was thick, smooth and delectable. In fact, Benny ate half my pasta. The pasta dishes can also be made gluten-free and did I mention, there is also an entire gluten-free menu! 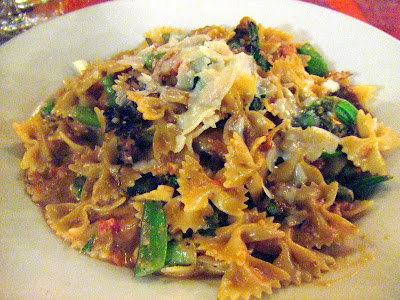 The next time we went for Tom’s birthday, I behaved a bit better and had a salad. NWHC offers Specialty Salads with fresh, local, Farmer’s Market produce. I tried the Hudson Valley which contains greens, apples, hazelnuts, grilled red onion and a cider vinaigrette and loved it. Blackened or grilled tofu can be added to any salad. 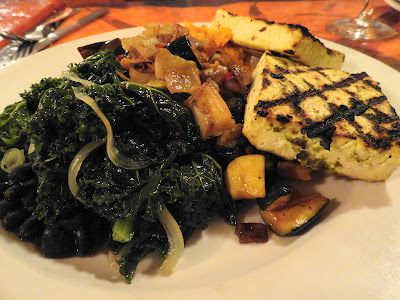 Tom had the Beans & Rice Utility Dinner with Chimmichurri Tofu. It sounds like a simple dish but it’s packed with flavor. Clearly, Chef Ric knows what to do with a block of tofu! 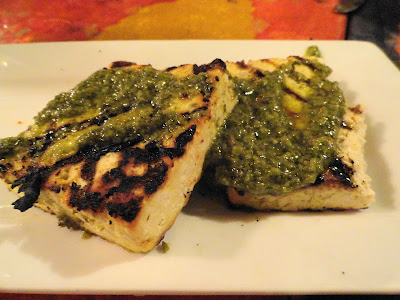 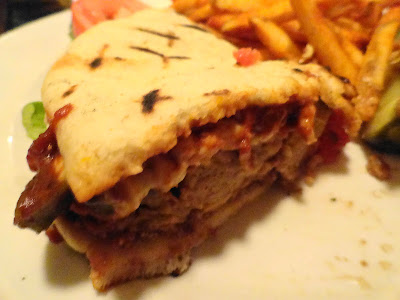 The fourth time we went, the summer menu was in full swing. Tom had the Purgatorio – a classic fra Diavolo. It was spicy but not too spicy (a 5 on the “Ric-ter Scale”) and perfectly cooked. Tom used every bit of his foccacia to mop up all the sauce. 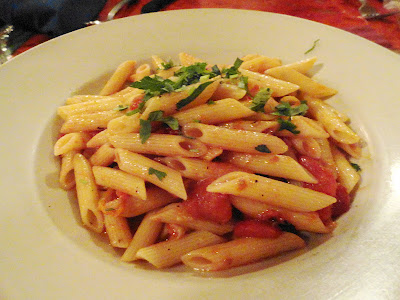 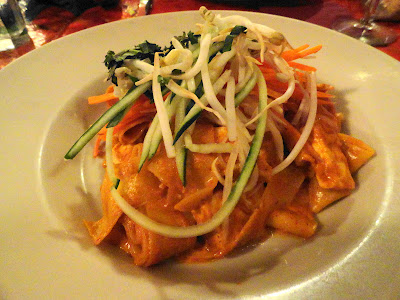 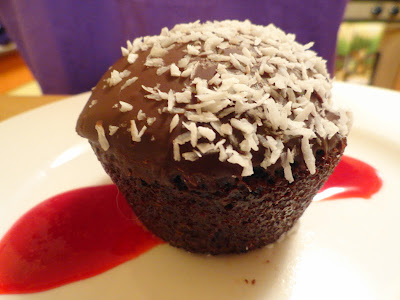 NWHC has become my favorite restaurant in the Hudson Valley. It isn’t often that you can go to a non-vegan restaurant and not only have so many outstanding vegan options but a separate vegan menu. Chef Ric is NOT a chef who would be rattled by a vegan “challenge.” Because for him, there is no challenge. As he said when we were talking, “You don’t have to be vegan to cook great vegan food.” I agree. A great chef knows how to cook great food. Period. And Chef Ric Orlando does just that!

If you visit Woodstock or come to visit Woodstock Farm Animal Sanctuary (where Chef Ric often contributes his food to events), make sure you also visit New World Home Cooking Co. And be sure to bring your appetite!! 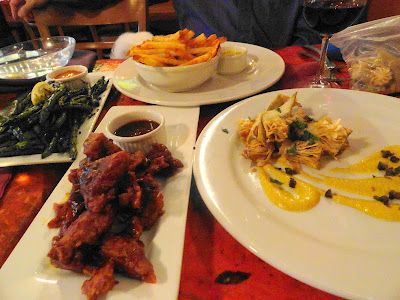