By Rhea on November 19, 2010 in Entrees, Recipes, Salad, Tofu/Tempeh Dishes 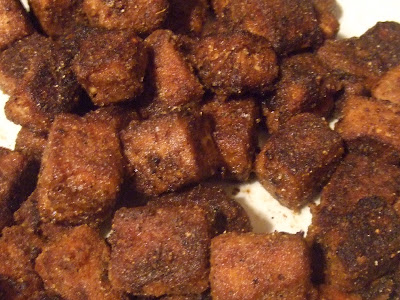 In the old days, during the 20th century P.V. (pre-vegan), I ate a TON of fast-food. In fact, I’m quite embarrassed to say here just how much fast-food I ate but given that I’ve lost over 110 lbs., I guess that’s no shock. One of the foods I had absolutely NO willpower around was Wendy’s chicken nuggets. Only Wendy’s, it was the only brand I liked. But I wouldn’t just get a 5-piece for 99 cents; I would get several of those…as the appetizer to the rest of the calorie, salt and fat laden meal I ordered. UGH! I feel sick just thinking about it.
Of course, I don’t eat fast-food anymore. My diet is healthy, largely organic with the bare minimum of processed foods and totally Vegan. Recently I learned that I CANNOT eat fast-food anymore when I tasted some french fries from a fast-food chain and thought they were disgusting (even if they were Vegan). All I tasted was salt and grease, not a hint of potatoes, and my mouth burned as if I’d ingested brimstone. That actually made me happy, though, to realize that my prior obsessions no longer had a hold on me.
But that doesn’t mean that I don’t ever crave familiar foods. It’s a cognitive thing. My brain sometimes wants the “type” of foods that are familiar to me, have positive (or negative) associations, or I get nostalgic for. So I create healthier versions of them at home. I also have rules I follow: for instance, if I want a fried food like nuggets, I can have them but with salad, not fries. If I want fries, they need to accompany something fresh so that I end up with a balanced meal.
That’s what this meal is: a balanced, easy, and fast meal that I like to turn to when I don’t know what to make, don’t have a lot of time to cook or when I just want dinner I can eat with my fingers. Tofu nuggets are delicious and I can have 20 pieces, guilt-free. I like to pair the tofu nuggets with either a fresh kale salad or sometimes, kale chips.﻿ This meal lets me have a bit of indulgence but no consequences on the scale the next day (of course, the nuggets can also be baked but that would defeat the indulgent part for me).
Tofu Nuggets
Ingredients
1 lb. extra-firm tofu, drained
1 – 2 TBS. canola oil 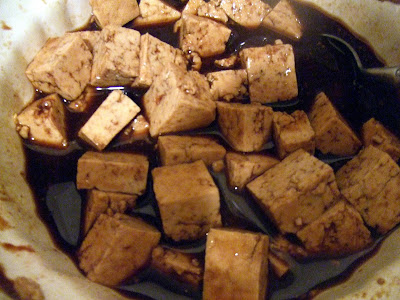 For the marinade: honestly, I don’t measure anything here and I don’t follow any specific recipe. I throw whatever I have into a bowl and taste it until I get something I like so be loose and care-free about it. I tend to like spicy, savory flavors rather than sweet and tangy ones.
Soy Sauce (low-sodium)
Teriyaki Sauce
BBQ Sauce
Spicy Brown Mustard
Ketchup
Rice or Balsamic Vinegar
Liquid Smoke
Water (to thin the marinade out) 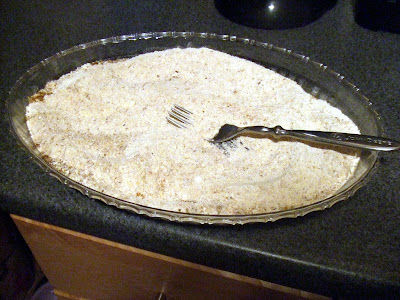 For the breading: again, I don’t really measure and you should use whatever herbs and spices you iike.
Whole-wheat bread crumbs
Corn meal
1 TBS. ground flax seeds
3 TBS. nutritional yeast
Salt and pepper
1 tsp. cumin
1 tsp. paprika
1 tsp. red chile powder
1 tsp. cumin
1 tsp. oregano
2 tsp. garlic powder
Directions
Mix all the marinade ingredients in a deep bowl. Cut the tofu into small cubes and immerse them in the marinade. Let sit for at least 15 minutes; the longer, the better but I find 15 minutes to be just fine. Mix all the breading ingredients into a shallow dish.
Heat a skillet with canola oil.  Meanwhile, move the tofu cubes from the marinade into the breading mixture. Make sure the cubes are thoroughly covered and add to the skillet. Let cook until browned and crispy on all sides. Add oil as needed if the pan runs out. Cook the tofu in batches so the skillet is not overcrowded and it browns faster. Remove the tofu nuggets to a plate lined with paper towels to absorb any extra oil. Serve while hot. 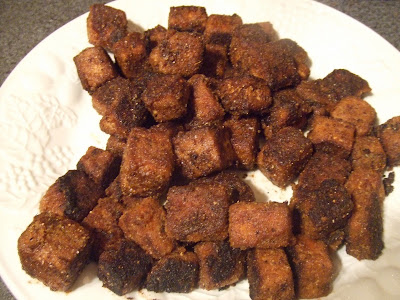 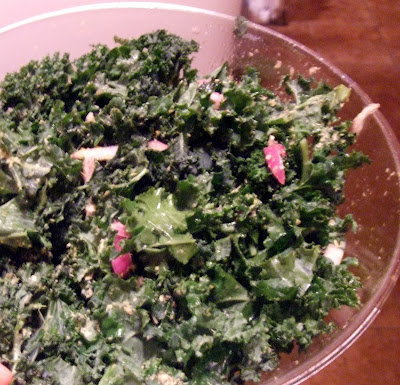 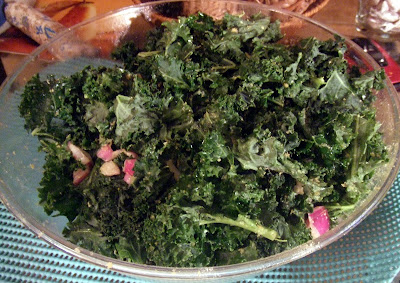