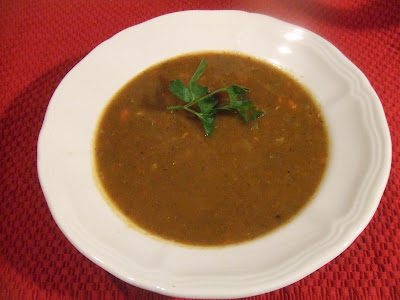 “Oh, the weather outside is frightful…” but this soup is so delightful!

The ground is covered in snow and it’s so cold outside. Of course, that doesn’t stop Benny from going out and playing in the snow. All decked out in his new (and expensive) snowsuit and his Pawz booties, Benny loves jumping in the piles of snow like a bunny.

He dives head-first like in a swimming competition, searching for whatever creatures might be hiding under those white blankets, and emerges completely covered in snow. You can’t even see his eyes. When he’s done (which means that every exposed part of him is now wet), he looks like a cutie Pupsicle. The price he pays for his fun is some quality time with lots of towels and a hair dryer. 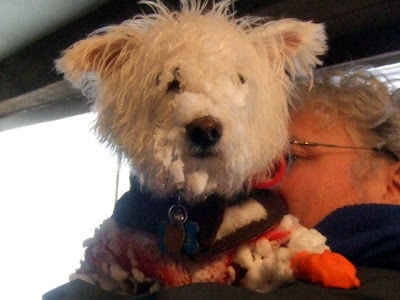 Now me, on the other hand, I prefer to keep my head above the snowline. And weather like this makes me want something hot and comforting. My favorite soup is split pea which, depending where you live, can be hard to find in veg form. Having grown up in a mostly Kosher home, I don’t understand the idea of putting pork in vegetable soup and being a Vegan means I’ll never figure that out. Of course, I can buy canned soup but even the ones that are “low-sodium” still have too much salt for my taste. Plus what can be better than making your own soup and feeling the warmth of that big pot of yumminess simmering on the stovetop?

As a twist from ordinary split pea soup, I like to kick mine up with some spices guaranteed to warm me up, not to mention reap the added health benefits of the ginger, curry, tumeric, cinnamon and red pepper flakes – cold prevention, antioxidants and an increased metabolism. It’s everything you need to get you ready for your next snowball fight. 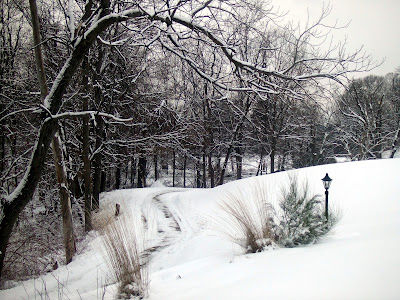 Directions
Heat oil in a large pot over medium heat. Add the onion, garlic, celery, carrots, and potatoes. Add the salt, pepper, oregano, ginger, cumin, paprika and coriander. Saute for about 6 minutes until the vegetables are softened.

Add the curry, turmeric, red pepper flakes, cinnamon and bay leaf. Stir for 30 seconds until fragrant. Add the split peas. Stir in broth and bring to boil over high heat. Reduce heat to low and let simmer uncovered about 90 minutes, until it is at the desired consistency. If you want, you can use a potato masher to mash up some of the split peas and stir well to mix and thicken the soup. If you want it really smooth, you can always put parts of the soup into a blender but I like my soup chunky.

Top with the garnish of your choice: vegan sour cream, cilantro, croutons, etc. Serve while hot. 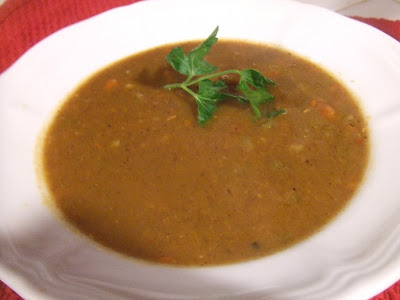