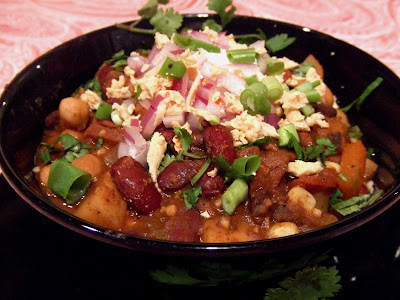 We had our first snowfall the other day. Beautiful snow that covered the grounds and the cars and looked like whipped cream. It was time to break out Benny’s snowsuit. We have never found a coat that was able to keep him from shivering in the cold so we always double-layered him in a sweater and a coat. But then we had a special snowsuit custom-made for him. It’s made specifically to his measurements so it fits perfectly. It even has his name embroidered on the collar. This snowsuit keeps him toasty warm and he looks adorable in it too! 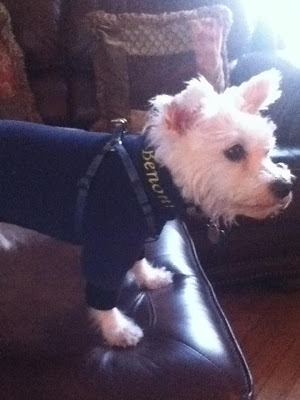 Since they don’t make the snowsuit in our sizes, we have to warm up with something hot and comforting. Nothing feels better than wrapping your cold hands around a hot bowl of yumminess! My Three Bean Chili does the trick.

For my chili, I used parsnips instead of carrots. Parsnips taste like carrots with a kick. They might not be as pretty as carrots but what they lack in looks, they make up for in personality. Spicy green chiles and red pepper flakes add another zing. I used a can of diced green chiles but if you have fresh serrano or even habanero chiles, go for it!

I used 3 different beans in this chili. That’s where the name came from. You can use 2 kinds of beans but then you would have to call it “It’s Supposed to Be Three Bean Chili But I Didn’t Listen and Only Used Two Beans Chili.” 🙂 Use whichever beans are your favorites. I used black beans, dark red kidney beans and garbanzo beans. You might be thinking chickpeas in a chili sounds strange but they add a nice firmer texture than the other softer beans. Trust me.

The garnishes run the range of raw red onions, vegan sour cream, scallions and/or vegan cheese. I used all of them along with bright, fresh cilanto. What’s better than a big pot of chili cooking, warming up the house and filling the air with the inviting aroma of tomatoes and spices? So if you’re feeling chilly, have some chili. Three Bean Chili. Enjoy! 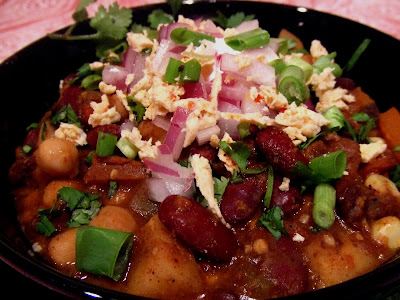 Directions
Heat the oil in a large pot over medium heat. Add the onion and sauté for 5 minutes until softened. Add the bell pepper, garlic and parsnip. Cook the veggies until tender, about 8 minutes.

Mix in the tomatoes, beans, corn, chiles and water. Stir in the spices. Bring the chili to a boil and then reduce the heat to a simmer. Simmer, uncovered, for 45 minutes, stirring often, until the veggies are tender and the chili has thickened. Add the cilantro to the chili. 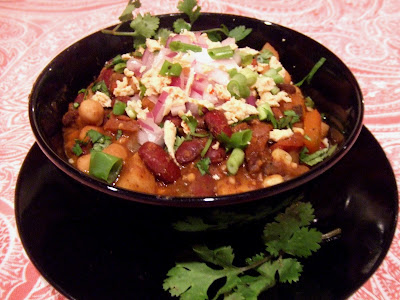 One Response to Three Bean Chili