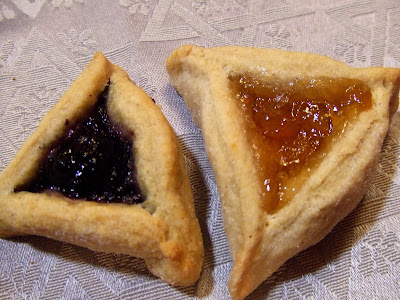 Happy Purim! There is no way that I could improve upon my Purim blog post from last year. It’s really good, if I do say so myself. It covers my childhood Purim experiences, the link between Purim and veganism, the exploitation of women and more! You should definitely read it here.

But I could certainly improve upon my Hamantaschen recipe. Last year’s was pretty bad. I was very new to baking (and you know I hate baking) and clueless about gluten-free baking. I thought I could just substitute a gluten-free flour mix for gluten flour in a recipe and that would be that. Boy, was I wrong! The Hamantaschen were crumbly although they did taste good.

Since then, I have been learning a lot about gluten-free baking. I’ve learned how to put together different flour mixes, adapt the liquid amounts and the magic of xanthan gum. I’ve made pizza dough, ciabatta bread and French bread (yet to be posted). So I thought I should improve the Hamantaschen recipe. It wasn’t as easy as I thought. 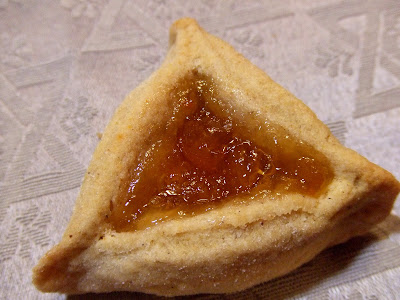 It took over 6 hours and 3 different doughs before I got it right. While I’m happy I succeeded, it sort of renewed my old dislike of baking so it might be a while before I tackle another gluten-free baking hurdle like Challah (but I WILL do it).

Anyway, here is the new and improved Gluten-Free Hamantaschen recipe. I used blueberry and apricot preserves for filling because that was what I had available. Use whatever fillings you love: prune, fig, raspberry, etc. If you want to make chocolate Hamantaschen, simply add some cocoa powder to the flour mix. I’ve made notes on last year’s post that the recipe has been updated.

These Gluten-Free Hamantaschen are tender, chewy and delicious. That’s definitely something to shake my gragger about! Happy Purim! 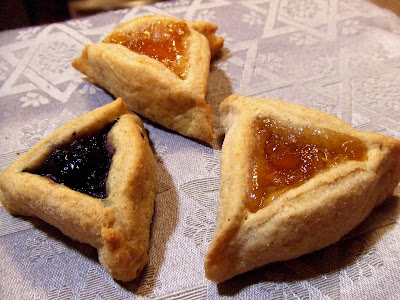 Preheat the oven to 375 degrees. Mix the dry ingredients in a large bowl. Add in the butter and mix until flour is clumpy. Add the vanilla and almond extracts to the dough. Add water slowly, mixing, until the dough comes together. Be sure to use the dough right away. If you can’t, refrigerate the dough until you are ready to use it and then let the chill come off of it before you proceed.

Using a tablespoon, take pieces of dough and form them into balls. Put each ball between two small pieces of parchment paper. Press down on the ball with your hand to form a flat disk, about ¼” thick. Place about 1 tsp. of filling onto the center of each disk.

Fold the disk into a triangle (handling it by the parchment paper makes it easier) and pinch the corners. Place hamantaschen onto a parchment covered baking sheet. Spray Hamantaschen with cooking spray. Bake for 10 minutes, then rotate the pan and bake an additional 5 minutes or until hamantaschen are slightly browned. Remove from oven and let cool. Store in a covered container to keep them fresh. Enjoy and Happy Purim! 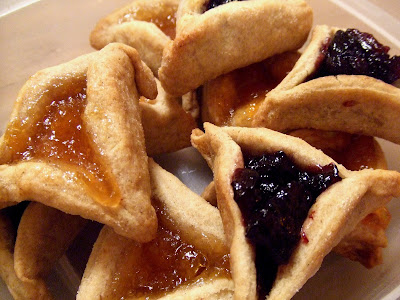