By Rhea on November 7, 2009 in Entrees, Recipes, Seitan Dishes 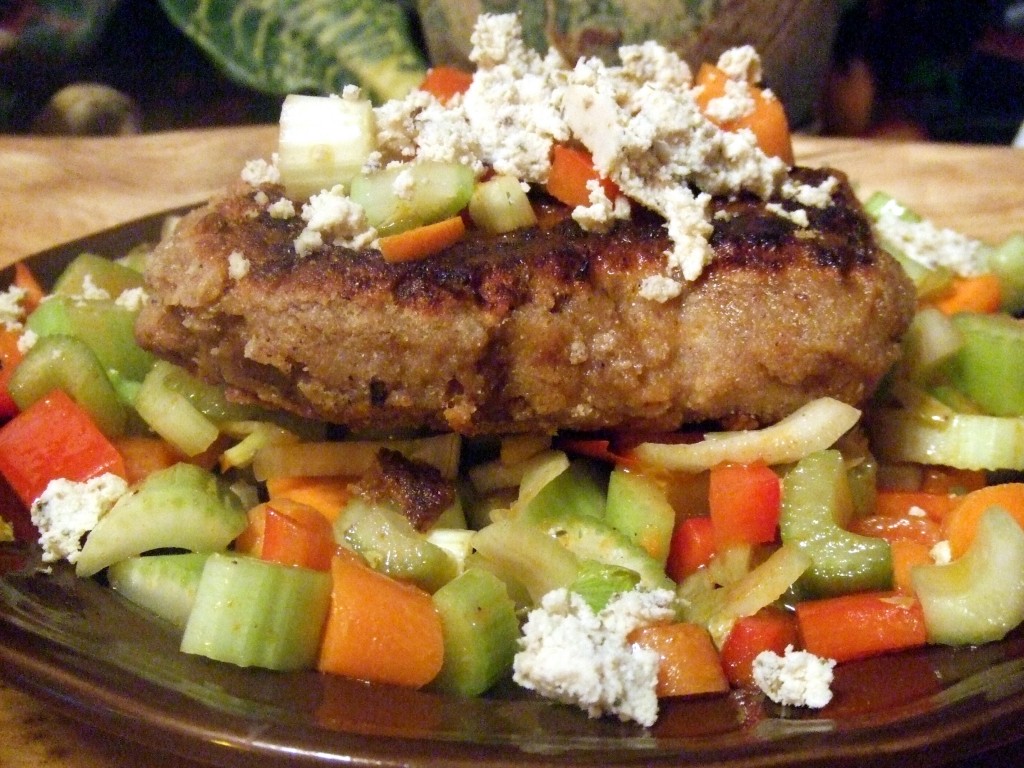 Before I became a vegan, my favorite food was chicken. In particular, two of my weaknesses were fried chicken and Buffalo wings. When I was a child, my mother would make the most delicious fried chicken. It required several wet paper towels because our hands would get so greasy. Whenever we went out to eat, I ordered fried chicken. Even if everyone else was getting ice cream sundaes, I wanted fried chicken. My father used to tease me I ate so much chicken that one day I would sprout feathers. Wow, is it any wonder I ended up with a weight problem? Years later, my mother developed her own oven-baked “fried” chicken, which tasted even better and was less fattening. We called it her “secret recipe chicken” so obviously, I can’t tell you about it 🙂

When I was in medical school and living in Manhattan, I was introduced to the concept of appetizers. Not that we didn’t have appetizers in the Bronx but mainly that meant antipasto. In NYC, I discovered stuffed potato skins, mozzarella sticks, nachos, and Buffalo wings. I can still remember the first time I ate Buffalo wings. A classmate took me to a pizza place where they apparently made the best wings and you could watch them being prepared. Looking back, you would think being in medical school and watching animal flesh being coated in butter and then deep-friend might have triggered some alarm bells in me but nutrition was not a topic covered in medical school and I probably wouldn’t have listened anyway. My food issues were far from being addressed back then.

Anyway, I became obsessed with Buffalo wings. Any place I went to eat, I had to order them, even if we ordered other appetizers. I joked about how I wanted to write a Zagat-type book, reviewing Buffalo wings all over New York and the country. For me, the perfect meal would have consisted of an appetizer of Buffalo wings followed by a huge bucket of fried chicken. Eventually, that type of behavior might have led to CPR for dessert.

I am so grateful that I learned about the suffering of animals and that compassion finally displaced my desire for foods created from cruelty. I read many vegetarian starter guides from PETA, Vegan Outreach and Compassion Over Killing. I watched the video, “Meet Your Meat” which brought me to tears and I vowed never to be part of that cruelty again. Realizing that it was still hypocritical to not eat chicken but consume eggs which leads to the suffering and deaths of other chickens (the same applies to not eating beef but eating dairy which leads to what I personally feel is the worst suffering – the separation of baby calves from their mothers, the veal industry, the artificial insemination, exploitation and death of cows), there was no choice but for me to adopt a vegan lifestyle. Becoming a vegan was the best decision I ever made.

If we are eating out in NYC, Curly’s Vegetarian Lunch makes delicious vegan buffalo wings. They are sensational! I have also learned to make my own buffalo wings and my own version of fried “chicken.” Then I was reading some Rachael Ray recipes and saw how she made a buffalo-flavored version of chicken-fried steak. That sounded like something I had to try – in a vegan version, of course. The result? OMG! It is so delicious; it is like having buffalo wings and fried chicken in one dish but without the cruelty. This is indulgent so it has to remain a once-in-a-blue-moon treat for me. Enjoy but stay away from the scale for a day or two after.

Note: if you cut the seitan into smaller pieces, you could have seitan Buffalo wings. 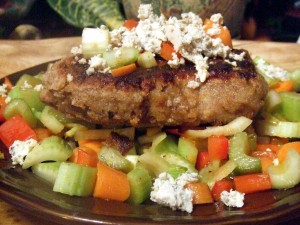 In a bowl, combine ¼-cup oil, 3 tablespoons hot sauce and the agave nectar. Add the celery, carrots, bell pepper and toss to coat. Set aside.

In a shallow bowl, whisk together the flaxseed, milk and remaining 1 tablespoon of hot sauce (if you like things really spicy, like I do, add more). In another shallow bowl, combine the flour, cornmeal (you could use just one or the other), salt and pepper to taste.

In a heavy skillet, heat the remaining ¼-cup oil over medium-high heat. Fry the seitan steaks until browned and crisp, about 3 minutes on each side. You may need to do this in batches depending on the size of the skillet and how many you are making. 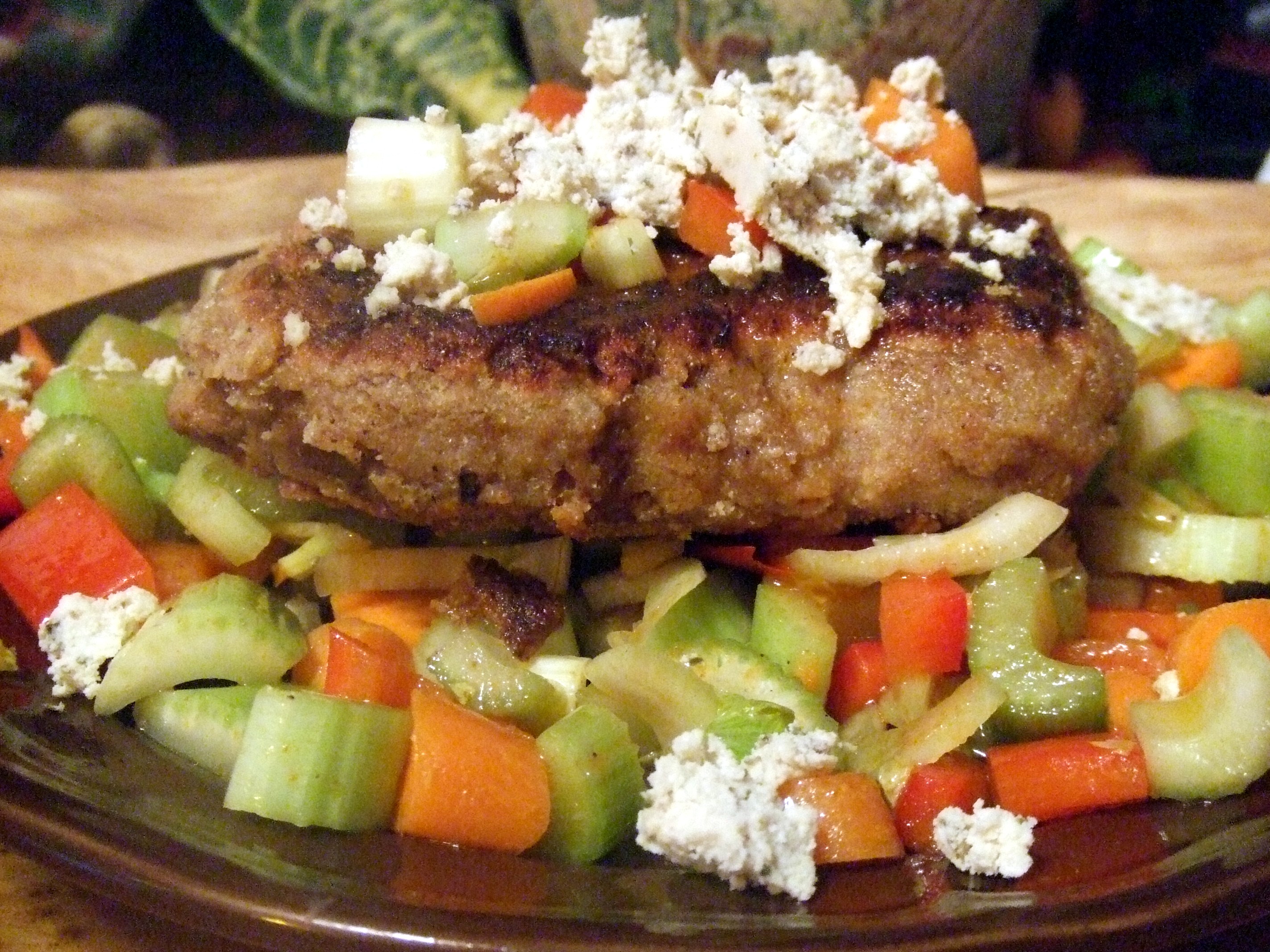