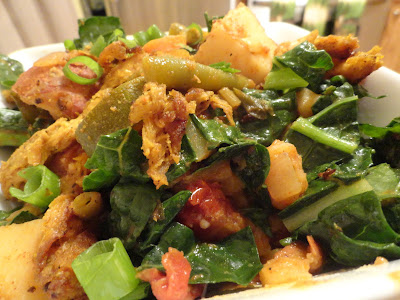 If I were granted a wish where I could choose just one TV celebrity chef to go vegan, it would be Rachael Ray. As I’ve written before, Rachael Ray is my favorite TV celebrity chef, though she would be the first to say, “I’m not a chef, I’m a cook.” Finding and watching Rachael on “30 Minute Meals” made me laugh, inspired me to cook and helped get me through a really hard time. You can read the post where I write about that and where I also veganized one of her recipes, my Tofu with Spicy Pepper Sauce, here. 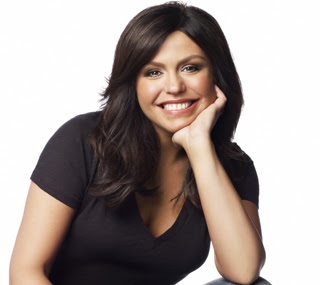 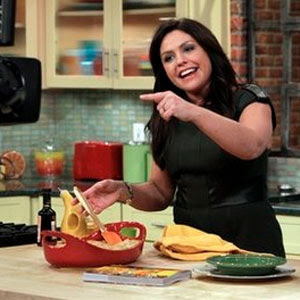 It was Rachael who got me off the couch and into the kitchen. Today my kitchen looks like a truck from Rachael’s warehouse was left unsupervised in my driveway – I’ve got the Bubble & Browns, the casserole dishes, the tongs, the spatulas and spoonulas and dozens of other RR products in all the bright colors I love. I still cook using many of Rachael’s techniques (I never measure anything) and if the spiders on the wall could talk, they would tell you I use many of her catchphrases when I talk about cooking (and while I’m cooking).
Rachael Ray is famous for making up words: “Yum-O” (which she doesn’t say anymore but is the name of her organization to help kids and families eat healthier), “sammies” (sandwiches), “BLDs” (dishes that are good for breakfast, lunch and dinner), and “EVOO” (extra-virgin olive oil) which was actually added to the dictionary several years ago. Another word she made up is “stoup.” Stoup is a dish that is a cross between a soup and a stew. It’s thicker than a soup but thinner than a stew. That’s what we are veganizing today – one of Rachael’s stoup recipes. 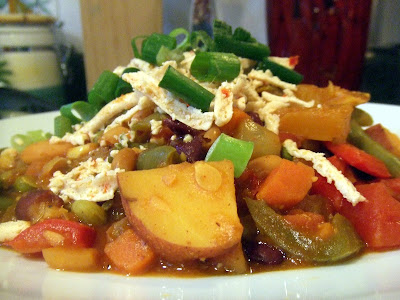 One of the first Rachael Ray recipes I ever made was her Chicken, Chorizo and Tortilla Stoup and that was before I went veg. When I did become vegan, Rachael’s recipes were the first ones I veganized. Most of her recipes are not that hard to veganize. Rachael uses more veggies, especially dark leafy greens, than any other non-veg TV chef I have ever seen. I chose this recipe to start with because it’s one of my favorites, it’s extremely versatile (I never make it the same way twice) and it’s my go-to dish when I’m not sure what to make but I know I want something easy, warm, comforting and satisfying.
It’s also a dish that has changed along with my dietary evolution. Obviously, I went from the original recipe to making it vegan. At first, I replaced the chicken with vegan “chicken” strips and the chorizo with soy chorizo. Later I replaced the “chicken strips” with Gardein‘s Chick’n Scallopini cut into slices. Since going gluten-free, I stopped using any of these products (although the soy chorizo from Trader Joe’s does not contain gluten). Chicken can be replaced by tofu cut into strips and sausage can be replaced by crumbled tempeh making the dish gluten-free, less processed and much healthier.
Most of the time, however, I skip all that and just make the stoup with extra veggies and/or extra beans. Sometimes I add kale or other leafy greens. Sometimes I mix kidney beans and black beans. Sometimes I make the stoup spicy and top it with vegan sour cream and tortilla chips. Other times, I am more calorie conscious and omit the potatoes and the toppings.
Every once in a while, if I want to indulge myself, I use Butler’s Soy Curls. They are TVP so yes, they are processed but they are non-GMO and have no chemical additives. And yes, they are addictive (thanks Chris). The point is that there is no end to the number of ways you can make this stoup. It’s a great “clean out the fridge” kind of dish. It can be made gluten-free, soy-free, and with all whole, fresh foods. That’s why I’m calling this dish my Yum-O Stoup. No matter how you make it, it always tastes delicious. 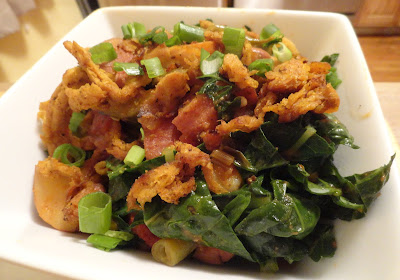 I’ve written the recipe here as close as it comes to the original but vegan, of course. And contrary to what most TV cooking shows think, YOU CAN’T PUT CHICKEN BROTH IN A DISH AND CALL IT MEAT-FREE!!!!!!!!!! Sorry, I had to get that out.
This is the first of several Rachael Ray dishes I will do this month. It’s been 7 years since I first saw her on TV and she’s still my favorite. I like to think of myself as “The Vegan Rachael Ray.” Hmm…maybe that will catch on one day…..Enjoy!
Yum-O Stoup 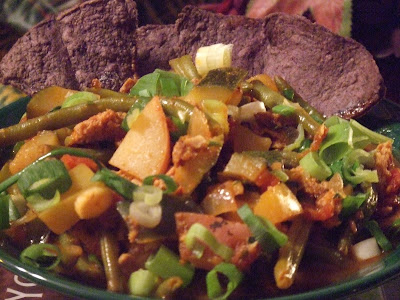 Basic Stoup Ingredients
2 Tbs. extra-virgin olive oil (EVOO), divided
1 tsp. cumin (or 1/3 of a palmful)
1 tsp. coriander (or 1/3 of a palmful)
1 tsp. turmeric (or 1/3 of a palmful)
1 tsp. garlic powder (or 1/3 of a palmful)
1 tsp. smoked paprika (or 1/3 of a palmful)
½ tsp. Kosher salt
¼ tsp. black pepper
1 block extra-firm tofu, pressed, drained and cut into pieces or 1 bag Butler Soy Curls (TVP), rehydrated and drained or vegan “chicken” strips
12 oz. soy chorizo or 1 block of tempeh, crumbled or any vegan burger or sausage crumbles
1 medium onion, chopped
4 small red potatoes, diced
1 red or green bell pepper, chopped
1 cup green beans, fresh or frozen
3 cloves garlic, minced
4 oz. can green chiles or 1 fresh green Chile, seeded and diced
1 Tbs. chili powder (or 1 palmful)
1 Tbs. cumin (or 1 palmful)
Kosher salt and pepper to taste
1 – 15 oz. can fire roasted diced tomatoes or 5-6 fresh plum tomatoes, diced
1 – 15 oz. can dark red kidney beans or black beans, rinsed and drained
2-4 cups low-sodium vegetable broth (depends on how thick you want it)
2 cups shredded vegan pepper jack or Cheddar cheese
Chopped scallions, chopped cilantro and vegan sour cream for garnishes
Blue corn tortilla chips
Preheat a soup pot over medium-high heat.
If you are using tofu or soy curls or “chicken” strips: heat 1 Tbs. of oil in the pot. Add the cumin, coriander, garlic powder, turmeric, paprika, salt and pepper to the oil and mix it well. This will infuse the oil with all the spices. Don’t let the oil burn.  Add the tofu/soy curls/”chicken” strips to the pot and toss them until they are coated with the spicy oil. The reason for this is that these foods absorb a lot of oil. We might as well let them absorb flavorful oil and season them from the inside as well as on the outside. Let cook until they are browned and crisp, flipping them around every few minutes, for about 6 to 8 minutes. When they are done, remove them from the pot and set aside. DO NOT EAT THEM. I DARE YOU! (I always make a bit extra because I know I’m going to munch on them).
If you are using soy chorizo, crumpled tempeh or burger crumbles: add more oil to the pot, if necessary. Add the soy chorizo, burger crumbles or crumbled tempeh (I use a food processor and pulse the tempeh until it is in crumbles) to the pot. Mix it so that is gets coated with the oil and cook until browned, about 5 minutes (the tempeh may take a bit longer).
If you are not using either the “chicken” or “sausage” ingredients: begin the recipe with heating 1 Tbs. of the oil and adding the veggies as described in the next step.
Add the onion to the pot and cook until softened, about 3 minutes. Add the potatoes, bell peppers and green beans to the pot. Mix the veggies with the crumbles (if using). Cook for another 3 minutes until the veggies are softened. Add the minced garlic. It gets added on top of the veggies so it doesn’t burn. Add the green chiles and the spices to the pot. Mix everything well and cook for another 5 minutes.
Stir in the tomatoes and the beans. If you are only using vegetables, you might want to add 2 cans of beans and you can mix them up, using 2 different kinds. Add the broth. If you want it thicker like a stew, add about 2 cups of broth but if you want it looser like a soup, add up to 4 cups or 1 quart of broth. I prefer it with less liquid so I usually use about 2 or 2 ½ cups. Bring the stoup to a boil. When it starts to bubble, reduce the heat to medium-low and let it simmer, uncovered, until the potatoes are tender, about 10-15 minutes.
Right before you are ready to serve, return the tofu/soy curls/”chicken” strips (or what’s left of them. I WARNED YOU!) to the stoup and mix them in.
Ladle the stoup into shallow bowls and top each bowl with a generous handful of cheese. The heat of the stoup should melt the cheese when it’s mixed in. Garnish with scallions, cilantro, and sour cream. Serve with tortilla chips, if desired. 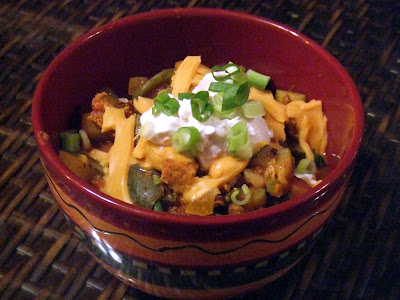