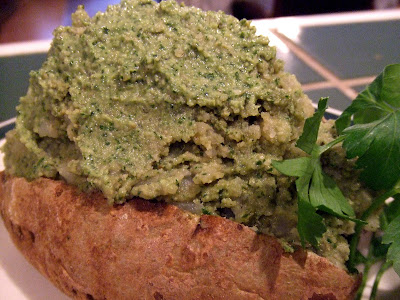 The “V” Word continues the VeganMoFo month of food with the letter “D”. Today the letter “D” is for Double-Stuffed Pesto Baked Potatoes. 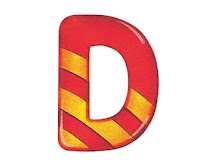 The basil was dying! I had bought a beautiful green bunch of basil, put it in water, and let the aroma fill the kitchen. Some of it got used but I had a lot left. While I was debating what dishes to use it in, it started to wilt. I had to use it and use it fast. But there wasn’t enough to make a full dish of pesto so I decided to try the other herbs and greens I happened to have on hand: cilantro, parsley and spinach.

When it comes to nuts, I love using walnuts for pesto. But again, I didn’t have a lot and knew I wanted to save some for muffins. How about cashews? Why not? So I used a combo of walnuts and cashews.

Turns out this Anything Goes pesto was the BEST tasting pesto I ever made! It was bright and verdant with a deep flavor. And it’s so pretty with it’s green speckled color. It’s my new favorite pesto!

Now I just had to decide what to do with it. I had a craving for baked potatoes and again thought, why not? So I combined the pesto with the creamy potatoes and the result was fun, different and delicious. 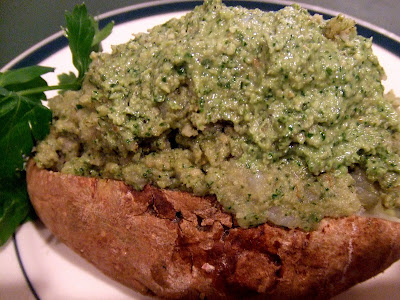 For the Anything Goes Pesto:

Put all ingredients into a food processor and mix until well combined. Refrigerate if not using right away. Cover with plastic wrap touching the top of the pesto. 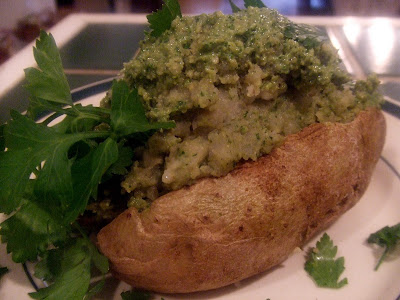 For the Baked Potatoes:


Scrub potatoes to clean them. Bake potatoes at 400 degrees for about one hour or until tender.

Scoop the flesh out of the potatoes into a bowl. Add the vegan butter, almond milk, salt, pepper and pesto to the potatoes. Mix until well combined.

Stuff the pesto-potato mixture into 4 of the skins. Serve while hot. 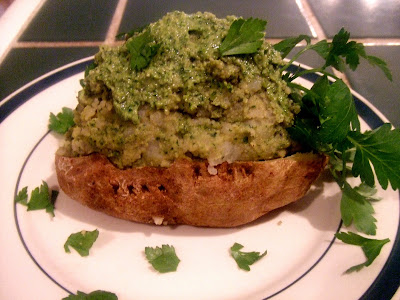 “D” is for Double-Stuffed Pesto Baked Potatoes. For another “D” word, check out my Deconstructed Colcannon: Cheezy Potato-Okra Corn Cakes with Cabbage and Collards.

VeganMoFo: "C" is for Colleen Patrick-Goudreau
VeganMoFo: "E" is for Ethiopian Greens, Beans and Quinoa Stew

5 Responses to VeganMoFo: "D" is for Double-Stuffed Pesto Baked Potatoes