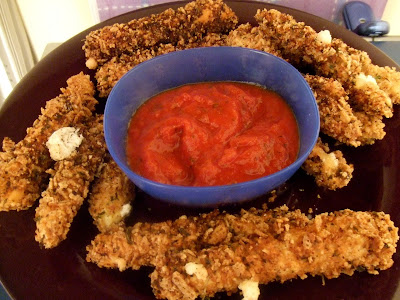 If you know me at all, you know I LOVE appetizers. In my perfect world, when you’re done with dinner, the waiter hands you back the appetizer menu instead of the dessert menu. Sometimes the best dinner is when everyone at the table just orders a bunch of different appetizers and everyone shares.

Appetizer hell is when there is an uneven number of items on the plate and everyone stares at that last popper or nacho chip waiting to see who will have the nerve to claim it. And then of course someone will ask, “Does anyone want this last piece?” and the others will reluctantly say, “No, you take it.” In the best scenario, that last piece will be split among you but it still won’t be enough. I mean, who wants half of a tortilla chip?

In our Pre-Vegan days (p.v), Tom and I had our definite favorites. I always wanted the Buffalo wings and he always wanted the mozzarella sticks. Rather than argue, we would order both…and a few others. As you know, when you are vegan, even though you can pretty much always find something to order for dinner at a restaurant, 99% of the appetizer menu becomes off-limits. Even the veggie appetizers (or “appies” as I call them) like zucchini sticks have eggs in the breading and who knows if they are fried in the same oil as the chicken tenders?

So in our Forever Vegan days (f.v.), I recreate my favorite appies but without the cruelty. I already took on the fried veggie sticks with my Eggplant Fries and my favorite with my Buffalo Tofu Fries. Now it’s time for Tom’s favorite: mozzarella sticks.

The only real trick to making your own mozzarella sticks is finding the vegan mozzarella that will hold up to the frying but will also melt so when you bite into it, you get that fun moment of the cheese just puuuuullllling and streeeeetchhhhhing out. Follow Your Heart Vegan Gourmet Mozzarella Cheese and Teese are two brands that can do the job. 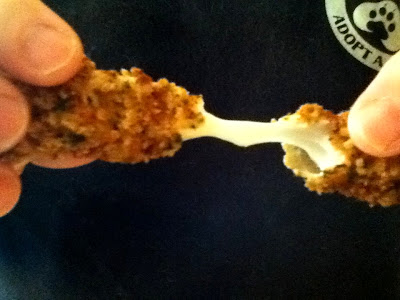 Since my mozzarella sticks are gluten-free, I bread them with chickpea flour and crushed up rice cereal. If gluten is not a concern for you, feel free to use your usual flour and panko or seasoned bread crumbs.

My Vegan Mozzarella Sticks are crispy on the outside and ooey-gooey cheesy on the inside. Serve them with a marinara dipping sauce. Just remember to uphold the MOST important appetizer law: make enough so everyone gets the same number of mozzarella sticks and avoid that awkward staredown of the last one on the plate! 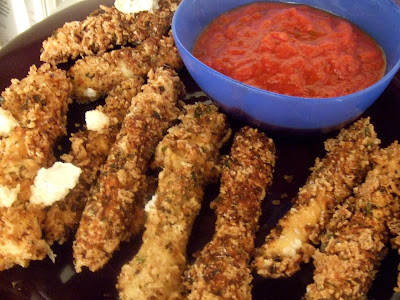 Directions
Cut the block of vegan mozzarella into stick shapes. 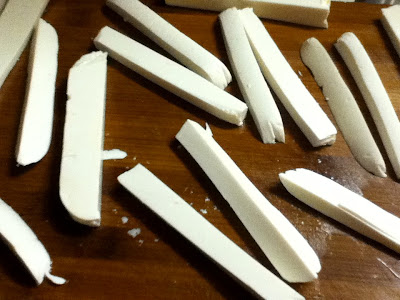 Put ¼ cup of the flour in one shallow bowl. In a second bowl, create the batter by combining the remaining flour, cornmeal, cornstarch, salt and garlic powder. The consistency should be like pancake batter. If it is too thick, add more water. If it’s too thin, add more flour. In a third shallow dish, combine the rice cereal, the spices and the grated parmesan to create the breading.

Heat about 3 inches of oil in a large pot to 350 degrees. Fry the mozzarella sticks, about 4 at a time, for about 5 minutes until they are golden brown and you see the cheese starting to ooze out. Turn them halfway through to make sure both sides get browned. Place on a cooling rack so they stay crisp. Serve while hot with a simple marinara sauce. Enjoy! 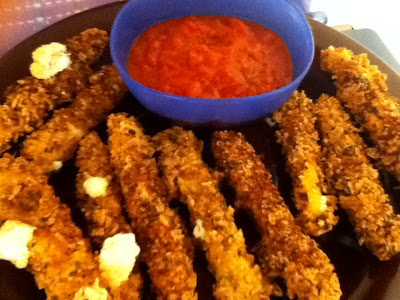 Sweet and Sour Cauliflower
Gluten-Free Pizza – Your Choice of Toppings